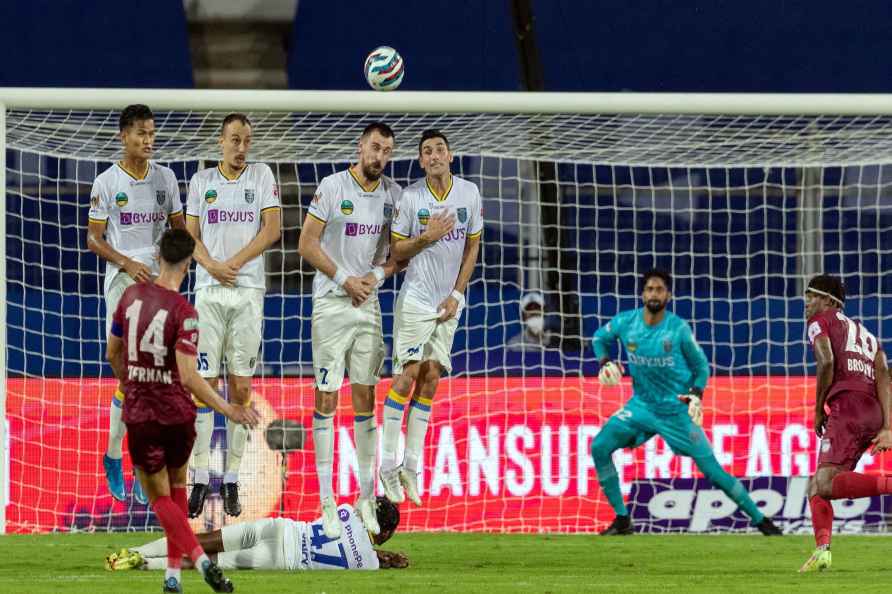 [Goa: Kerala Blasters FC players defend a free kick of Hernan Daniel Santana Trujillo of NorthEast United FC during match 7 of season 8 of Indian Super League played between NorthEast United FC and Kerala Blaster FC, at the Fatorda Stadium in Goa, Thursday, Nov. 25, 2021. (ISL/ /PTI] Goa, Nov 25 : FC Goa and Jamshedpur FC will look to register their first win in the Indian Super League 2021-22 match at the Athletic Stadium Bambolin here on Friday. Speaking to the media ahead of the game in the pre-match press conference, Juan Ferrando shared his thoughts on the performance in the last game and the team's plans for the future in regards to the youngsters. The season-opener saw Juan Ferrando name a fairly inexperienced line-up at the back. Leander D'Cunha and Sanson Pereira made their second ISL starts while Papuia made his ISL debut. While the trust might not be fully vindicated, Ferrando preached patience when it comes to the youngsters. "To be honest, I trust Leander, I trust Papuia and I have trust in Sanson. Of course, they don't have a lot of experience, but they can only get that experience when you play," added Ferrando. "Of course we lost, and I don't want to give an excuse for that. You can say that my plan was not a success, but I trust these players. I want that if FC Goa needs these players, they are ready to deliver. "I understand the talk about the lack of experience. But for me, as head coach, my most important job is to help them. They are our future. Of course their performances were not good. We have to do more work and then give them their chances. "If there remain faults, it's the fault of the head coach. If there are individual mistakes, we have to see how we can work with them in training and overcome them. "It was not so easy (to digest the result). In my point of view, our performance in the first game was not good. But now I am only thinking about tomorrow," stated Ferrando. "We are working on our plans and our style. Our performance against Mumbai was not good. Of course it's necessary to learn (from that) but we have to now focus on the next game. I think that is the important thing. We are not happy, but this is football. We have a new challenge tomorrow. And the most important thing is to focus on tomorrow's game." The loss in the season-opener was only the fifth time since the beginning of the 2017/18 season that Goa have gone down by a three-goal margin and the first time Ferrando further aired where he felt the team lacked. "In transitions when we lose the ball, it's important to be more compact between the lines. We need to control the spaces - when we are in attack or in build-up because if we lose the ball it's very important that we press immediately because the opponent has a lot of space," added Ferrando. - /IANS

Mumbai, Jan 10 : The latest promo of 'Bigg Boss 15' has made a confirmed announcement that the show is going to be extended for two weeks. In the promo, host Salman Khan informs the housemates t […]

Mumbai, Jan 10 : Acclaimed actor Pankaj Tripathi is all set to bring one of his most loved roles as Madhav Mishra with the third instalment of courtroom drama web show 'Criminal Justice'. Accord […]