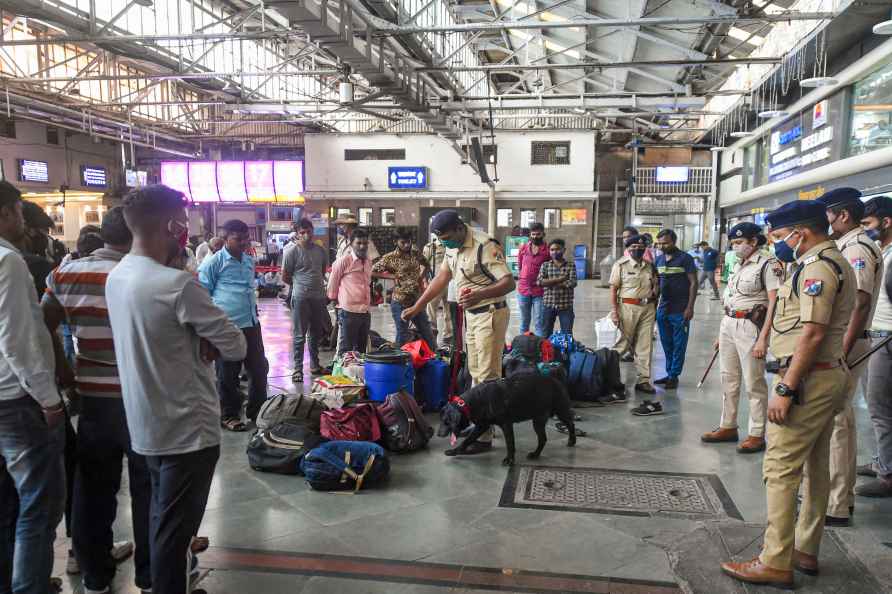 [Mumbai: Railway police personnel carry out a security check at Chatrapati Shivaji Maharaj terminus, one of the sites of the 2008 Mumbai terror attacks that had claimed 166 lives, on the eve of the 13th anniversary of the gruesome incident, in Mumbai, Thursday, Nov. 25, 2021. ( /PTI] By Arul Louis New York, Nov 25 : As 13th anniversary of the 26/11 Mumbai terrorist attack rolls around, Tahawwur Hussain Rana, a Pakistani Canadian, is in detention awaiting a ruling on extradition to India, and four others, who have been charged in a US court, are on a wanted list of the US government in its attempts to crackdown on the alleged collaborators. Prisoner Number 22829-424 Rana is being held at the Los Angeles Metropolitan Detention Centre, a check on the Bureau of Prisons database on Wednesday showed. Rana's childhood friend, Pakistani American Daood Sayed Gilani who goes by the Western-sounding name David Coleman Headley, is serving a 35-year sentence after a federal judge convicted him on charges of helping carry out the Mumbai attacks. He turned approver to avoid getting the maximum sentence of life in prison and testified against Rana. He was also declared an approver in India and a Mumbai sessions court pardoned him in 2015 and accepted him as a prosecution witness. With the alleged help of Rana, he got a business visa for India and conducted surveillance for the terror attacks that killed more than 170 people, including six Americans. Sajid Mir of the Lashkar-e-Tayyiba (LeT), who was charged in a federal court in Chicago in connection with the 2008 attack, is a fugitive on the FBI's Most Wanted Terrorist list with a $5 million bounty on his head. The State Department's Rewards for Justice (RfJ) counter-terrorism programme that offers a bounty for information leading to his capture says that he "served as a 'handler' for David Headley and others who were directed to carry out actions relating to planning, preparing for, and carrying out terrorist attacks on behalf of LeT." Along with him, three others who were also charged in the case, are on the RfJ list. They are Major Iqbal, who allegedly funded and planned the 26/11 attack; Abu Qahafa the alleged trainer of the attackers, and Mazhar Iqbal alias Abu al-Qama, who is a commander of the LeT, according to the RfJ. The four are residents of Pakistan, it said. Rana was acquitted in a federal trial in Chicago on a charge of providing material support for the 26/11 attack, but convicted of helping the LeT and participating in a terrorist plot against a Danish newspaper and sentenced in 2013 to 14 years in prison. He was temporarily released on compassionate grounds because of the Covid-19 pandemic, but was arrested immediately on a federal court warrant in June last year in connection with the extradition request from India and is still in custody. Federal Magistrate Judge Jacqueline Chooljian in Los Angeles ordered the government and the defence to file documents supporting their respective pleas before July 15. In their filing, Rana's lawyers maintained that Headley's testimony against him implicating him in the Mumbai attack was not reliable because he was an approver and that since he has been acquitted on the charges relating to 26/11 by the Chicago court he could not be extradited to face similar charges under their interpretation of the extradition treaty. The government said in its filing that Rana and his partner in the immigration and travel business filed fake documents for an Indian visa making Gilani "regional manager supervising and consulting our operation in the Asian region" to enable him to operate in India. Gilani used that cover to gather intelligence for the LeT to carry out the attacks in Mumbai. Gilani kept Rana aware of his activities and he "became aware of how the terrorists were going to attack targets in Mumbai, that people would likely die" but did not distance himself from the conspirators, the government said. As the case now stands, the last filing was by the government lawyers was on July 21 making technical arguments about a point made in the defence document that it said was "beyond the scope" laid down by the court. The Covid-19 pandemic has hampered the progress of the extradition case by limiting direct hearings. According to court documents from the government, Rana and Gilani shared quarters at the Cadet College Hasan Abdal "and remained friends throughout their lives". Rana became a Pakistani Army doctor reaching the rank of captain, but immigrated to Canada. After becoming a Canadian citizen, he moved to Chicago and ran a travel and immigration business. When Gilani was arrested on drug trafficking charges, Rana put up his house as surety for Gilani's bail. Gilani was attacked in a Chicago area federal prison in 2018 and had to be hospitalised, according to media reports. /IANS

In US crackdown on 26/11 terrorism, Rana awaits extradition ruling, 4 on wanted list
[Mumbai: Railway police personnel carry out a security check at Chatrapati Shivaji Maharaj terminus, one of the sites of the 2008 Mumbai terror attack

In US crackdown on 26/11 terrorism, Rana awaits extradition ruling, 4 on wanted list

[Mumbai: Railway police personnel carry out a security check at Chatrapati Shivaji Maharaj terminus, one of the sites of the 2008 Mumbai terror attacks that had claimed 166 lives, on the eve of the 13 […]

6th Convocation of University of Agricultural and Horticultural Science

New Delhi, Nov 25 : The Delhi unit of the BJP has taken upon itself the onus to ensure a complete Covid-19 vaccination coverage in the national capital and its adjoining areas by personally reaching o […]