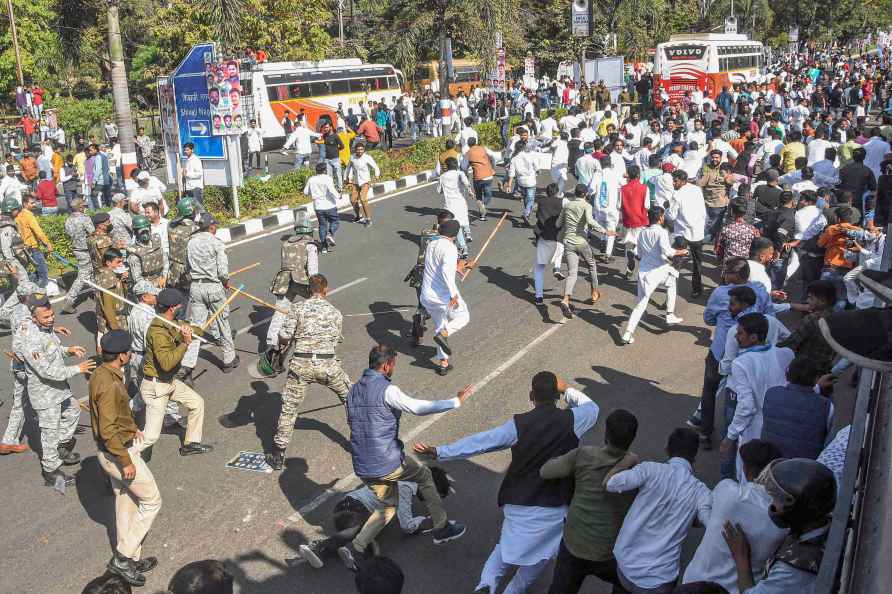 [Bhopal: Police cane charge to disperse National Students' Union of India (NSUI) activists during their protest against new education policy, outside CM's residence in Bhopal, Thursday, Nov. 25, 2021. ( /PTI] Bhopal, Nov 25 : A protest organised by the National Students Union of India (NSUI) against the new education policy at the residence of Madhya Pradesh Chief Minister Shivraj Singh Chouhan here on Thursday turned into a melee. Students' associations along with NSUI, the youth wing of the Congress, have launched a protest against the new education policy and in a show of aggression they tried to reach the Chief Minister's official residence in Bhopal. NSUI members along with Congress workers first gathered at their party office and marched towards Chouhan's residence. However, Bhopal police barricaded the area. NSUI members tried to cross the barricades resulting in an argument between the police and the protesters. The protesters started pelting stones and tried to cross the police barricades forcefully. Seeing the situation getting out of hand, the police resorted to a lathicharge to disperse the crowd, in which several students got injured and were rushed to hospital for treatment. The police have detained several NSUI members and sent them to jail. NSUI members have been protesting against the new education policy in various districts of the state for the last few days and they had announced to end their protest in Bhopal. "They were allowed to organise a peaceful protest but they tried to break the barricades and pelted stones at the police. The police tried to calm the NSUI members but seeing the situation get out of control, there was no option except to allow police to lathicharge to disperse the crowd," said a senior police officer. Kamal Nath, the Madhya Pradesh Congress President and former Chief Minister, condemned the police action. "Students were protesting peacefully to make their voice heard. They were demanding release of pending scholarships of tribal students along with raising other issues. But Shivraj Singh Chouhan government beat up the students brutally and has arrested them," Nath said. /IANS

Ottawa, Nov 25 : More than 1.3 million Canadian children, or 17.7 per cent, live in poverty, according to an annual report issued by Campaign 2000. That is a pretty significant number of kids wh […]