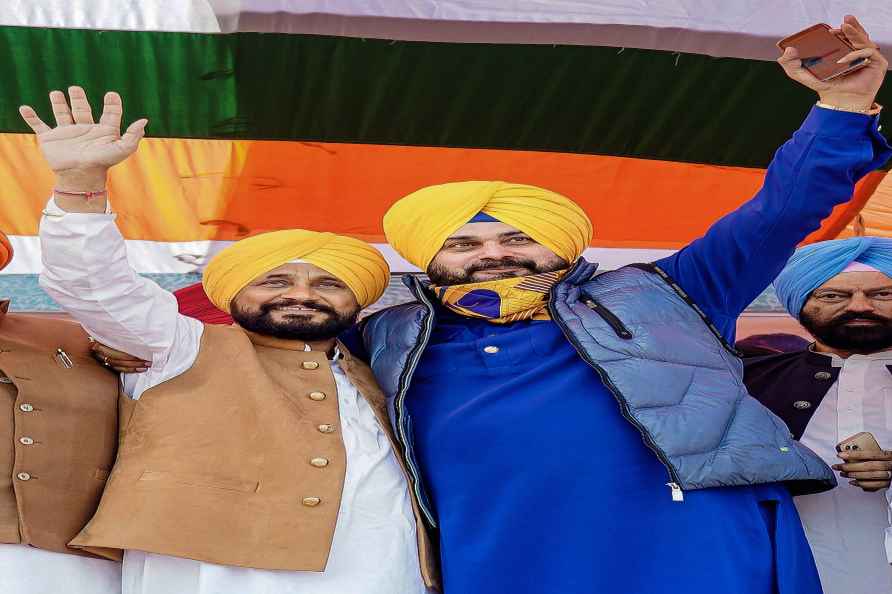 [Moga: Punjab Chief Minister Charanjit Singh Channi and President of Punjab Congress Navjot Singh Sidhu during a rally at a local grain market, ahead of Punjab Legislative Assembly Elections 2022, in Moga, Thursday, Nov. 25, 2021. ( /PTI] Chandigarh, Nov 25 : In an attempt to expose a 'nexus' between the Badal family and his party's former leader and Punjab Chief Minister Amarinder Singh, state Congress president Navjot Singh Sidhu on Thursday said as a Cabinet minister he had proposed a new law to recover stolen state taxes from cable TV business company Fastway Transmissions but was stalled by the latter. Fastway Transmissions is the company that came to enjoy monopoly over the cable TV business in the state during the Badal regime, now led by Shiromani Akali Dal President Sukhbir Badal. According to Sidhu, Fastway has three-four times TV connections than data it is sharing with the government. "Badals made laws to protect its monopoly... @capt_amarinder stalled my proposed law which would have ended fastway monopoly, got revenue for state per connection & reduced TV cable prices for people to half," Sidhu said in a tweet. In another tweet, he said: "Take away the cause & effect will seize! In 2017 I proposed a new law to recover stolen state taxes from fastway by taking control over computers & data hidden by fastway monopoly. It would have freed the cable operators from clutches of this monopoly and filled state coffers!!" Sidhu, bete noire of Amarinder Singh, further said that his five-year fight is against those who monopolised cable network under political patronage of Badals. "5 yrs ago, I put forward policy to get rid of Multi Systems Operator - Fastway's monopoly, to recover 1000s of crores taxes, empower local operators & give cheap cable to people without necessary action against fastway, it is erroneous to suggest solution of Punjab's cable woes," he tweeted. Earlier, the cricketer-turned-politician had claimed that the cable TV network 'scam' was much bigger if central taxes of "thousands of crores" too were taken into account. Declaring a war against the cable mafia, Chief Minister Charanjit Singh Channi earlier this week announced to fix the monthly rate of a cable TV connection at Rs 100 to eliminate cartelisation across the state. Channi said all such businesses of transport and cable are owned by the Badal family and now the people need not pay more than Rs 100 per month, adding that strict action would be taken against those not adhering to the new rates. /IANS