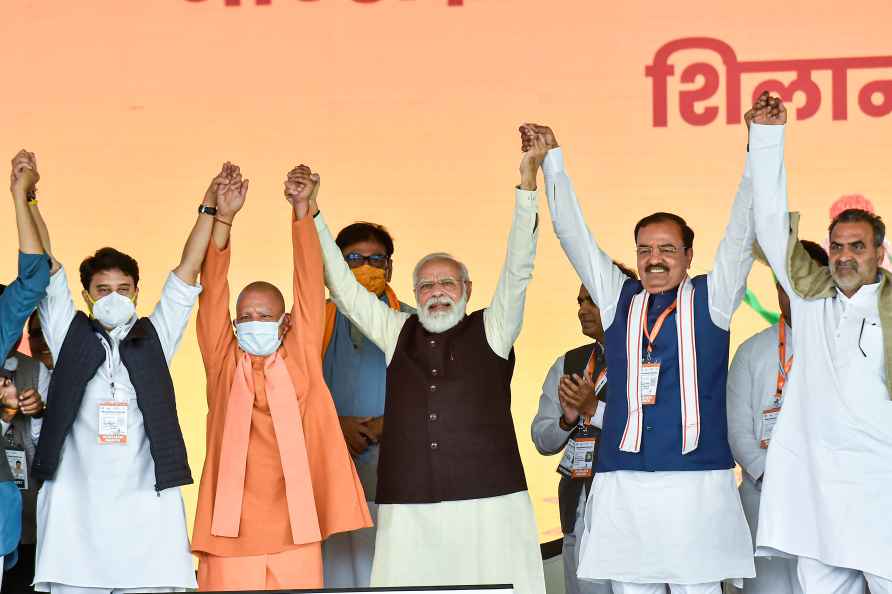 [Gautam Buddha Nagar: Prime Minister Narendra Modi (C) with Uttar Pradesh Chief Minister Yogi Adityanath (2L) and other BJP leaders during the foundation laying ceremony for the Noida International Airport at Jewar, in Gautam Buddha Nagar district, Thursday, Nov. 25, 2021. Deputy Chief Minister of Uttar Pradesh Keshav Prasad Maurya and BJP MP Jyotiraditya Madhavrao Scindia are also seen. ( /PTI] Gautam Budh Nagar, Nov 25 : Ahead of Uttar Pradesh Assembly elections, Prime Minister Narendra Modi on Thursday inaugurated Noida International Airport at Jewar, after inaugurating several big ticket projects in Purvanchal and Bundelkhand earlier. Modi laid the foundation stone of the UP's fifth international airport in at Jewar. This greenfield airport will be India's first pollution-free. Uttar Pradesh Chief Minister Yogi Adityanath, Deputy Chief Minister Keshav Prasad Maurya, Union Civil Aviation Minister Jyotiraditya Scindia, Union Ministers Sanjeev Balyan, S.P. Singh Baghel, former Union Minister and Noida MP, Mahesh Sharma, were present on the occasion among others. This international airport will be the largest in Asia and the fourth largest in the world and with this Uttar Pradesh has become the first state in India to have five international airports. This will be the second international airport in the NCR. This will also help in reducing massive traffic at the Indira Gandhi International Airport. There was a demand for such an international airport in this area for the last 30-35 years. In the next three years, that is by 2024, flight services will start from this airport and about 1.2 crore passengers will be able to fly from here every year. This will benefit crores of people living in western Uttar Pradesh's Noida, Bulandshahr, Aligarh, Hapur, Ghaziabad, Meerut and adjoining districts of NCR regions and will also boost commercial and industrial activities in this area. The development of the first phase of Noida International Airport is being done at a cost of more than Rs 10,050 crore, although the construction of this airport is likely to cost Rs 34-35,000 crore. It is spread over an area of more than 1,300 hectares. This airport is being constructed by Zurich Airport International AG. The ground work of the first phase that is, land acquisition and rehabilitation of the affected families, has been completed. More than one lakh people are likely to get jobs and employment opportunities. Along with this, due to the development of this area, 5 lakh people are also likely to get self-employment opportunities. This airport will also become the gateway to logistics for northern India as an airport is being built as an integrated multi-modal cargo hub for the first time in India. The capacity of the dedicated cargo terminal will be 20 lakh metric tonnes, which will be increased to 80 lakh metric tonnes. All nearby major routes and highways, such as Yamuna Expressway, Western Peripheral Expressway, Eastern Peripheral Expressway, Delhi-Mumbai Expressway and other such expressways will also be connected to the airport. There are also plans to connect the airport with the proposed Delhi-Varanasi high speed rail, which will reduce the travel time between Delhi and the airport to just 21 minutes. This will be the first airport in India where emissions will be net zero. The airport has earmarked a dedicated plot where trees to be removed from the project site will be planted. In this way it will be given the form of a jungle park. Along with protecting all the native animals here, full care of nature will be taken during the development of the airport. /IANS

IND v NZ: There was a bit of bounce but pitch will still assist spinners, says Pujara
[Kanpur: Indian player Cheteshwar Pujara plays a shot during day one of the 1st test cricket match between India and New Zealand, at Green Park stadiu

TN administers 76% of population with first dose of vaccine

Chennai, Nov 25 : Tamil Nadu Health Minister Ma Subramanian has said that the state has inoculated 76 per cent of its population with the first dose of vaccine. In a statement on Wednesday, the […]

Rupee falls 11 paise to close at 74.51 (provisional) against US dollar.