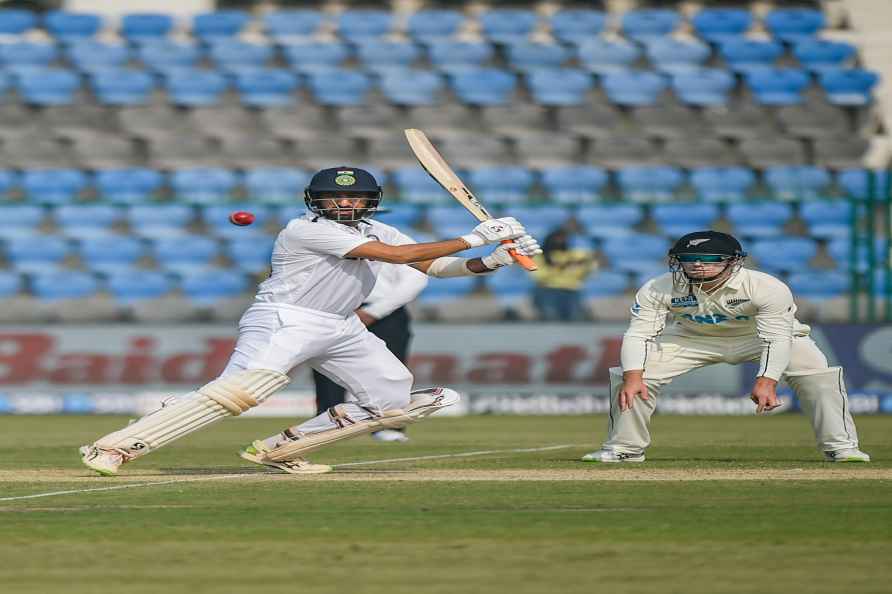 [Kanpur: Indian player Cheteshwar Pujara plays a shot during day one of the 1st test cricket match between India and New Zealand, at Green Park stadium in Kanpur, Thursday, Nov. 25, 2021. ( /PTI] Kanpur, Nov 25 : India vice-captain Cheteshwar Pujara believes that spin will soon come into the equation at the Green Park Stadium here on Thursday. He added that the pitch was on the slower side with a bit of bounce the last time the two teams played here in 2016. Pujara is serving as the vice-captain for the first Test against New Zealand. " "It is an honour to be a part of this team. The way the guys have played over a couple of years, so it is an added responsibility, and looking forward to it. This track was a bit slow the last time we played here, but did spin later. There was a bit of bounce but will still assist spinners. 'et's see how it progresses," said Pujara in a pre-match chat with the broadcasters. Talking about his preparation for the Test series, Pujara remarked, "It (preparation) has been good. I was part of the IPL. Though I didn't play any matches there, I was training and preparing whenever I got time. So, preparation-wise, it has been good. We also had a good practice session of three to four days in Mumbai. So far, preparation has been really good and really looking forward to playing a couple of Test matches at home because we haven't played a lot of cricket at home for a while now. Really good opportunity for us to play at home." The 33-year-old feels that the absence of first-choice players from the series presents a chance for the younger lot to do well, giving an example of how they did well in the 2-1 Border Gavaskar Trophy win earlier in the year. "It is an opportunity for young players to represent the Indian team and try to prove themselves as we have got exceptionally talented players, like we saw during the series against Australia. When the senior players got injured, the younger players stepped up to take the responsibility. It (responsibility) is there obviously but I don't think I should think too much about it. Just go out in the field and play your natural gam' and don't think too much about the final outcome. Their absence does give the others a chance to prove th"mselves." /IANS

New Delhi, Dec 1 : A Border Security Force (BSF) jawan who accidentally crossed the International Border in Punjab's Abohar sector was apprehended and later released by the Pakistan Rangers. He crosse […]

Chandigarh, Dec 1 : To give further impetus to the growth of the state's textile sector and provide a comprehensive support framework for the industry to grow, the Haryana government on Thursday appro […]