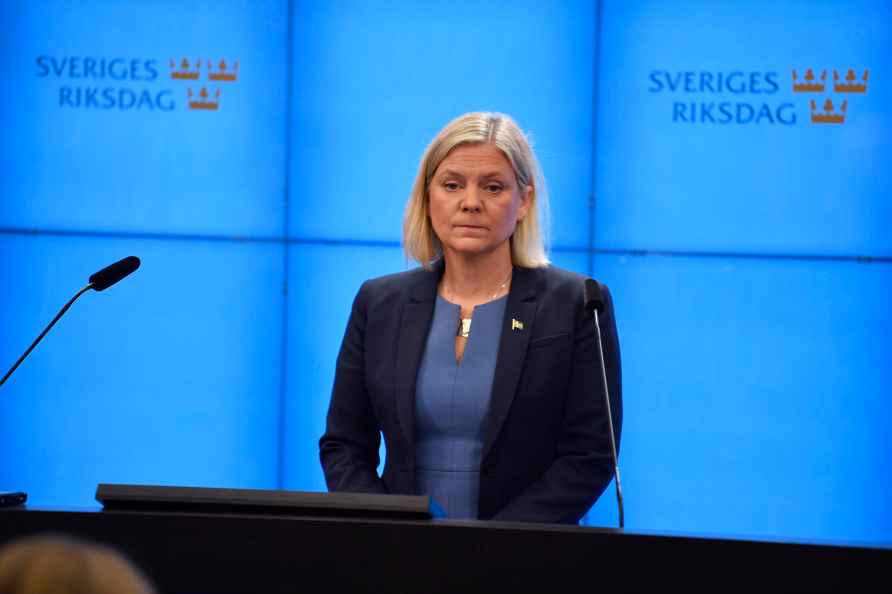 Stockholm, Nov 25 : Shortly after Social Democrat leader Magdalena Andersson was elected by Parliament as Sweden's first female Prime Minister, she tendered her resignation after facing the harsh reality of having to lead a minority coalition government. Just hours after she was elected the Prime Minister on Wednesday, Parliament (Riksdag) passed the opposition's budget proposal prompting Andersson's coalition partner the Green Party to pull its support. This, in turn, forced Andersson to announce her resignation, reported Xinhua news agency. Wednesday's events were a result of the inconclusive outcome of the 2018 elections, which led to a lengthy process of finding a government in a political landscape where certain parties do everything in their power to block their ideological opponents from having any form of influence. In comparison, the election of Andersson was a breeze. To be elected prime minister, she only needed a majority of lawmakers in the 349-seat Riksdag not voting against her. She was backed by 117 but rejected by 174, with 57 deputies abstaining. One deputy was absent. Andersson's election followed an 11th-hour deal with the Left Party, which demanded a raise in pensions for around 7,00,000 of the poorest pensioners in return for not pressing the red button. However, later in the day the ruling coalition's budget proposal was voted down in favour of the budget proposed jointly by the Moderate Party, the Sweden Democrats and the Christian Democrats. This came after the Center Party, which accepted Andersson as the prime minister in an attempt to shut out the anti-immigration Sweden Democrats, decided not to vote for the government's budget proposal, as they saw the deal as too sharp a turn to the Left despite the fact that the government had also made concessions to appease the Center Party. Andersson, who since 2014 has served as the finance minister under former Prime Minister Stefan Lofven, said that she could lead the country with the opposition's budget, describing it as requiring only minor tweaks. However, the Green Party had a different opinion. After the Riksdag passed the opposition's budget, the Greens announced that they would leave the government as they could not stand behind a budget negotiated by the Sweden Democrats. The Riksdag will now have to elect a new prime minister. The Green Party has said they would support Andersson, who in turn said she was prepared to lead a single-party government. /IANS

Macron "optimistic" for 2022, warning upcoming "few difficult weeks"
Paris, Jan 1 : French President Emmanuel Macron has said that he is "resolutely optimistic for the coming year" for France, despite the upcoming few d

Italian Prez thanks citizens for sense of responsibility in New Year speech
Rome, Jan 1 : In what was due to be his last New Year speech as the country's President, Sergio Mattarella has thanked Italians for their "maturity an

Ankara, Jan 1 : Turkish President Recep Tayyip Erdogan has reiterated his government's 2023 goal to include Turkey among the 10 largest economies in the world. In a message to mark the new year, […]

Paris, Jan 1 : French President Emmanuel Macron has said that he is "resolutely optimistic for the coming year" for France, despite the upcoming few difficult weeks amid Covid-19 cases resurgence. […]

Rome, Jan 1 : In what was due to be his last New Year speech as the country's President, Sergio Mattarella has thanked Italians for their "maturity and sense of responsibility" during the two years of […]