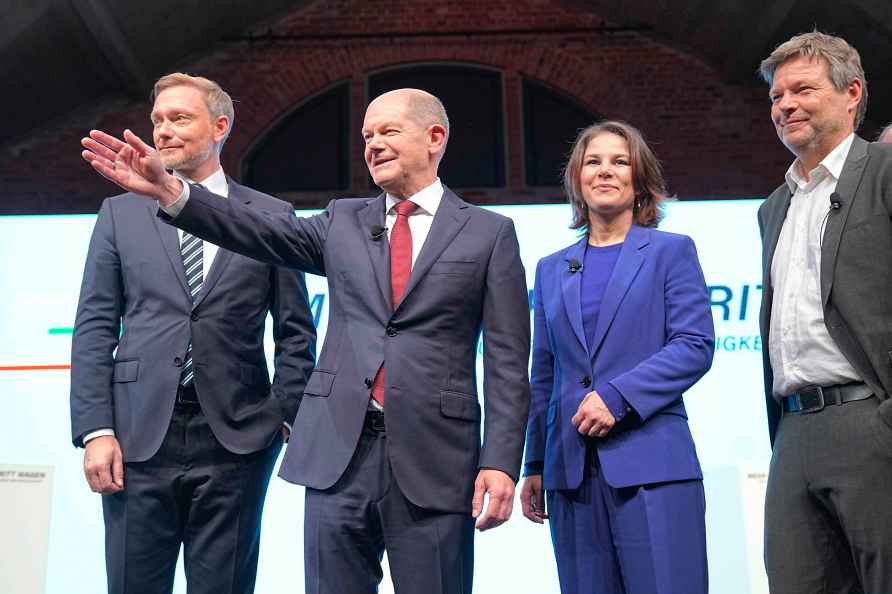 [Berlin: From left, Christian Lindner, party leader of the FDP, Olaf Scholz, SPD candidate for chancellor and executive federal minister of finance, Annalena Baerbock, federal leader of the Green party and Robert Habeck, federal leader of the Green party at a joint news conference in Berlin, Germany, Wednesday, Nov. 24, 2021. After weeks of negotiations the leaders of the three parties present a coalition contract for a new German government. /PTI] London, Nov 24 : Signalling an end to the Angela Merkel era in Germany, the Social Democratic Party (SDP), which had upstaged her Christian Democratic Union in the September 26 elections, announced on Wednesday that it would lead the new coalition government, with transition to a green economy being the primary focus area. Announcing a deal with the Greens and Free Democrats, SPD leader Olaf Scholz, who will be the new Chancellor, highlighted greater progress in a coalition "on equal terms", the BBC reported. Scholz, who was for long Merkel's Vice Chancellor, however, noted that the three parties' rank and file had to approve what has been labelled their "traffic-light" coalition, because of the parties' red, yellow and green colours. Measures to deal with climate change are a major part of the coalition deal, with the parties aiming to phase out coal use by 2030, eight years ahead of schedule, use 2 per cent of the country's territory for wind power, and focus on hydrogen-based energy too. By 2030, the parties want 80 per cent of electricity to be sourced from renewable energy and 15 million electric cars to be on German roads. Addressing a news conference, Scholz said that "sovereignty of Europe is a cornerstone of our foreign policy", while highlighting Germany's friendship with France and partnership with the US. Greens leader Annalena Baerbock, who led her party to one of its strongest showings, said: "We can transform our economy so it becomes climate neutral. We have an agreement where climate neutrality is a common denominator." She is expected to become Foreign Minister in the new government, while her Greens co-leader Robert Habeck gets the role of Vice Chancellor as well as overseeing energy transition. Free Democrats leader Christian Lindner is tipped to be the new Finance Minister. Scholz's party got 206 seats in the 735-member Bundestag, slightly ahead of Merkel's party (196), while the Greens got 118 and the Free Democrats 92. The right-wing AfD got 83. /IANS

Germany to get 'traffic light' government led by SPD's Scholz

[Goa: Javi Hernandez of Odisha FC celebrates his goal during match 6 of season 8 of Indian Super League football tournament between Odisha FC and Bengaluru FC, at the Tilak Maidan Stadium, in Goa, Wed […]

Jennifer Lawrence got 'high' while shooting for 'Don't Look Up'

Los Angeles, Nov 24 : Actress Jennifer Lawrence, who portrays Kate Dibiasky in the new political comedy 'Don't Look Up', has revealed that in order to immerse herself in her character, a PhD student a […]