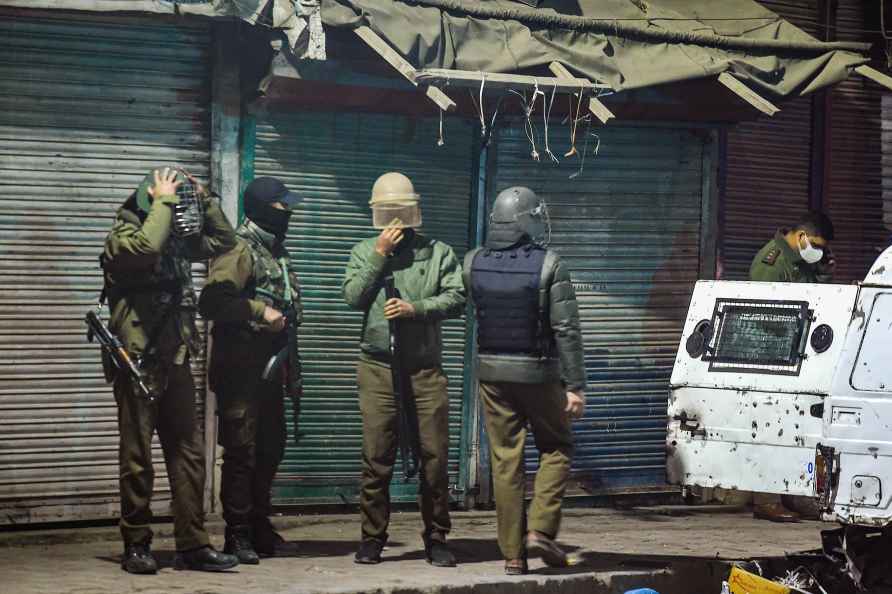 [Srinagar: Security personnel stand guard after an encounter with militants near the Rambagh area of the city in Srinagar, Wednesday, Nov. 24, 2021. Three unidentified militants were killed in a brief shootout, police said. ( /PTI] Srinagar, Nov 24 : Three unidentified terrorists were killed in an encounter at Rambagh in Jammu and Kashmir's Srinagar district on Wednesday, officials said. "Police neutralised 03 terrorists in Srinagar. Identification and affiliation of the killed terrorists is being ascertained," police said. The firefight between terrorists and security forces took place after a joint team of the police and the army cordoned off the area and launched a search operation on the basis of specific information about presence of terrorists. As the security forces zeroed in on the spot where terrorists were hiding, they came under a heavy volume of fire and retaliated, triggering the encounter. /IANS

Europe turning a new page between 2021 and 2022
[Grohnde:Steam rises from the cooling towers of the Grohnde nuclear power plant near Grohnde, Germany, Wednesday, Dec. 29, 2021. Germany on Friday, De

Seoul, Dec 30 : South Korean President Moon Jae-in on Thursday urged health authorities to come up with sustainable containment measures against Covid-19, as the nation is struggling to cope with a re […]

Dhaka, Dec 30 : Bangladesh will administer 40 million doses of Covid-19 vaccines every month from January next year, a Minister has said. "We are taking the initiative to give vaccines in every […]

Bengaluru, Dec 30 : Bottom-placed team Puneri Paltan and defending champions Bengal Warriors will hope to make a comeback when they take on Tamil Thalaivas and Patna Pirates respectively, on Day 10 of […]