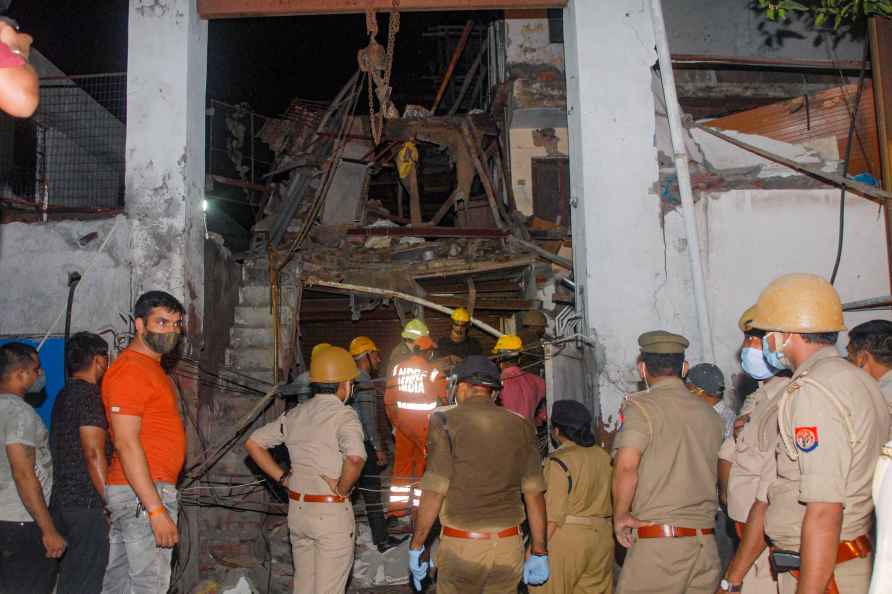 Chennai, Nov 23 : Four houses in Tamil Nadu's Salem district collapsed on Tuesday as heavy rains continued to lash the state, authorities said, adding that four people were believed to be trapped in the debris, while 13 others have been rescued and shifted to a hospital for treatment. Police and Fire and Rescue personnel are involved in the rescue operations currently underway in Karungalpatti area. A team of the National Disaster Response Force (NDRF) is also likely to reach the affected area. The Regional Centre of the India Meteorological Department (IMD) issued a yellow alert for Tamil Nadu for Tuesday and Wednesday and an orange alert for Thursday and Friday. The alerts were isuued following the possibility of the formation of a low pressure and a cyclonic circulation over the southeast Bay of Bengal and neighbourhood extending up to 3.1 km above mean sea level. Heavy showers in several parts of Chennai have led to waterlogging and the Greater Chennai Corporation (GCC) has deployed pumps to flush out the excess water. According to the GCC officers, 794 pumps have been deployed. However, many parts of T. Nagar are inundated including GN Chetty Road, Bazulla Road and North Usman Road. A local flower trader at T. Nagar told IANS: "I do not know what these officials are doing. Heavy rainfall leads to waterlogging in our shops, homes, and other establishments. Water gushing out from our premises has become our priority and not the GCC's as we have to clear it to resume our business and other activities." He said that the water that has entered several homes, in the low-lying areas of T. Nagar, is being flushed out. /IANS

Weather likely to remain dry till new year eve in Kashmir
Srinagar, Dec 29 : Minimum temperature remained below the freezing point in Kashmir and Ladakh on Wednesday as the weather office forecast a snowless

Instagram to 'double down' on video, focus on Reels in 2022: Report

San Francisco, Dec 29 : In a video message, Meta-owned photo-sharing platform Instagram's head Adam Mosseri said that the platform will "double down" on video and focus on Reels in the upcoming year. […]

Child births in S.Korea lowest since 1981

Seoul, Dec 29 : The number of babies born in South Korea plunged in October, the lowest tally since 1981, highlighting the country's bleak demographic situation with the chronically low birth rate, da […]