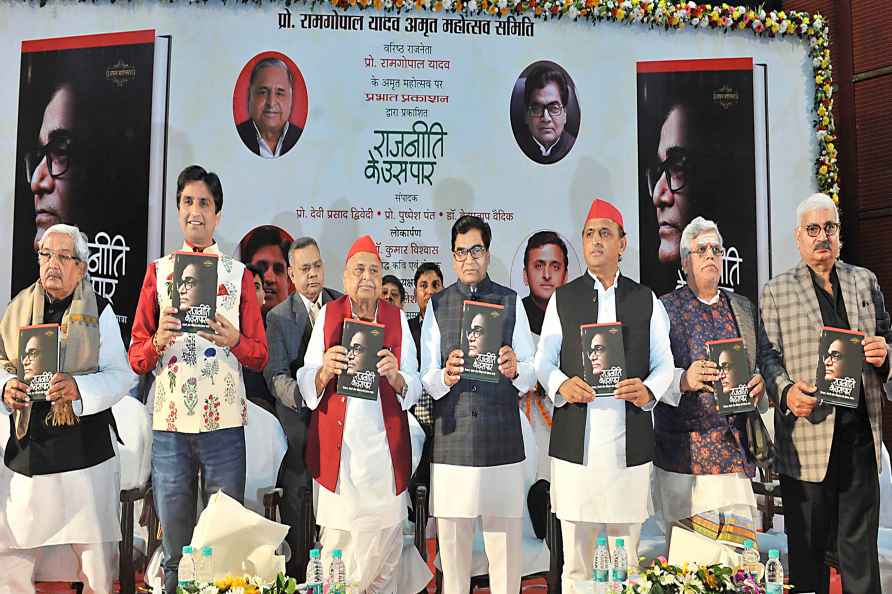 [Lucknow: MP Ram Gopal Yadav with former union minister Mulayam Singh Yadav, Samajwadi Party President Akhilesh Yadav, poet Kumar Vishwas and other dignitaries, during the release of his book 'Rajneeti Ke Us Paar', in Lucknow, Tuesday, Nov.23, 2021. ( /PTI] Lucknow, Nov 23 : Pragatisheel Samajwadi Party Lohia (PSPL) president Shivpal Yadav has given a one-week ultimatum to his estranged nephew and Samajwadi Party (SP) chief Akhilesh Yadav to take a decision on an alliance or a merger. "We are ready to merge with the SP. If this does not happen within a week, we will hold a conference in Lucknow and take a decision after consulting our people," Shivpal told reporters. Shivpal also met SP supremo Mulayam Singh Yadav in Lucknow on Monday night and is said to have discussed the issue with him. "Our priority is to forge an alliance with the SP. On Netaji's (Mulayam's) birthday, the people of the entire state were hoping for an alliance. Whatever happens, it should be quick," he added. "Netaji' has not only taught us, but has also taught us the stakes of wrestling and the tricks of politics too. There is strength in unity. If there is division in the family, then there are many drawbacks. We want 100 seats for our supporters, but now we have backed down. We bowed down. It has been two years today saying this, but nothing has been finalised yet." He further said that "along with the alliance, SP should give tickets to those who are in a win-win situation. We are ready for a merger. Time is running out and a decision should be taken soon". The PSPL chief said that he has always made sacrifices. "If I wanted, I could have become the chief minister in the year 2003, but I had called Netaji from Delhi and made him the chief minister after Mayawati pulled out of the BJP coalition. At that time, 25 MLAs of BJP were also with us. Ajit Singh, Kalyan Singh were also with us," he added. Shivpal said that "people used to call PSPL a small party, but after the 'Samajik Parivartan Yatra' rolled out from Mathura, people have come to know that we are a force to reckon with". /IANS

1st Test, Day 3: S Africa 21/1 at lunch, after bowling out India for 327
[Pretoria: India's bowler Jasprit Bumrah, bottom left, is attended by team physio Nitin Patel after hearting his ankle, during the third day of the Te