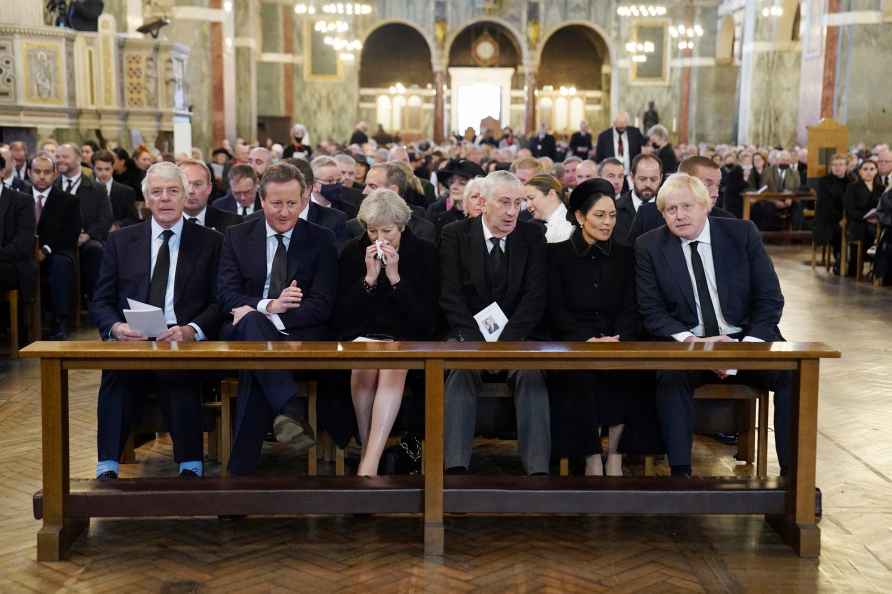 [London: From left; former British Prime Ministers John Major, David Cameron and Theresa May, Speaker of the House of Commons Lindsay Hoyle, Home Secretary Priti Patel and British Prime Minister Boris Johnson attend a Requiem Mass for slain member of parliament David Amess, inside Westminster Cathedral, central London, Tuesday, Nov. 23, 2021. Amess was killed during a constituency surgery in Leigh-on-Sea in Essex on October 15. Ali Harbi Ali, 25, has been charged with his murder and also with preparing acts of terrorism between May 1, 2019 and September 28 this year. /PTI] London, Nov 23 : Around 10,000 calls were made to British counter-terrorism police in 2021, a top official has said. Around a fifth of reports from the public provided useful intelligence, which helped counter-terrorism investigations, London Metropolitan Police special operations chief Matt Twist said. Following recent acts of terrorism in Liverpool and Essex, the police has urged Londoners to be vigilant in crowded spaces as the busy festive season begins, reports Xinhua news agency. "It has been two years since we've been able to get together and enjoy London in all its festive glory with some degree of 'normality'," Twist said. "Tragically, we've seen two terrorist attacks in Essex and Merseyside over the past few weeks, and as a result, the terrorism threat level has been raised from 'substantial' to 'severe'." Mayor of London Sadiq Khan has announced that the city's New Year's Eve celebrations will return this year, after being scrapped in 2020 because of the Covid-19 pandemic. The event will be held in London's Trafalgar Square, but the fireworks display will not take place this year. A taxi exploded at a hospital in Liverpool of England on November 14, leaving one dead and another injured, which has been treated as a terrorist incident, according to the Merseyside police. British police has also charged in October a man with the murder of lawmaker David Amess in a church and the preparation of terrorist acts. /IANS

Gorakhpur, Sep 28 : Actor-cum-politician Ravi Kishan has allegedly been duped of Rs 3.25 crore, police said. Kishan, who is the MP from Gorakhpur Sadar and a film actor, has filed a complaint at […]