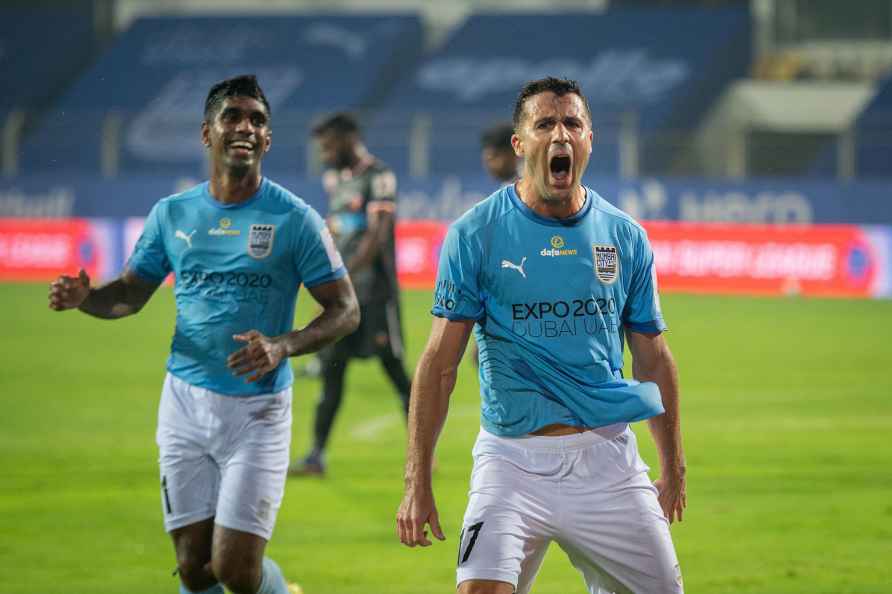 [Goa: Igor Angulo of Mumbai City FC celebrates a goal during match 4 of season 8 of Indian Super League played between Mumbai City FC and FC Goa at the Fatorda Stadium in Goa, Monday, Nov. 22, 2021. (ISL/ /PTI] Margao (Goa), Nov 22 : Reigning Indian Super League (ISL) champions Mumbai City FC will hope to display their firepower upfront when they begin their new season in the top league against FC Goa at the Pandit Jawaharlal Nehru Stadium here later on Monday. Mumbai City FC may have lost a few of their core players from the side that won the glittering trophy last season, but they still have a very balanced side to take on FC Goa, who have stuck to an almost same set of players that played last season under Spanish coach Juan Ferrando. In the last five games, Mumbai City FC have won three and shared the spoils in the remainder, which also includes the ISL final last season. Following their historic season, in which they claimed the League Winners Shield and the League title, the Islanders have hardly played competitive football. However, the Des Buckingham-led side remained unbeaten in the three pre-season matches, with a win over Hyderabad FC and draws against Odisha FC and SC East Bengal. FC Goa have emerged victorious in each of their last five competitive matches, en-route to their 2021 Durand Cup win in Kolkata recently. FC Goa finished fourth in the league table last season, having won seven matches, losing on three occasions and sharing points in 10 of the remaining matches to qualify for the semifinals. It was incidentally against Mumbai City FC that the Ferrando-led side lost over a two-legged semifinal and crashed out of the title race. Both the teams have played 18 matches amongst themselves so far, with FC Goa leading the head-to-head count with seven wins. Mumbai have won five, while they've shared the honours in the remaining six occasions. Mumbai City FC have lost just one out of their last five matches against FC Goa. However, both teams played out goalless draws in each leg of the semifinals last season, with the Islanders sneaking into the final via a penalty shootout. The last time FC Goa defeated their rivals was February 2020, when the match ended 5-2 in favour of the Goan outfit. Mumbai City FC will be missing the services of Moroccan playmaker Hugo Boumous, strikers Bartholomew Ogbeche and Adam le Fondre, but last year's golden boot winner Igor Angulo has been roped in, while Australian midfielder Brad Inman is another major signing. Among other imports, Brazilian midfielder Gabriel Cassio and compatriot Ygor Catatau would be making their debut in the ISL. While head coach Sergio Lobera is no longer there to guide the side, former Wellington Phoenix FC coach Buckingham has been handed the responsibility of the Mumbai outfit ahead of the new season. The onus is on the Englishman to deliver the goods and kick-start their title defence with a win. /IANS

Meet the real 'heroes' of 1983 who changed the fortunes of cricket in India
[Mumbai: Bollywood film actor Ranveer Singh (L) and former Indian cricketer Kapil Dev pose for pictures during the premier of the movie '83', which is

Bengaluru, Dec 22 : Forty-eight hours have passed since a college-going girl ended her life for being unable to cope up with the continuous eve-teasing she faced at the hands of some boys from her nei […]

Hyderabad, Dec 22 : In a spike in Omicron cases, Telangana on Wednesday reported 14 new infections taking the state's tally to 38, a top health official said. Of the new cases, 12 were detected […]

Mumbai, Dec 22 : The six-member Monetary Policy Committee of the Reserve Bank of India had unanimously agreed on retaining the repo rate at its last meeting, but not all members favoured continuation […]