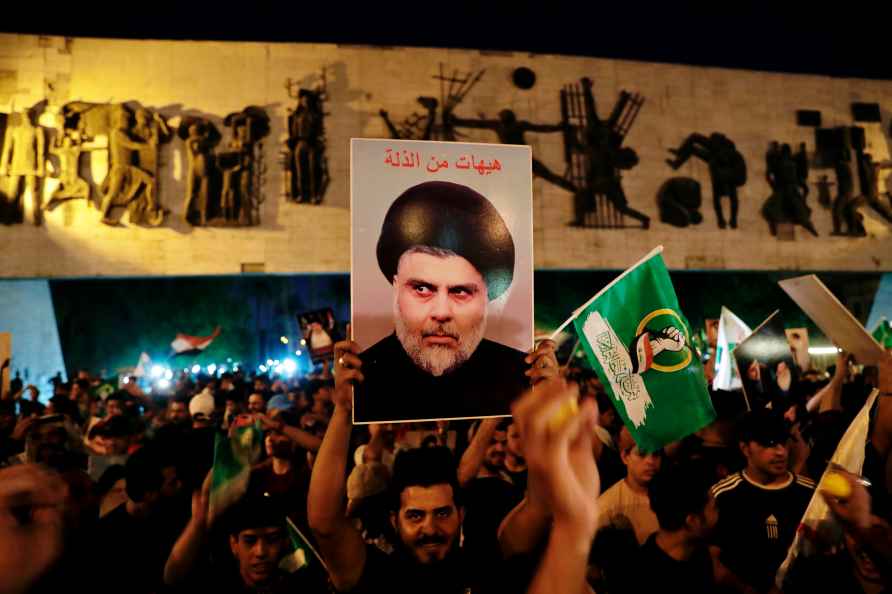 Baghdad, Nov 22 : Iraq's prominent Shiite cleric, Moqtada al-Sadr has condemned all pressures on the country's electoral commission and interference in its work. "We condemn and denounce all the political and security pressures the commission has been subjected to from the first day of its work until now," al-Sadr said on Sunday in a statement posted on his Twitter page. He praised "the integrity and accuracy of all the details of the work of the Independent High Electoral Commission (IHEC)." There must be no interference in the work of the judiciary and the Federal Court, which is supposed to ratify the elections result that some parties are struggling to change, the cleric added. According to the law, the Federal Supreme Court of Iraq must ratify the final results, Xinhua news agency reported. Earlier, the IHEC announced the full results of the country's snap parliamentary elections, showing that the Sadrist Movement, led by al-Sadr, took the lead with more than 70 seats, while the al-Fatah (Conquest) Coalition garnered 17 seats compared with 47 in the 2018 elections. Political parties unsatisfied with the results said the elections were manipulated and that they would not accept the "fabricated results." Followers of the political parties rejecting the election results took to the streets in many Iraqi cities, including the capital Baghdad. The Iraqi parliamentary elections, originally scheduled for 2022, were held in advance in response to months of protests against corruption, poor governance, and a lack of public services. A total of 3,249 candidates within 167 parties and coalitions competed for 329 parliamentary seats in the elections. /IANS

Seoul, Dec 23 : South Korea has became the 10th country outside of Europe to join the European Union (EU) law enforcement cooperation agency that fights terrorism and other international crimes, polic […]

Guj govt postpones class 9 to 12 exams by a fortnight

Gandhinagar, Dec 23 : The Gujarat government on Wednesday has postponed the prelims exam of class 9 to 12, board exams of class 10 and 12, practical exam and annual exam of class 9 and 11 to take plac […]

NHRC concerned on rights of leprosy-hit people amid Covid

New Delhi, Dec 22 : The National Human Rights Commission (NHRC) on Wednesday expressed serious concerns over the human rights issues of people affected with leprosy amid Covid-19 pandemic, and its imp […]