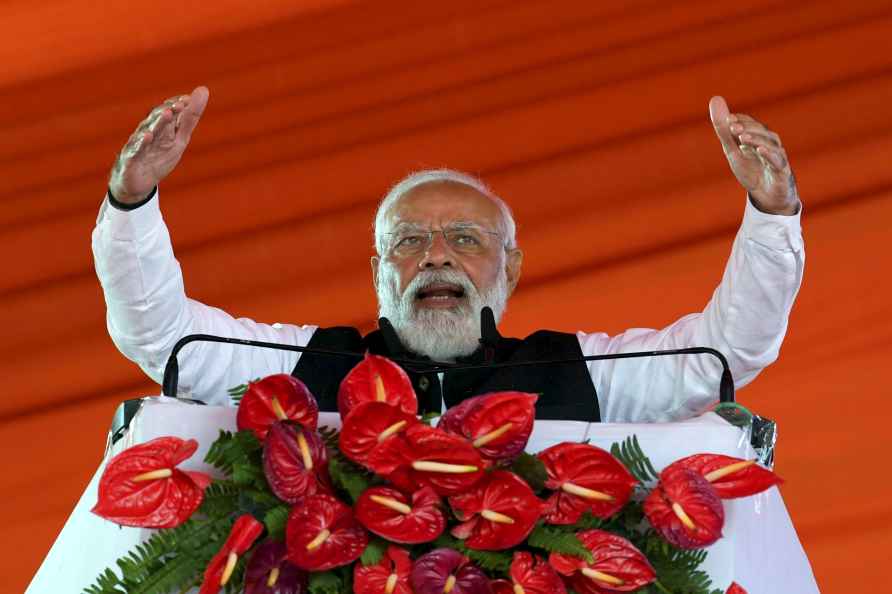 [Mahoba: Prime Minister Narendra Modi addresses at the dedication of the various developmental projects to the nation, in Mahoba, Uttar Pradesh, Friday, Nov. 19, 2021. (PIB/ /PTI] Lucknow, Nov 19 : Prime Minister Narendra Modi will lay the foundation stone of the 600 MW ultra-mega solar park and inaugurate the Arjun Sahayak irrigation project in Jhansi on Friday. The move seeks to convert the Bundelkhand region with abundant land and sunlight into a "solar power hub" in the state. The Prime Minister will also inaugurate the Arjuna Sahayak irrigation project worth Rs 2,655 crore. This is a significant initiative to alleviate water distress in the districts like Mahoba, Hamirpur and Banda and to bring relief to the farmers of the state. The megaproject on the river Dhasan will not only provide irrigation facilities to over 1.5 lakh farmers of about 168 villages of Mahoba, Banda and Hamirpur but will also facilitate the provision of clean drinking water (potable water) to over 4 lakh families residing in water-scarce regions. The Arjun Sahayak Project will play an important role in benefitting the crop growers along with other projects. The project, which started nearly a decade ago (2009-10), will not only make Bundelkhand green but its operationalisation will also help in irrigation of around 44,382 hectares of land in the districts of Mahoba, Hamirpur and Banda. Along with this, 15,104-hectare irrigation capacity will also be restored. In addition, 20 MCM Drinking Water will also be available to Mahoba from the Kabrai Dam. Nearly 1,49,755 farmers of 168 villages will be benefited According to the government spokesman, the Arjun Sahayak Project, which was started in the year 2009-10 at a cost of Rs 850 crore, was to be completed in the year 2015. However, due to the neglect of the previous governments, not only the completion of the project was delayed but also its cost was increased to Rs 2,655.36 crore. The project will benefit nearly 1,49,755 farmers of 168 villages of Mahoba, Hamirpur and Banda. The Bundelkhand region, for a long, has been facing acute water shortage where most wells and hand-pumps have dried up due to decreasing groundwater levels. The residents in the drought-prone regions have been forced to buy basic necessities such as drinking water. To realise its vision of providing water to every needy through 'Per Drop, More Crop' and 'Har Khet Ko Paani', the Yogi Adityanath government in Uttar Pradesh has worked in a planned and phased manner since it gained power in the state. The government not only began with proper and timely allocation of funds but also through regular monitoring of these projects the work has been completed in a time-bound manner. In view of solving the water crisis in such regions, the government completed the Rasin Dam Project (Chitrakoot) Bandai Dam Project (Lalitpur) between March 1, 2020, to March 31, 2021. In the coming days, projects like Kulpahar and Shahzad of Bundelkhand will serve as a model for the state. These are being connected to the sprinkler system. With this, more irrigation will be done in less water and the yield will also increase. Besides the Arjun Sahayak Project, the Prime Minister will also lay the foundation of an ultra-mega solar park of 600 MW capacity in Jhansi. The Prime Minister will lay the foundation stone of the Rs 400 crore project at Jhansi node of UP Defence Industrial Corridor. The project is being executed by Bharat Dynamics Ltd for setting up a plant to produce propulsion systems for Anti-Tank Guided Missiles. He will launch the National programme of Simulation Training for NCC cadets with the aim to scale up simulation training facilities for all the three wings of NCC. He will dedicate to the nation augmented reality powered electronic kiosks at the National War Memorial which will enable visitors to pay floral homage to martyrs through the simple click of the button. The Prime Minister will set the BJP's election agenda in Bundelkhand through two public meetings in Mahoba and Jhansi. /IANS

After Independence, many great personalities' contributions were erased: PM
[**EDS: HANDOUT PHOTO MADE AVAILABLE FROM PMO** New Delhi: Prime Minister Narendra Modi during a programme to unveil a hologram statue of Netaji Subha