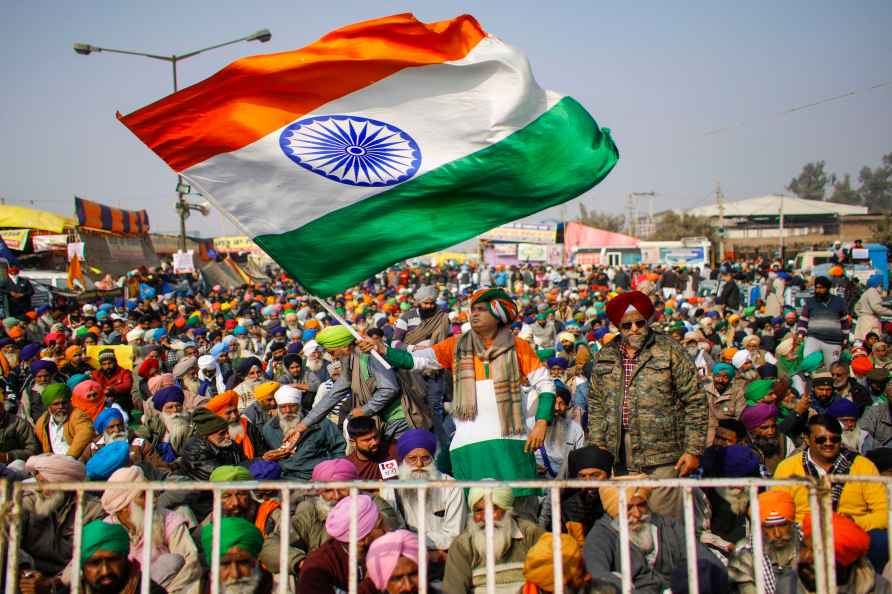 [**EDS: FILE IMAGE** New Delhi: In this Wednesday, Dec. 30, 2020 file photo a farmer waves the Tricolor during a protest against the new farm laws, at Singhu Border in New Delhi. Prime Minister Narendra Modi, in an address to the nation Froday, Nov 19, 2021, announced that the three contentious farm laws will be repealed. ( /PTI] New Delhi, Nov 19 : The BJP believes that Prime Minister Narendra Modi's announcement to repeal three farm laws will help the party in the forthcoming Assembly polls. The BJP is also eyeing political dividend in 40 Lok Sabha seats spread in Western UP, Haryana and Rajasthan in the next general election in 2024. The saffron camp also feels that the decision will help the party to form an alliance with the newly launched party of former Chief Minister Amarinder Singh in Punjab. In his address to the nation, Prime Minister Narendra Modi said, "It seems some of the farmers are still not convinced by our sincere efforts. We have decided to repeal the three farm laws. The constitutional process to repeal these laws would be completed during the Parliament Session that would start at the end of this month." Since November last year, farmers from different states particularly from Punjab, Haryana and western UP have been staging protests at the borders of the national capital demanding repeal of the new farm laws and legal guarantee for MSP on their produce. Rakesh Tikait has been leading the farmers protest at Ghazipur border which is one epicentre of the ongoing agitation along with Tikri and Singhu border where leaders from the farmer unions in Punjab have been blocking the highways for nearly one year. A senior party leader said that the decision will not only end the agitation but help the party to reach out to the farmers with a message that the government is concerned about them. "Amid a few demands, one demand to repeal the new laws has been finally accepted and now we hope farmers will end their agitation and return back to their villages. Prime Minister Modi's message is very loud and clear that the government is ready to soften its stand for the interest of farmers, farmer's welfare is the priority of this government," he said. The saffron party leaders feel that now its leaders in Punjab will not face violent protest and attack while participating in political activities. The BJP, which is hoping to revive its fortune in Punjab, is fighting the election with former Chief Minister Amarinder Singh. Currently, the BJP is all set to contest the Punjab polls after its one of the oldest ally Shiromani Akali Dal (SAD) broke alliance over three farm laws. A senior party functionary said that repeal of three farm laws have paved the way for alliance with Amarinder Singh's party. Earlier, Singh had said, "Hopeful of a seat arrangement with the BJP in 2022 Punjab Assembly polls if farmers protest is resolved in farmers' interest." The party also feels that the decision to repeal the laws will also bring back Jats, who actively participated in farmers agitation, to the BJP. "We know that the fate of all the Lok Sabha seats of Haryana, Rajasthan and Western Uttar Pradesh is decided by the Jat community, which is crucial for formation of the government at the Centre. Hope this decision helps us to win back the support of the Jat community once again in these 40 Lok Sabha seats," a senior party leader said. /IANS

Kohima, Oct 2 : The influential Naga Students' Federation (NSF) on Sunday strongly condemned the extension of the Armed Forces (Special Powers) Act, 1958 for another 6 months and has urged the people […]

U-17 Asian Cup 2023 Qualifiers: India take on Maldives in their tournament opener

Al Khobar (Saudi Arabia), Oct 2 : A confident India U-17 men's national football team will take on the Maldives in their first match of the AFC U-17 Asian Cup 2023 Qualifiers Group D at the Prince Sau […]