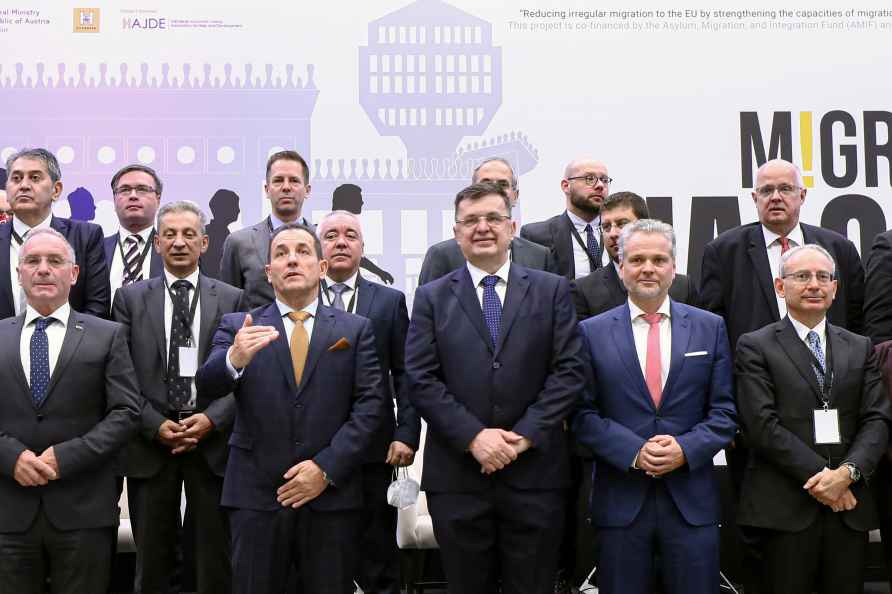 [Sarajevo : Bosnian Defense Minister Selmo Cikotic, center left, gestures next to the Chairman of the Council of Ministers of Bosnia Zoran Tegeltija, center, and Johann Sattler the EU Ambassador to Bosnia and Herzegovina while posing for a group photo at a conference on migration in Sarajevo, Bosnia, Thursday, Nov. 18, 2021. The European Union officials commented on the situation on the Polish border with Belarus during a gathering in Sarajevo of the EU and West Balkans security officials to discuss migration management in the region. /PTI] New Delhi, Nov 18 : The Congress on Thursday once again attacked the government over border row with China and alleged that China has established three villages near Doklam and the Modi Government has done unpardonable, blatant and brazen compromise of 'National Security' as India's 'Territorial Integrity' stands exposed once again and questioned Prime Minister's silence on the issue. Addressing a press conference Congress spokesperson Gaurav Vallabh said, "Prime Minister and Defence Minister have undermined the astounding valour and insurmountable grit of our Armed Forces, who faced Chinese incursions and aggressions with indomitable courage and sacrifice." "We urge the Prime Minister not to hide behind smokescreen and answer to the people," he added. Vallabh said the new satellite images on Chinese military development, show purported construction of Chinese villages in Bhutanese territory over the last year, multiple new villages are seen spreading through an area roughly 100 square km (25,000 acres). The villages were constructed between May 2020 and November 2021. These new villages lie near the Doklam plateau where India and China had a face-off in 2017, after which China bypassed Indian defences to resume road construction activity in the region. The Congress said new construction on Bhutanese soil is particularly worrying for India since India has historically advised Bhutan on its external relations policy and continues to train its armed forces. "In the last 18 months, the Modi government committed unpardonable compromise with our national security vis-a-vis our dominant position in Kailash Ranges and by withdrawing from Finger 4 to Finger 3 on the Northern Bank of Pangong Tso Lake Area," he said. Vallabh further said, "Why had China occupied India's territory inside the LAC up to Y-Junction in Depsang Plains? Why had China occupied India's territory inside the LAC up to Y-Junction in Gogra & Hot Springs? How come China entered into our territory, Arunachal Pradesh and constructed a village, a dual use village. Not just a residential village, it is also a military cantonment." He alleged that when the GOC in Chief of the Eastern Army Command has said that China is getting active and building infrastructure, roads and highways in the Chumbi valley. Chumbi valley directly affects and threatens the Siliguri corridor, the chicken's neck, which connects our 7 northeastern states with the rest of India that is the strategic importance of the Siliguri corridor. The Congress said 100 square km of land grab and illegal incursion and setting 4 new villages by China in Bhutan, next to Doklam is a blow to our national security. /IANS