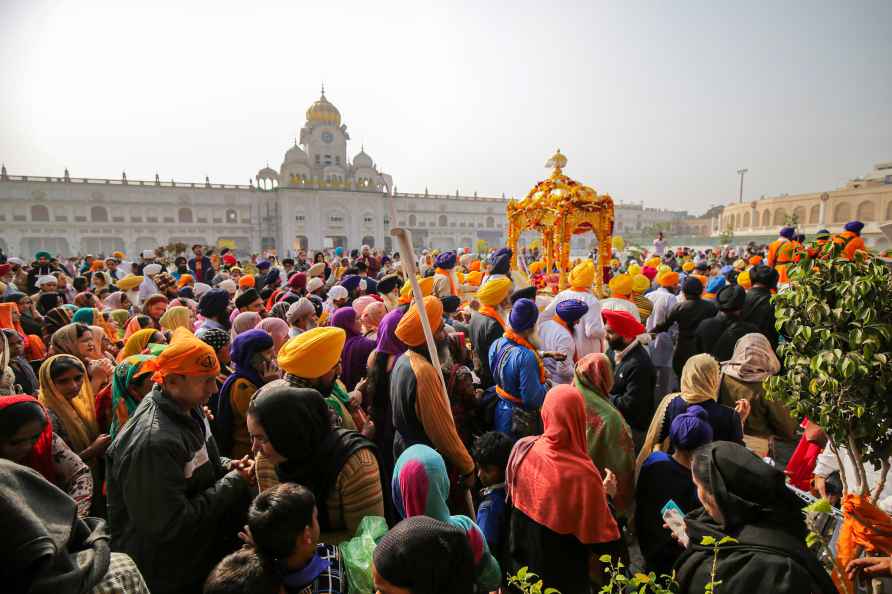 [Amritsar: Sikh devotees carry the Sri Guru Granth Sahib during a religious procession at the Golden Temple on the eve of 552nd birth anniversary of Guru Nanak Dev Ji, in Amritsar, Nov. 18, 2021. ( /PTI] New Delhi, Nov 18 : Two members of the Sikh community are being evacuated from war-torn Afghanistan, officials of India World Forum said on Thursday. Satveer Singh, an Indian citizen serving as Head Granthi at Gurdwara Karte Parwan, Kabul, for the past twenty one years and Sorjit Singh, Afghan Citizen hailing from Khost Province and caretaker of Gurdwara situated there, were evacuated on Thursday. The Indian government in coordination with India World forum has made this evacuation process possible. India World Forum in a statement said, "On the eve of 552nd Birth Anniversary of Sri Guru Nanak Dev, Indian World Forum in coordination with the Government of India and assistance from Sobti Foundation has evacuated two persons from Afghanistan earlier today". Both the evacuees - Indian Citizen Satvir Singh and Afghan citizen Sorjit Singh will land at New Delhi airport through private airline on Friday. Both of them are having a night stay in Tehran. However, a total of 218 Afghan Citizens belonging to Hindu & Sikh Communities await issuance of e-visas from the Government of India as of date, said Puneet Singh Chandhok, Indian World Forum President. India's mission to evacuate its citizens from Kabul started after the Taliban took over the power in Afghanistan and seized the capital city. The evacuation mission has been named as "Operation Devi Shakti". India began the complex evacuation mission by airlifting 40 Indians from Kabul to Delhi on August 16. So far, India has evacuated over 800 people from Afghanistan. The external affairs ministry had introduced a new category of "e-Emergency X-Misc Visa" of electronic/e-visa in August to fast track applications of Afghan citizens wanting to enter India. India World Forum has thanked the Ministry of External Affairs and other agencies involved in the evacuation process. /IANS

Nadal one win away from record 21st Grand Slam
[Melbourne: Daniil Medvedev of Russia celebrates after defeating Stefanos Tsitsipas of Greece in their semifinal match at the Australian Open tennis c

Lima, Jan 27 : Peru reported a new and "relatively small" oil spill off the coast of Callao province, which was already affected by some 6,000 barrels of oil accidentally spilled at the La Pampilla re […]

Nadal one win away from record 21st Grand Slam