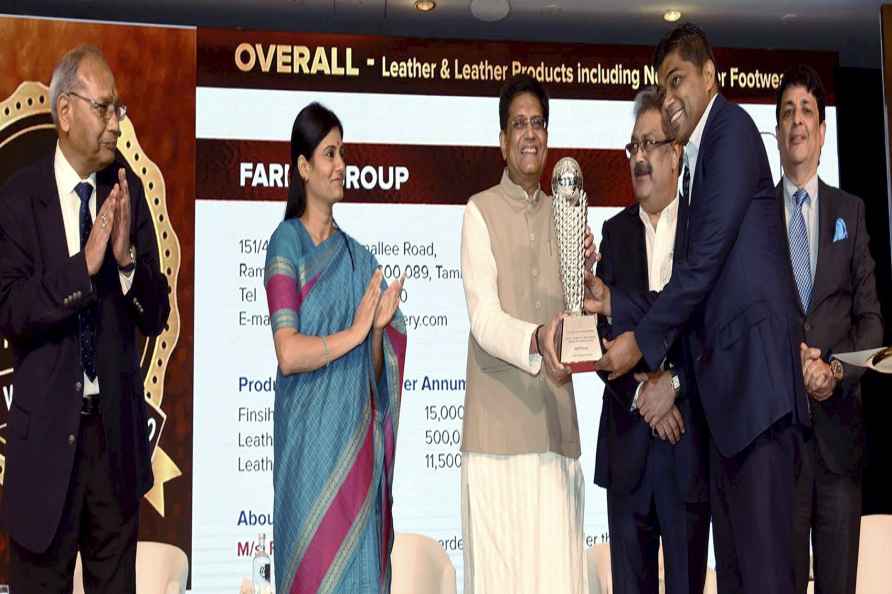 [**EDS: IMAGE MADE AVAILABLE FROM PIB** New Delhi: Union Minister for Commerce & Industry Piyush Goyal presents the CLE National Export Excellence Awards for the years 2019-20 and 2020-21, in New Delhi, Wednesday, November 17, 2021. Minister of State for Commerce & Industry Anupriya Patel and other dignitaries are also seen. ( /PTI] New Delhi, Nov 17 : Sports minister Anurag Thakur on Wednesday conferred the first ever SAI Institutional Awards to a total of 162 athletes and 84 coaches for their excellent performances in national and international tournaments. Cash awards amounting to Rs 85.02 lakh were conferred on the awardees during the ceremony, which was attended by Sports minister Thakur and Minister of State for Youth Affairs and Sports Nisith Pramanik and other officials at the Jawaharlal Nehru Stadium here. Praising the award winners, Thakur said, "I heartily congratulate all athletes and coaches who have been awarded today. Sports is very close to the heart of our PM Narendra Modi ji and taking his vision forward, a host of facilities are being extended to athletes. Every athlete is an inspiration for his generation." The minister also highlighted the importance of sports being an integral part of the National Education Policy. "When the sporting achievements of a student are announced in his or her school, it inspires other students to look beyond just academics and include sports in their life. That is the power of an athlete. I am also glad that sport has become an integral part of the National Education Policy and therefore is a part of every student's life now," he added. The categories of awards included Outstanding Award (for National level achievements) and Best Award (for International level achievements). The awards acknowledged the exceptional performance of the SAI athletes and coaches under the various sports promotion schemes at the national and international level from 2016. The awards thus have been granted to the deserving candidates for the years of 2016-17, 2017-18, 2018-19 and 2019-20. The selection committee comprised senior SAI officials as well as eminent sports persons, who streamlined the nominations received from the Regional Directors of the various SAI National Centres of Excellence. The awardees have also been given a special tailor-made blazer along with a citation. /IANS

Seoul, Jan 25 : South Korea's economy is estimated to have grown 4 per cent in 2021, marking the highest growth rate in 11 years, central bank data showed on Tuesday. The growth was higher than […]

Shimla: A train runs on the Kalka-Shimla heritage rail track after resumption of services, in Shimla, Tuesday, Jan 25, 2022. The train service was suspended, due to collapse of a wall on the track at […]

Security for Republic Day in Kolkata