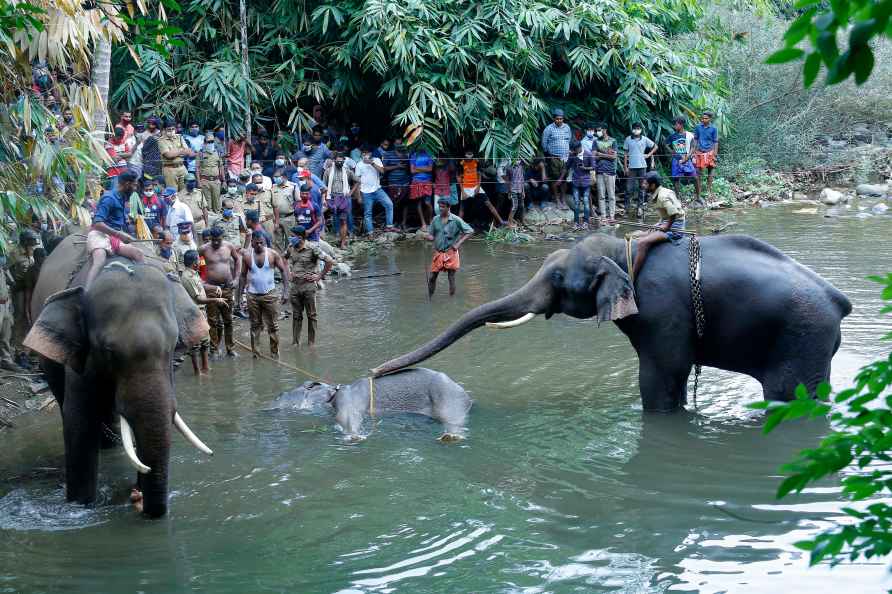 Thiruvananthapuram, Nov 16 : A three-year-old male tusker on Tuesday morning was found dead in the forests at Malampuzha near Palakkad district. The authorities suspected that the elephant came in contact with an electric wire and was electrocuted. The Forest and WildLife officials, police and the locals reached the spot. When the people arrived at the scene of the accident, three other wild elephants were guarding the one that got electrocuted and were seen pushing it and giving signals to get up. Meanwhile, the authorities are now trying to see that the three wild elephants are moved into the forests so that the autopsy procedures of the dead elephant could be undertaken. The arrangements to bury it are also going on, said officials. /IANS

Skinniest elephant rescued in MP will be shifted to UP rehabilitation centre
Bhopal, Dec 24 : India's skinniest female elephant, Laxmi, that was rescued in an emaciated condition from Madhya Pradesh's Chhatarpur district, will

MP lost 85 tigers in past four years: Govt
Bhopal, Dec 23 : As many as 85 tigers, including 32 cubs, have died in the past four years due to various reasons in wildlife habitats of Madhya Prad

By Quaid Najmi Mumbai, Dec 25 : Turning 60 today (December 25), Mumbai's busy-bee Mayor Kishori Pednekar did not celebrate her birthday alone - but saw to it that around 100 unfortunate "sightless" […]

Jalandhar: Former cricketer Harbhajan Singh pays respects to the pitch at the Burlton Park stadium, from where he started his career, in Jalandhar, Saturday, Dec. 25, 2021. Singh announced his retirem […]