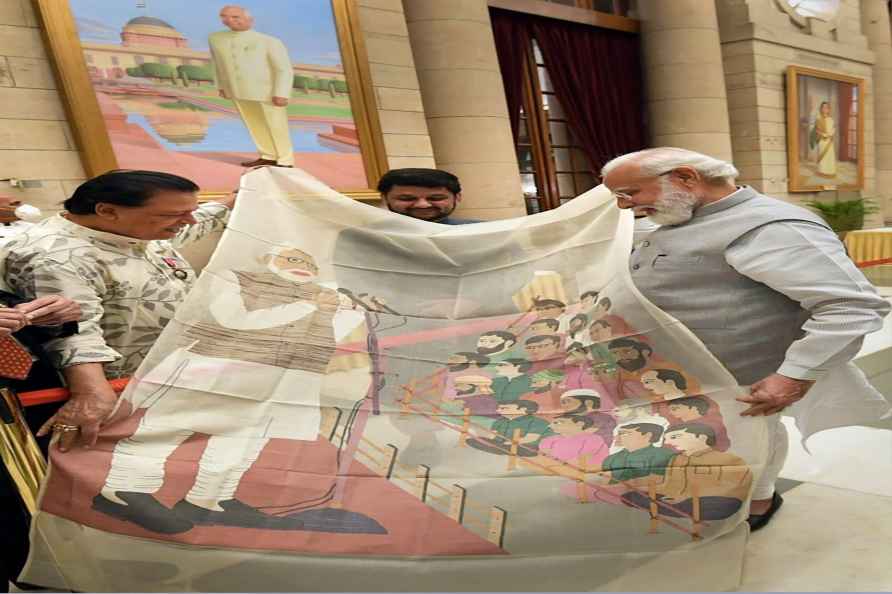 [**EDS TWITTER IMAGE POSTED BY @narendramodi ON SATURDAY, NOV. 13, 2021** New Delhi: Prime Minister Narendra Modi being presented with a saree by Padma Shri awardee Biren Kumar Basak belongs to Nadia (West Bengal), in New Delhi. He is a reputed weaver, who depicts different aspects of Indian history and culture in his Sarees. During the interaction with the Padma Awardees, he presented something to me which I greatly cherish. ( /PTI] New Delhi, Nov 13 : Maulana Saud Alam Qasmi, Dean of the Theology Department at the Aligarh Muslim University, said that there was a need to take an initiative to impart education of other religions and faiths in madrasas, AwazTheVoice reported. It is very important for fostering mutual tolerance and love, he added. "The weakening of our traditions is one of the reasons for the threat to communal unity and harmony. We have to preserve the Ganga-Jamuni civilization," Qasmi said at a function organised by the Khusro Foundation in Delhi. He also released a book of Zafar Darak Qasmi 'India's Legal Status' on the occasion. The book is published by Khusro Foundation. Maulana Qasmi said that the need of the hour was to remove the shortcomings and weaknesses of society in time so that it does not become a disease. He said singing patriotic songs is a great virtue in today's world; we have to realize that hate doesn't last; love lasts. He further said that in the history of Arabia to Persia, songs of the greatness and uniqueness of the Indian subcontinent have been sung. India has been beautifully mentioned in everything from religion to literature, the report said. He spoke about an earlier interaction with the students of Islamabad University when he told them that it was wrong to call India 'Darul Harb'. (A nation that is an enemy of Islam). "We are not enemies. Everything has changed in the world; there is a new system under which the world is linked through the UN. We need to move in a new direction to live in a new environment and new conditions," he told the gathering in Islamabad, the report added. He said his speech was liked by a large section in Pakistan and they supported his ideology, the report said. /IANS