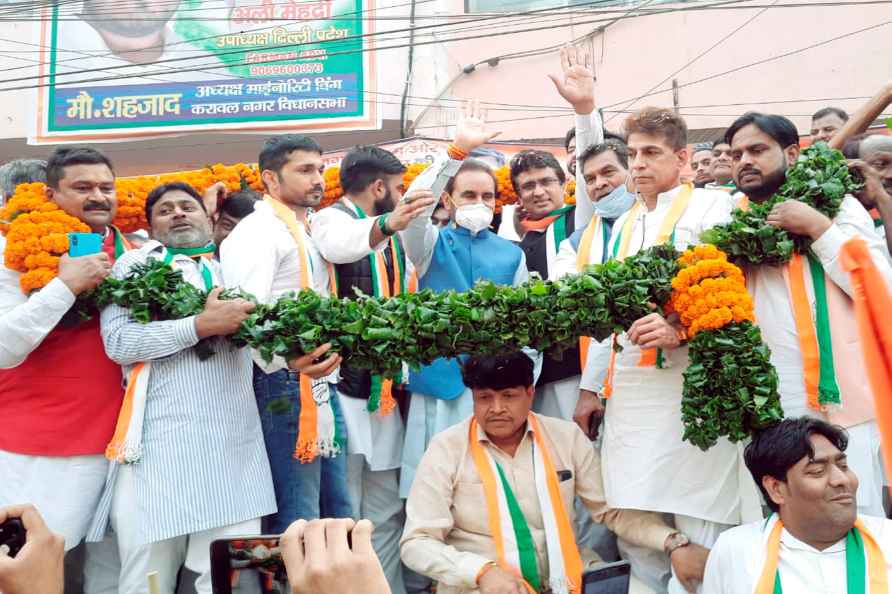 [New Delhi: Congress workers participate in the second phase of the ?Pol Khol Yatra? under the Jan Jagran Abhiyan, under the leadership of Delhi Pradesh Congress Committee president Ch. Anil Kumar, at the Chand Bagh Pulia, in New Delhi, Thursday, Nov. 11, 2021. ( /PTI] New Delhi, Nov 11 : After Rajasthan Chief Minister Ashok Gehlot met Congress Interim President Sonia Gandhi on Thursday it became clear that the state will witness a cabinet reshuffle, accommodating the supporters of former Deputy CM Sachin Pilot. The Rajasthan rift is likely to take a back seat for the time being but the issue of Chief Ministership will remain. Pilot supporters will be pushing for a leadership change as the former Deputy Chief Minister doesn't want to settle for less than that as the Pilot camp thinks that he has been denied such a post despite being the natural claimant. Sachin Pilot has also declined the party's offer to move him out of the state at the AICC level. Sources close to him say that he does not want to move out of the state and fall in the trap of Ashok Gehlot who wants his adversaries to move out of the state with assignments at the Central level. Sachin Pilot, who is pushing his case, has been meeting party leaders and on Wednesday met KC Venugopal ahead if the Gehlot--Priyanka Gandhi meeting. The Gandhi sibling wants the issue to be resolved immediately as she was instrumental in brokering peace when Pilot had revolted against Ashok Gehlot last year. After the meeting with Sonia Gandhi, Ashok Gehlot has maintained that he will abide by the decision taken by the leadership and has conveyed everything to her. Meanwhile, Congress sources confirmed that state Health Minister Raghu Sharma and Revenue Minister Harish Choudhary might be relieved from cabinet portfolios as they have been made party in-charges of Gujarat and Punjab. Long pending appointments, especially related to the state unit, will be announced following the cabinet expansion. "After the expansion, the announcement of the appointments would also start," a Congress leader said. Gehlot had met Congress leader Priyanka Gandhi, General Secretaries Ajay Maken and K.C. Venugopal at former party president Rahul Gandhi's residence on Wednesday amid talk of a rejig in the cabinet. Gehlot is buoyed with the bypoll results and his camp is enthusiastic about the win in Dhariawad, which was a BJP seat since 2013 and was captured by the Congress and Vallabhnagar, which was retained by the ruling Congress. The BJP finished third in Dhariawad and fourth in Vallabhnagar. /IANS

Australian Open: Nadal begins quest for 21st Grand Slam with easy opening-round win
[Belgrade: Fans with Serbian flag and journalist wait for arrival of Novak Djokovic in front of the VIP terminal at the Nikola Tesla airport in Belgr