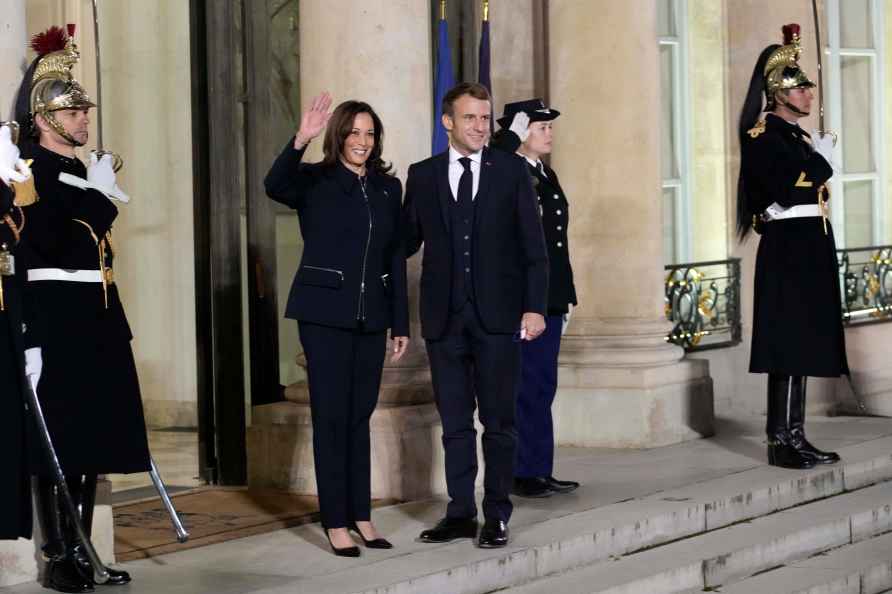 [Paris : French President Emmanuel Macron, right, welcomes Vice President Kamala Harris at the Elysee Palace, Wednesday, Nov. 10, 2021 in Paris. Kamala Harris will try to smooth French feathers after a diplomatic crisis. The U.S.-France relationship hit a historic low this year after a U.S.-British submarine deal with Australia scuttled a French contract to sell subs to the Australian navy. /PTI] Paris, Nov 10 : French President Emmanuel Macron has announced to postpone the pre-decided easing of anti-Covid-19 measures, since France is undergoing the fifth wave of the pandemic. "We are not done with the pandemic yet," he warned in his address to the nation on Tuesday, Xinhua news agency reported. Macron said that all barrier gestures that protect people both from Covid-19 and other contagious winter diseases should be given more attention. "We all relaxed a bit our efforts and it was normal. But we should step up again," he said. He added that the controls of health pass will be also strengthened in concerned establishments, including airports, ports and train stations. Furthermore, people over 65 years old and the most vulnerable ones will have to get a booster dose in order to validate their health pass from December 15. The French head of state reaffirmed the role of health pass in France's anti-Covid-19 combat. "Thanks to the health pass and the strategy implemented since last July, we have managed to control the epidemic," he stated. Since the beginning of the Covid-19 vaccination campaign in December 2020, France has injected more than 100 million doses in ten months, and 51 million French are now fully immunized, he said. Macron urged people to get a booster shot six months after the vaccine. "The solution to this weakened immunity is the injection of an additional dose of vaccine, the booster shot," he said. As already done for the 65 years old and above, a booster shot campaign will be launched at the beginning of December for people aged between 50 and 64. The French president also called on the 6 million non-vaccinated to get vaccinated in order to get protected and to "be able to live normally". "We have done what is necessary to protect ourselves, we can continue to get the situation under control if each of us does our part," he said. /IANS

GOI agrees to procure Moong on MSP in Punjab

New Delhi, May 20 : Civil aviation regulator, the Directorate General of Civil Aviation (DGCA) on Friday granted the air operator certificate (AOC) to Jet Airways, bringing the grounded airline yet an […]

DW BUREAU To recognize the excellence in efforts towards environment conservation, the Environment and Climate Change Department of Government, Haryana has invited nominations for Darshan Lal Jain […]