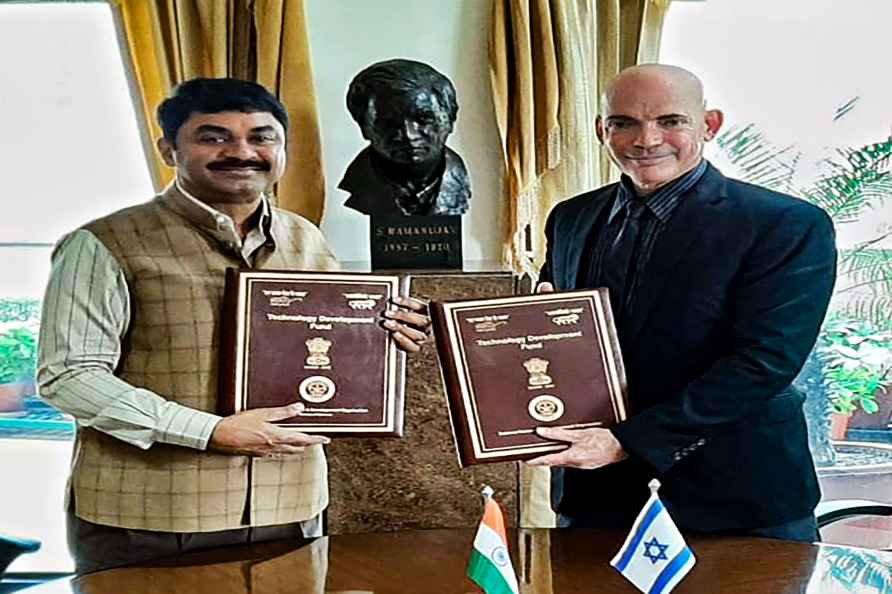 [**EDS: IMAGE MADE AVAILABLE FROM PIB** New Delhi: Secretary, Department of Defence R&D and Chairman, DRDO, G. Satheesh Reddy and the Head of DDR&D, Israel, BG (Retd.) Daniel Gold sign the Bilateral Innovation Agreement for development of dual use technologies, in New Delhi, Tuesday, November 9, 2021. ( /PTI] New Delhi, Nov 9 : India and Israel signed an agreement on Tuesday for development of dual use technologies in the defence sector. India's Defence Research and Development Organisation (DRDO) and Israel's Directorate of Defence Research and Development (DDR&D), have entered into the agreement to promote innovation and accelerated research and development in start-ups and MSMEs of both countries for the advancement of dual use technologies, a statement said. The agreement was signed between DRDO Chairman, G Satheesh Reddy and DDR&D head, Brig Gen Dr Daniel Gold (retd). The Indian Defence Ministry said that it is a tangible demonstration of the growing Indo-Israeli technological cooperation. Under the agreement, start-ups and industry of both countries will work together to bring out next generation technologies and products in the areas such as drones, robotics, artificial intelligence, quantum technology, photonics, biosensing, brain-machine interface, energy storage, wearable devices, natural language processing and others, it said in the statement. Products and technologies will be customised to meet unique requirements of both the countries. The development efforts will be jointly funded by the DRDO and the DDR&D, it added. The technologies developed under bilateral innovation agreement will be available to both countries for their domestic applications and the development efforts will be jointly funded by the DRDO and the DDR&D, the ministry said. To enhance bilateral defence cooperation between both the countries, formulation of a task force was announced last month, during the 15th joint working group meeting in Tel Aviv. The meeting was co-chaired by Indian Defence Secretary Ajay Kumar and the Director General of Israel's Defence Ministry, Maj Gen Amir Eshel (retd). The joint working group is the apex body of both countries' Defence Ministries to comprehensively review and guide all aspects of cooperation in this sector. The two sides had reviewed the progress made in military engagements including exercises and industry cooperation. /IANS

Amit Shah meets Jat leaders ahead of UP polls
[New Delhi: Union Home Minister Amit Shah with a senior Jat leader during his meeting with Jat leaders from UP, at BJP MP Parvesh Verma's residence in

Terrorism and its ecosystem will be eradicated in J&K: Guv Manoj Sinha
[Jammu: Jammu and Kashmir Lieutenant Governor Manoj Sinha inspects the parade during the 73rd Republic Day celebration at Maulana Azad Stadium in Jam