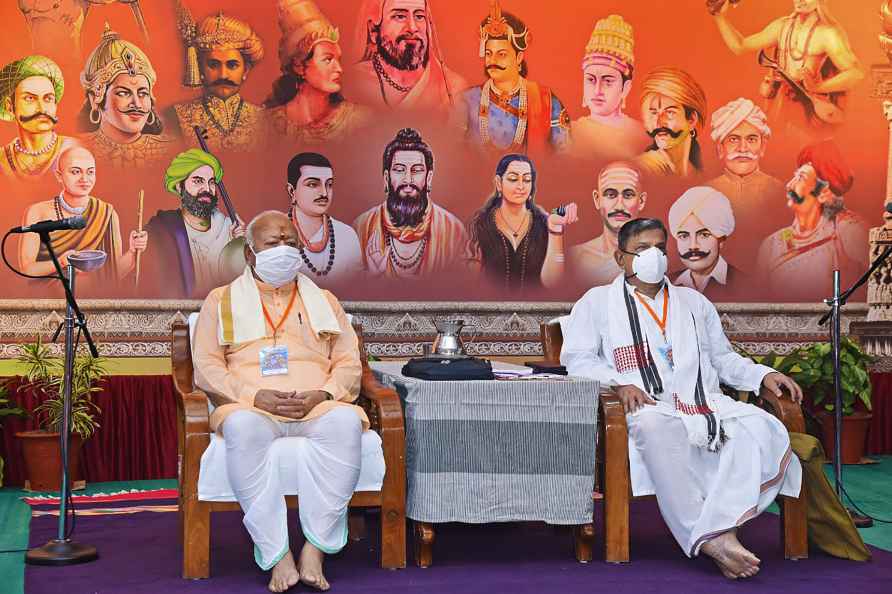 [Hubballi: Rashtriya Swayamsevak Sangh (RSS) Chief Mohan Bhagwat and General Secretary of the RSS Dattatreya Hosabale during the 'Akhil Bharatiya Karyakari Mandal' meeting in Hubballi, Thursday, Oct. 28, 2021. ( /PTI] Dharwad (Karnataka), Oct 28 : Three-day Rashtriya Swayamsevak Sangh's (RSS) Akhil Bharatiya Karyakari Mandal Bhaitak (national executive committee meeting) began on Thursday at the Rashtrotthana Vidya Kendra in Madhavnagar of Dharwad district. The meeting is being attended by 350 chiefs (pranth pramukhs) of various regions. At the meeting, discussions on the situation of minority Hindus in Bangladesh will be of top priority. The pramukhs will talk about formulating a policy to protect the persecuted Hindus. They will also discuss future plans. Sangh's Prachar Pramukh Sunil Ambekar had earlier said: "The baithak will discuss centenary celebrations of RSS as it was founded in 1925. At the meeting discussions on what can be done in three years and on unfinished goals of RSS, expansion and training of swayamsevaks (volunteers), will also be held. The meet will be chaired by RSS Sarsanghchalak (chief) Mohan Bhagwath. No BJP leader neither from state nor from Centre will participate in the meet. Security has been beefed up in the premises as Mohan Bhagwat is Z-category security protectee. The meeting is being held for the second time in the same premises. /IANS

Mystery of J.C. Bose's vault remains unsolved for over eight decades
[Bhopal: Children born with congenital disabilities, believed to have been caused by the exposure of their parents to gas leakage in the 1984 Bhopal g

Los Angeles, Nov 30 : Hollywood star Bradley Cooper was en route to collect his four-year-old daughter Lea when he was held up at knifepoint and the actor says the situation was "pretty insane". […]

Blood groups A, B and Rh+ are more prone to Covid: Study

New Delhi, Nov 30 : People with blood groups A, B and Rh+ are more susceptible to Covid-19 infection whereas O, AB and Rh- are at lower risk of infection, according to a study released on Tuesday by S […]

No case of Omicron variant detected in India so far: Mandaviya

New Delhi, Nov 30 : No case of Omicron variant has been detected in the country so far, Union Health Minister Mansukh Mandaviya told the Rajya Sabha on Tuesday. He was responding to a question d […]

New York, Nov 30 : Maggie Gyllenhaal's directorial debut 'The Lost Daughter' dominated the 2021 Gotham Awards and the popular Netflix survival drama was named as one of the Breakthrough series in the […]