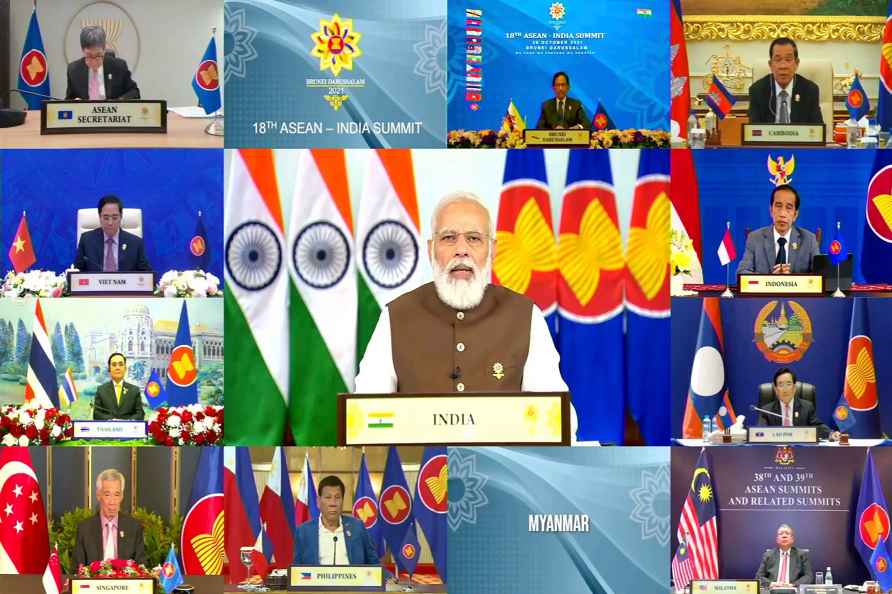 [Bandar Seri Begawan: In this image released by Brunei ASEAN Summit, Indian Prime Minister Narendra Modi speaks during the ASEAN-India Summit on the sidelines of the Association of Southeast Asian Nations (ASEAN) summit with the leaders, Thursday, Oct. 28, 2021. Southeast Asian leaders began their annual summit without Myanmar on Tuesday, Oct. 26, 2021, amid a diplomatic standoff over the exclusion of the leader of the military-ruled nation from the group's meetings. An empty box of Myanmar is seen at bottom second from right. /PTI] Seoul, Oct 28 : South Korean President Moon Jae-in left for Italy on Thursday for a meeting with Pope Francis and a G20 summit with other global leaders expected to focus on tackling the climate crisis and helping the world end the Covid-19 pandemic. The meeting with the Pope, set for Friday at the Vatican, is expected to focus on efforts to promote peace on the Korean Peninsula and resolve pending global issues, such as the pandemic, poverty and climate change, presidential officials said. A possible papal visit to North Korea is expected to come up during the meeting as the pope has previously expressed a willingness to visit the North as part of efforts to promote peace on the divided peninsula, Yonhap News Agency reported citing the officials as saying. On Saturday and Sunday, Moon plans to attend the G20 summit to discuss with other world leaders ways to tackle the climate crisis and the Covid-19 pandemic, as well as how to foster the global economic recovery. The pandemic and the climate crisis are expected to dominate the G20 summit, as Covid-19 is still undermining a fragile global economic recovery. After Italy, Moon will visit Glasgow, Scotland, to attend the COP26, a UN climate summit, on November 1 and 2. Reducing greenhouse gas emissions will be high on the agenda at the UN climate talks, where Moon will deliver a keynote speech. Earlier this month, Moon finalised a decision for South Korea to reduce its greenhouse gas emissions by 40 per cent from the 2018 levels by 2030, sharply raising its previous goal as part of efforts to curb the pace of climate change. Moon also confirmed South Korea will achieve carbon neutrality by 2050, as the nation started tackling the challenge of responding to climate change and attaining sustainable growth simultaneously. South Korea's decision to reduce emissions will be reported to the COP26 talks, officials said. On the last leg of the trip, Moon will make a state visit to Hungary on Tuesday. Hungary erected a monument in memory of the 25 South Koreans killed in the 2019 deadly boat sinking in Budapest. The memorial stone was set up near the accident site in the Danube River, where the Korean tourists aboard a sightseeing boat went missing after the vessel collided with a bigger cruise ship. On November 2, Moon will visit the site and pay tribute to the victims, the presidential office said. Moon will hold bilateral meetings with Hungarian President Janos Ader and Prime Minister Viktor Orban on November 3. In Budapest on November 4, Moon will hold a summit with the Prime Ministers of the Czech Republic, Hungary, Poland and Slovakia in the second summit between South Korea and the so-called Visegrad Group. The Visegrad Group is the second-largest market in Europe, and the visit is expected to help South Korean firms make inroads into the European market in the fields of electric cars and batteries. /IANS

San Francisco, Sep 23 : After being hammered by whistleblower allegations, Twitter is now seeking if there is a connection between its former head of security, Peiter 'Mudge' Zatko and Tesla CEO Elon […]

Zhang Shuai of China returns a shot against Liudmila Samsonova of...

Zhang Shuai of China returns a shot against Liudmila Samsonova of Russia during a singles semifinal match in the Pan Pacific Open tennis championships at Ariake Colosseum Saturday, Sept. 24, 2022, in […]

**EDS: TO GO WITH STORY** Bhadohi: Weavers prepare carpets at a workshop, ahead of International Carpet Fair scheduled to be held in mid-October, in Bhadohi. The city is famous for its exquisite carpe […]