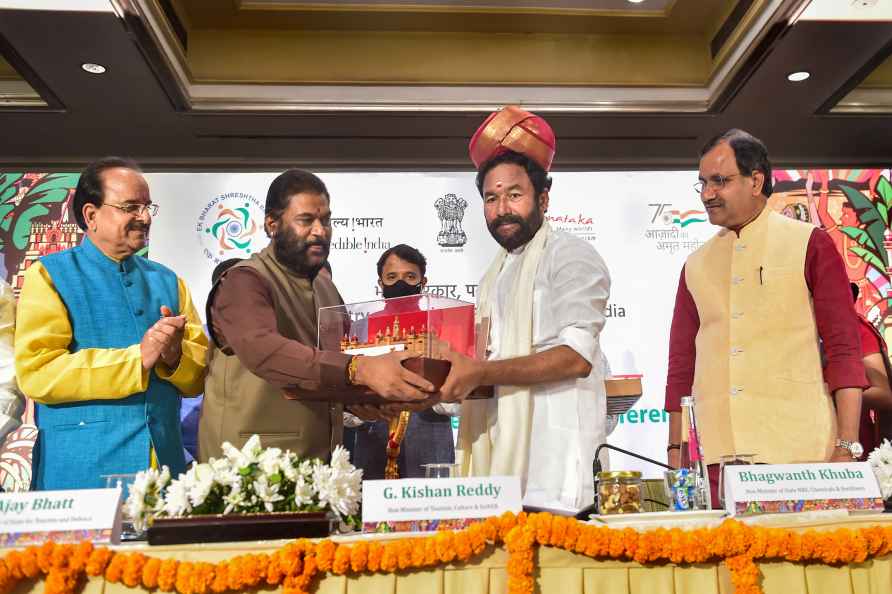 [Bengaluru: Union Minister for Tourism, Culture & DoNER G Kisan Reddy being presented a memento by Karnataka Tourism Minister Anand Singh as Union Minister of State for Tourism Ajay Bhatt and Union Minister of State for New & Renewable Energy Bhagwant Khuba look on, during the inauguration of Tourism and Culture Ministers' conference of southern region, in Bengaluru, Thursday, Oct. 28, 2021. ( /PTI] New Delhi/Bengaluru, Oct 28 : Terming as "false and baseless," Union Minister of State for Chemicals and Fertilisers, Bhagwanth Khuba on Thursday dispelled the rumours about the shortage in the country. Requesting the farmers not to believe the rumours of fertiliser shortage, Khuba told media persons at Bengaluru, "There are rumours in certain quarters that there is going to be a fertiliser shortage in the country and farmers should collect enough fertiliser for the next four months. Such allegations are false and completely baseless." "As the Minister in-charge of the Department of Fertilisers, I assure farmers that they will be made available, the amount of fertiliser they require," he added. Stating that complex fertiliser use has been increasing in Maharashtra, Madhya Pradesh, and parts of Karnataka in the past two years, the Minister added, farmers of Karnataka will benefit if they adopt complex fertilisers that give better results than DAP. "This is why the government is recommending the purchase of complex manure instead of DAP," a release from the Ministry of Chemicals and Fertilisers said in New Delhi. Production of nano urea has increased this year; production of nano DAP (Di-ammonium Phosphate) will start from next year and 22 lakh metric tonnes of urea is available in Karnataka. "Rabi season needs 2 lakh metric tonnes of DAP, which will be produced (as we have taken action) in two factories." The Union Minister added that the south-west monsoon season has seen good rainfall throughout the state of Karnataka and 78.51 lakh hectares of land was sown. "The supply of input material needed for sowing has been adequately addressed by the state. Arrangements have been made to supply fertilisers to the districts as a share of the Central government," he stated. /IANS

By Vishal Gulati Kullu, Nov 28 : While the presence of the highly endangered, elusive pheasant western tragopan can now be felt more notably in the Great Himalayan National Park, a Unesco World Her […]

DMK, BJP in war of words after Nadda dubs former a 'dynasty' party

By Arun Lakshman Chennai, Nov 28 : The BJP and the DMK have got into a spat after the national president of the saffron party, J.P. Nadda termed the DMK a 'Dynasty party. The DMK retorted with the […]

Jaipur, Nov 28 : After gaining global recognition with the Jaipur Foot which helped physically disabled people realise their dream to stand on their feet, the Pink City is garnering worldwide acclaim […]