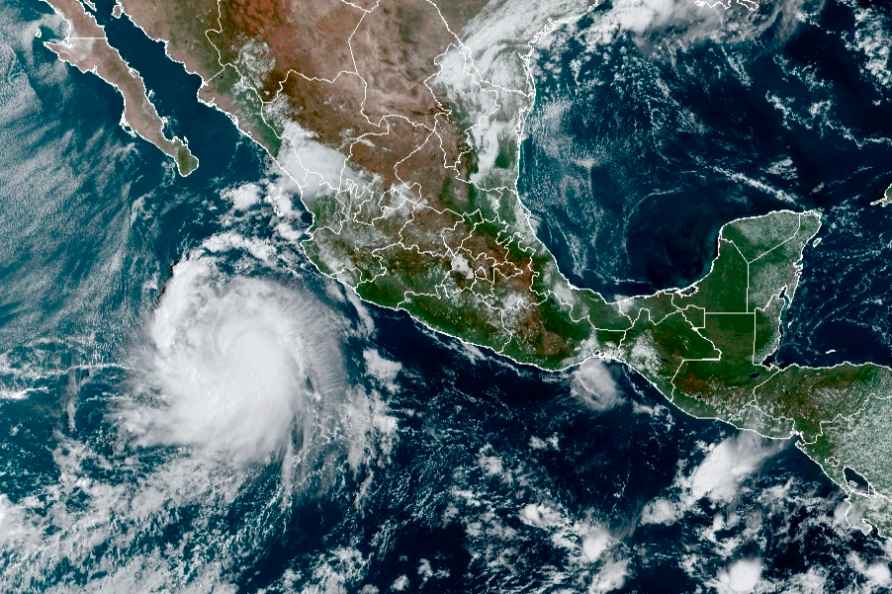 New Delhi, Oct 28 : The 2021 Antarctic ozone hole reached its maximum area on October 7 and is now the 13th largest since 1979, scientists from NOAA and NASA have reported. This year's ozone hole developed similarly to last year's: A colder than usual Southern Hemisphere winter led to a deep and larger-than-average hole that will likely persist into November or early December. The National Oceanic and Atmospheric Administration (NOAA) and the NASA are the agencies that have tracked ozen hole over the decades. "This is a large ozone hole because of the colder than average 2021 stratospheric conditions, and without a Montreal Protocol, it would have been much larger," chief scientist for Earth Sciences at NASA's Goddard Space Flight Center, Paul Newman said. What we call the ozone hole is a thinning of the protective ozone layer in the stratosphere (the upper layer of Earth's atmosphere) above Antarctica that begins every September. Chlorine and bromine derived from human-produced compounds are released from reactions on high-altitude polar clouds. The chemical reactions then begin to destroy the ozone layer as the sun rises in the Antarctic at the end of winter. NOAA and NASA researchers detect and measure the growth and break up of the ozone hole with satellite instruments aboard Aura, Suomi-NPP and NOAA-20 satellites, the NOAA said in a release late on Wednesday. This year, NASA satellite observations determined the ozone hole reached a maximum of 24.8 million square km roughly the size of North America, before beginning to shrink in mid-October. Colder-than-average temperatures and strong winds in the stratosphere circling Antarctica contributed to the hole's size. NOAA scientists at the South Pole Station record the ozone layer's thickness by releasing weather balloons carrying ozone-measuring instruments called ozonesondes that measure the varying ozone concentrations as the balloon rises into the stratosphere. When the polar sun rises, NOAA scientists also make measurements with a Dobson Spectropherometer, an optical instrument that records the total amount of ozone between the surface and the edge of space known as the total column ozone value. This year, scientists recorded the lowest total-column ozone value of 102 Dobson Units on October 7, the eighth lowest since 1986. At altitudes between 14 to 21 km, ozone was nearly completely absent during the ozone hole's maximum size. Though the 2021 Antarctic ozone hole is larger than average, it's substantially smaller than ozone holes measured during the late 1990s and early 2000s. The ozone hole is recovering due to the Montreal Protocol and subsequent amendments banning the release of harmful ozone-depleting chemicals called chlorofluorocarbons. If atmospheric chlorine levels from CFCs were as high today as they were in the early 2000s, this year's ozone hole would likely have been larger by about 4 million square km under the same weather conditions. /IANS

Jumme Khan and the world in a story
By Sukant Deepak New Delhi, Dec 3 : He describes himself as a 'Shiv bhakt' and a 'Muslim Jogi'. In his world, stories are not mere tales that enter

Mexico City, Dec 4 : Mexico detected its first case of the Covid-19 Omicron variant in a person who arrived in the country from South Africa on November 21, the Health Ministry has said. Six day […]

Brussels, Dec 4 : The European Union (EU)'s Telecommunications Ministers approved measures for a high common level of cybersecurity across the bloc, including a new directive, Slovenian Minister for P […]

Washington, Dec 4 : The US President Joe Biden has signed a short-term funding bill that will keep the federal government running through February 18, 2022, avoiding a looming partial shutdown. […]

Paris, Dec 4 : The French government has announced new travel restrictions that will enter into force on Saturday. Alongside France's green-orange-red classification scheme for countries accordi […]