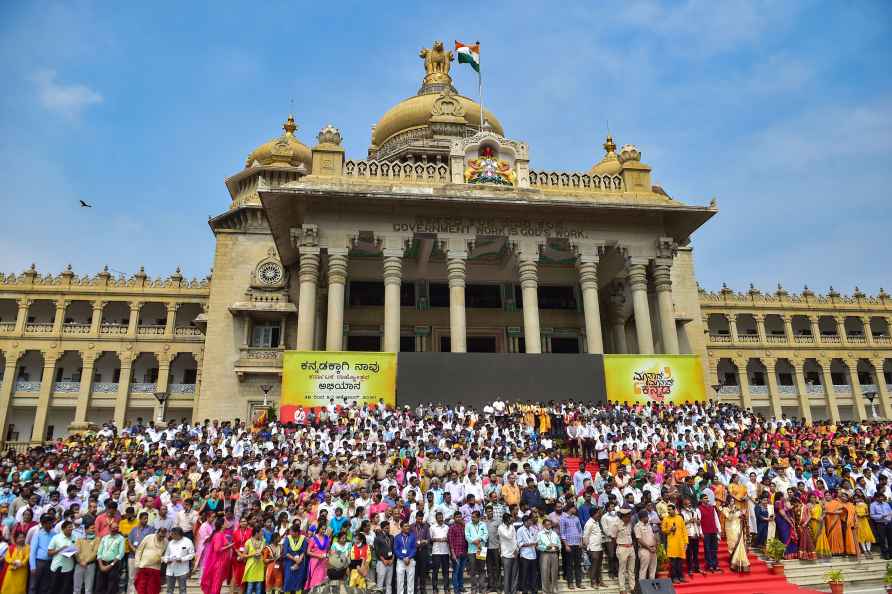 [Bengaluru: Ministers, bureaucrats, government employees and citizens take part in a programme to promote the Kannada language in Bengaluru, Thursday, Oct. 28, 2021. The Karnataka government organised a musical programme in which five lakh people across the state simultaneously sang three songs at iconic tourist attractions, as part of the state government's Kannada Rajyotsava celebrations. ( /PTI] Bengaluru, Oct 28 : The Karnataka government has put on hold a proposal to survey official, unofficial churches and Bible societies and is waiting for the verdict of the state High Court on a PIL in this regard. The Committee on Welfare of Backward Classes and Minorities discussed the survey aimed at checking alleged forced conversions on October 13, and asked the Deputy Commissioners to carry out the exercise. Acting Chairman of the Committee Goolihatti Shekar vehemently proposed for the survey and had also raised the issue in the Monsoon session of the Assembly. Shekar, also a BJP MLA, had stated on the floor of the House that conversion is rampant in his Hosadurga constituency. "Even his mother has been converted and missionaries got those who questioned conversions booked under atrocity and rape charges," he claimed. Shekar later organised a "Ghar wapsi" programme in his constituency in which many families were brought back to Hindu religion. He also stated that his mother, who embraced Christianity, returned to Hinduism. Christian religious leaders and progressive thinkers held press conferences across the state to condemn the move of the government to conduct surveys of churches. Shekar apologised if he had hurt anyone's religious sentiments with his statements. He maintained that he is opposed to forceful religious conversions. Only five of the 20 members of the Legislature Committee were present for the meeting on Wednesday and it could not take place for want of quorum. The meeting is expected to take place on Thursday. The panel's tenure will end on November 9 and the Speaker of the Assembly Vishveshwara Hegde Kageri will formulate a new committee by mid-November, sources in the government stated. Government officers explained that the survey is not feasible as it goes against the Constitution. The government is also waiting to see how the High Court responds to the PIL filed against conducting a survey of churches. As many as 36 cases of religious conversions have been reported in the state this year. /IANS