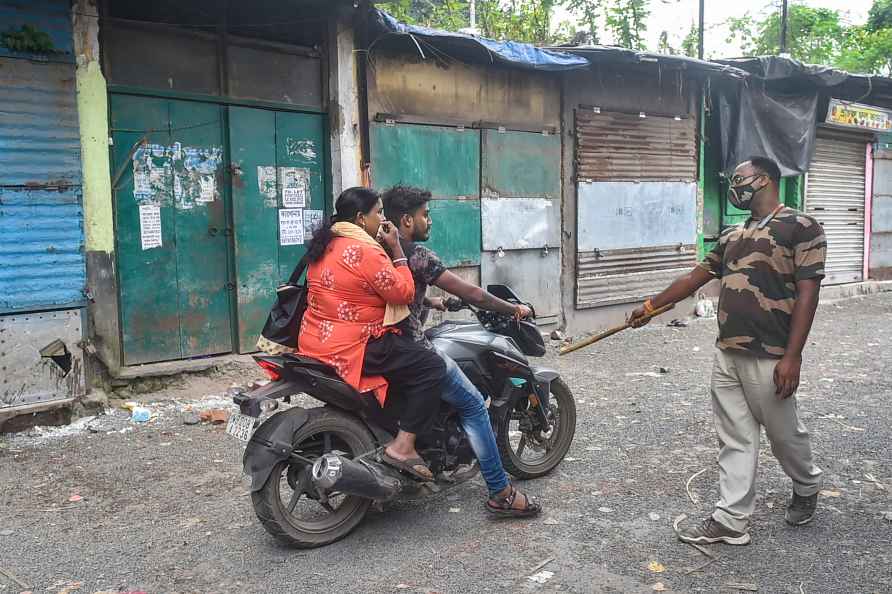 [South 24 Parganas: Police stop bike riders for not wearing protective face masks, at a market area which has been for three days in the view of rise in fresh Covid-19 cases after Durga puja festivities, in South 24 Parganas, Thursday, Oct 28, 2021. ( /PTI] Seoul, Oct 28 : South Korean health authorities are on high alert ahead of the upcoming Halloween weekend, as Seoul's downtown areas are expected to be crowded with larger-than-usual numbers of people celebrating the annual Western holiday amid the Covid-19 pandemic. Coronavirus-battered retailers in Seoul's popular entertainment districts, such as Itaewon and Hongdae, are looking forward to boom sales of Halloween-themed products, food, drinks and various other consumer goods, particularly because of the government's recent decision to phase out long-enforced strict anti-virus restrictions from November, reports Yonhap News Agency. But there is also growing concern about a possible spread of cluster Covid-19 infections tied to hot Halloween spots, prompting authorities to ask both citizens and merchants to wear masks and observe other quarantine and distancing rules. With three days to go before Halloween, the streets of Itaewon, an international district known for foreigner-friendly restaurants, shops and bars, were still quiet but a festive atmosphere can be felt everywhere. Some shops on the main street, where bars and restaurants are clustered, decorated the interiors with pumpkin-shaped ornaments, a symbol of Halloween, or with spider webs and ghost props hung from the ceiling to create a Halloween atmosphere. "It seems quiet now, but there are more people than usual. It will be more crowded on Friday or the weekend," said a restaurant owner. Large clubs appeared to refrain from actively publicizing their Halloween parties, apparently aware of the current quarantine circumstances. "At this time of the year, flyers advertising Halloween parties and celebrations at clubs used to be posted on the streets for several weeks. But there are none this year," said a club employee who has worked in Itaewon for about seven years. Clubs and other shops in Hongdae, a western Seoul district also known for popular entertainment places, are also busy preparing to welcome customers in anticipation of a Halloween boom. Many "hunting pocha", or casual diners that cater to customers looking for blind dates, and bars have "Happy Halloween" slogans at the entrance or decorated the interior with props such as ghosts and witches. A bar employee wearing a suit from the recently popular Netflix drama 'Squid Game' was seen soliciting customers. Street vendors were also selling pumpkin models, headbands decorated with ghosts and 'Squid Game' masks, among others. "I didn't expect the Halloween atmosphere to be hot like this. I've been wanting to go to a pocha after a long time, but I'm still reluctant to gather with a lot of people," said a man surnamed Jung, who came to Hongdae with a friend. At the same time, a batch of municipal officials was seen walking down the Hongdae streets, holding signs urging people to wear a mask. Many shops on the streets around Gangnam Station in southern Seoul were also decorated with Halloween items, though the number of customers has not increased significantly. Earlier this week, the Seoul city government said it will conduct special inspections on entertainment establishments in Itaewon, Hongdae and Gangnam Station areas until Tuesday to ensure that they strictly abide by quarantine and social distancing rules. /IANS

Search for Aussie wicket-keeper for Ashes narrows down to Inglis, Carey: Reports

Sydney, Nov 28 : With just 10 days to go for the first Ashes Test, beginning at the Gabba, Brisbane on December 8, Cricket Australia (CA) is yet to decide on who will be the wicketkeeper for the serie […]

Thiruvananthapuram, Nov 28 : Kerala Education Minister, V. Sivankutty on Sunday said that more than 5,000 teachers of the state have not yet inoculated themselves. He said that this could not be justi […]

Johannesburg, Nov 28 : The South African National Parks (SANParks) is doing mass booking amendments from residents of various countries across the world following the banning of flights from some west […]