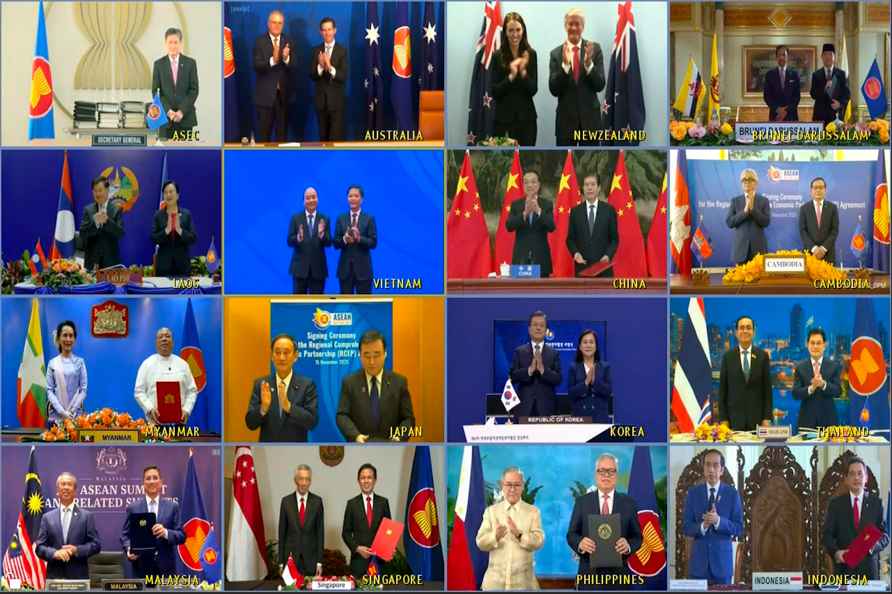 New Delhi, Oct 28 : Climate impacts would tear through G20 countries without urgent action to reduce emissions, and in India, it could mean declines in rice and wheat production, causing economic losses of up to 81 billion euros and a loss of 15 per cent of farmers' incomes by 2050, a new report revealed on Thursday The first study of its kind, the G20 Climate Impacts Atlas by the Euro-Mediterranean Center on Climate Change (CMCC), the leading Italian research centre on climate change and National Focal Point for the IPCC, collates scientific projections of how climate impacts will play out in the world's richest countries over the coming years. It finds that on a high-emissions pathway, climate impacts spiral to cause devastating damage across the G20. The research shows that rising temperatures and intense heatwaves could cause severe droughts; threatening essential water supplies for agriculture, causing huge loss of human life and increasing the chance of deadly fires. In specific countries, this could mean heatwaves could last at least 10 times longer in all G20 countries, with heatwaves in Argentina, Brazil and Indonesia lasting over 60 times longer by 2050. In Australia, bushfires, coastal floods and hurricanes could raise insurance costs and reduce property values by A$611 billion by 2050. The report finds that without urgent action to reduce carbon emissions, GDP losses due to climate damage in G20 countries increase each year, rising to at least four per cent annually by 2050. This could reach over eight per cent by 2100, equivalent to twice the bloc's economic losses from Covid-19. Some countries will be even worse hit, such as Canada, which could see at least 4 per cent knocked off its GDP by 2050 and over 13 per cent -- 133 billion euros -- by 2100. Donatella Spano of the CMCC, who coordinated the report, said: "From droughts, heatwaves and sea level rise, to dwindling food supplies and threats to tourism -- these findings show how severely climate change will hit the world's biggest economies, unless we act now. "As scientists, we know that only rapid action to tackle emissions and adapt to climate change will limit the severe impacts of climate change. At the upcoming summit, we invite G20 governments to listen to the science and put the world on a path to a better, fairer and more stable future." From coastal erosion to the spread of tropical diseases, every G20 country is at risk from the impacts of climate change. The research shows in Europe, deaths from extreme heat could rise from 2,700 per year to 90,000 each year by 2100 on a high emissions pathway. By 2050, potential fish catch could fall by a fifth in Indonesia -- uprooting hundreds of thousands of livelihoods. The sea level rise could wreck coastal infrastructure within 30 years, with Japan set to lose 404 billion euro and South Africa 815 million euro by 2050, on a high emissions pathway. Conversely, the faster G20 countries adopt low-carbon policies, the less the climate impacts cascade and the more manageable they become. Limiting temperature rise to two degrees Celsius could see the cost of climate impacts in the G20 drop to just 0.1 per cent of its total GDP by 2050 and 1.3 per cent by 2100. At the Paris Agreement, signed in 2015, countries agreed to limit global heating to acewell below" two degrees --however, current policies and promises put the world on track for about three degrees. Laurence Tubiana, head of the European Climate Foundation and one of the architects of the Paris Agreement, said: "The window to act is closing fast. As the G20 countries incentivize economic recovery from Covid-19 and prepare climate plans ahead of COP26, they face an urgent choice: to protect the global economy and make a rapid transition to a low-carbon future; or derail the global economy by pursuing polluting policies. It's time for the G20 to make its economic agenda a climate agenda." /IANS

Mainly clear sky, very poor air quality in Delhi-NCR
New Delhi, Nov 27 : Delhi-NCR woke up to a mainly clear sky with an overall Air Quality Index (AQI) of 384 and a minimum temperature that is likely to

Thiruvananthapuram, Nov 27 : The Kerala government on Saturday exempted children below ten years of age from cumpulsory RT-PCR testing before visiting the famed Sabarimala temple. In a fresh dir […]

Addis Ababa, Nov 27 : The number of confirmed Covid-19 cases in Africa reached 8,616,912 as of Friday afternoon, the Africa Centers for Disease Control and Prevention (Africa CDC) said. The Afri […]

New Delhi, Nov 27 : A Delhi Court on Saturday issued summons to former Union Minister P. Chidambaram, his son Karti Chidambaram and others in ED and CBI cases in connection with the Aircel Maxis case. […]