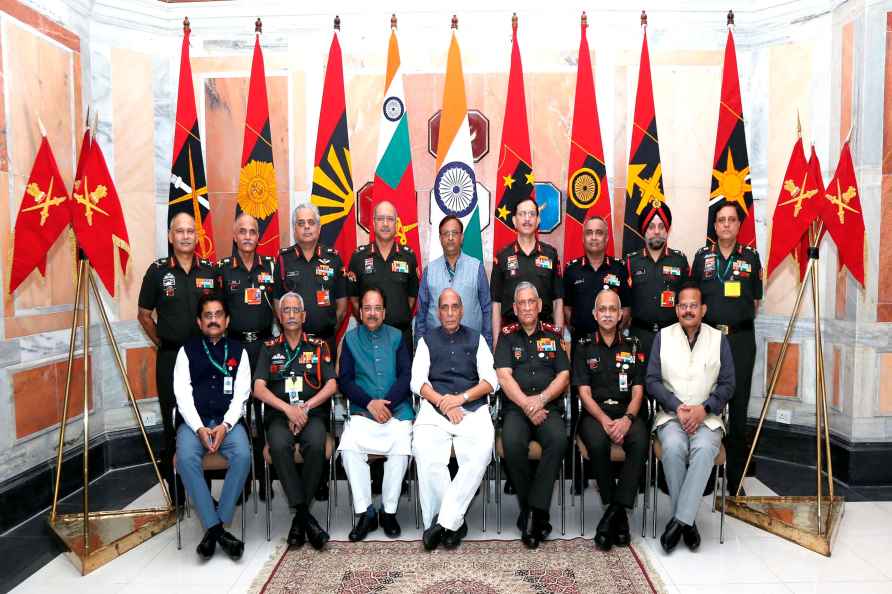 [**EDS: TWITTER IMAGE POSTED BY @rajnathsingh ON WEDNESDAY, OCT. 27, 2021.** New Delhi: Defence Minister Rajnath Singh with MoS for Defence Ajay Bhatt, Chief of the Defence Staff General Bipin Rawat, Chief of the Army Staff General MM Naravane and other Army officials during the Army Commanders' Conference, in New Delhi. ( /PTI] Khartoum, Oct 27 : Detained Sudanese Prime Minister Abdalla Hamdok was released the same day as army chief Abdel Fattah Al-Burhan said the state of emergency could be lifted soon. Hamdok's office announced on Tuesday that Hamdok has returned home with his wife under tight security, while some other ministers and civilian leaders remained detained. They were arrested on Monday as Al-Burhan, general commander of the Sudanese Armed Forces, declared a state of emergency across the country, dissolved the transitional Sovereign Council and the government, and relieved the state governors, saying that the differences among the partners of the transitional period in Sudan had pushed the armed forces to intervene to prevent the country from sliding into chaos, news agency Xinhua reported. However, the army chief denied the "arrest" of Hamdok, saying the prime minister was staying at Al-Burhan's house and was safe, until being released. During a press conference on Tuesday, Al-Burhan said that "the state of emergency will be cancelled as soon as the institutions are formed," adding that Internet and communication services would resume gradually. He also vowed to "correct the path of the transition" and denied his actions were a military coup. "The coming government will be a pure civilian government comprising of national competencies and will not include any partisans," he said. The military takeover in Sudan on Monday triggered demonstrations in the capital Khartoum and concerns among the international community. "All parties must immediately return to dialogue and engage in good faith to restore the constitutional order," said Volker Perthes, United Nations Secretary-General Antonio Guterres' special representative for Sudan, urging all parties to exercise the utmost restraint. Arab League Secretary-General Ahmed Aboul-Gheit also noted that it is important to refrain from any measures that would disrupt the transitional period and stability in Sudan. Sudan is in a 39-month transitional period and is ruled by a transitional government of military and civilian elements, which was established after the ouster of former President Omar al-Bashir in April 2019. The transitional period is set to be followed by elections to form a new government. /IANS

Karachi, Sep 23 : England left-arm seam bowler Luke Wood has said he is inspired by Wasim Akram and his country's former quick Ryan Sidebottom, revealing that the words of wisdom from the Pakistani gr […]

London, Sep 23 : County side Kent and Test skipper Ben Stokes are reportedly not in favour of the England and Wales Cricket Board's (ECB) proposals to reduce the number of County Championship matches […]

Berlin, Sep 23 : Kylian Mbappe added another fine solo goal in France's 2-0 victory against Austria, while the Netherlands, Belgium and Croatia all claimed wins in the UEFA Nations League late on Thur […]