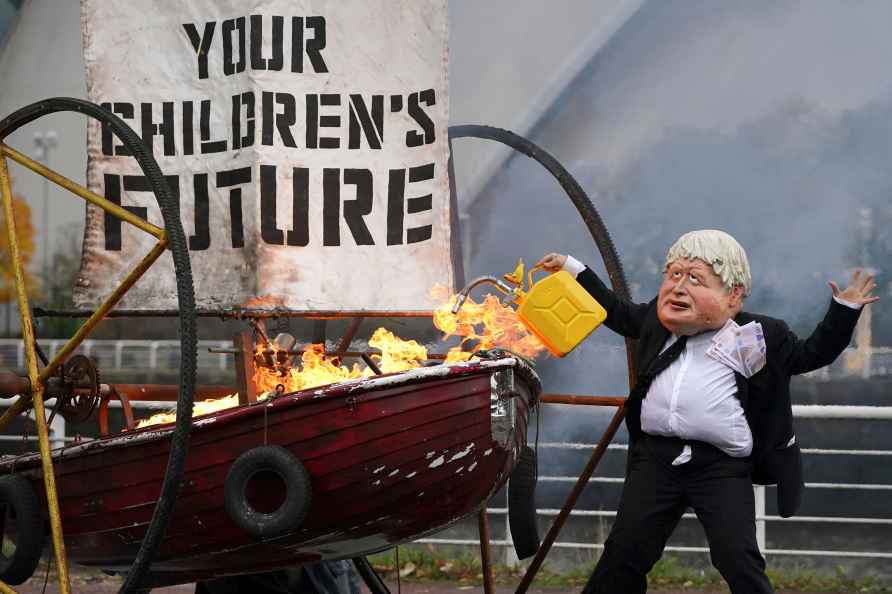 [Glasgow: A performer from environmental campaign Ocean Rebellion dressed as Prime Minister Boris Johnson sets light to the sail of a small boat which reads "Your Children's Future" during a protest on the banks of the River Clyde, close to the site of the upcoming United Nations COP26 conference on climate, in Glasgow, Scotland, Wednesday Oct. 27, 2021. /PTI] BY VISHAL GULATI Dharamsala, Oct 27 : To adapt to the effects of climate change impacting the Tibetan Plateau -- the world's 'third pole' -- a group of Tibetans in exile will explain its role in the global climate system and why it should be part of the global climate conversation at the upcoming two-week United Nations climate conference, COP26, in Glasgow in Britain. Advocacy group International Campaign for Tibet says the COP26 will be an important chance to tell policymakers why the plateau needs to be part of the global talks. Its interdisciplinary panel on the sidelines of the COP26 will discuss the lessons Tibet offers for designing inclusive and sustainable global climate policies, and provide practical recommendations for next steps. Just ahead of the COP26, slated to meet between October 31 and November 12, globetrotting Tibetan spiritual leader, the Dalai Lama, is issuing a video message on October 29, urging the climate scientists, state heads and business leaders for the urgent need for climate action to save Mother Nature. The Tibetan Plateau is close to two per cent of the planet's land surface, the size of Western Europe, and with as much global importance as other comparable geographies, perhaps more since the elevation of the plateau has a global impact on jetstream, monsoon dynamics, and the water cycle of the entire northern hemisphere. Another advocacy Tibetan Centre of Human Rights and Democracy says Tibet experiences rapid climate change that damages glaciers, causes floods and lake overtopping, melts permafrost, compromises livelihoods, and dries wetlands essential to the East Asian flyway routes of seasonally migrating birds, threatening extinction. "Warmer and wetter makes Tibet more like China, which is good from China's point of view," it says in a statement. Tibetan nature's contribution to humanity is exceptionally big. Although Tibet and the Tibetans have little to no role in causing the rapid rise in methane emissions, rainfall, ozone hole above Tibet, or the rising runoff from Tibetan rivers, China, immediately downstream, harvests a dividend of extra runoff at least as long as it may take for the glaciers to disappear, it says. China plans to further intensify urbanisation, which further extracts water and resources from remote areas to feed city demand. China is officially committed to attaining equality of wealth and consumption on par with the richest nations, which is unsustainable, imposing on the whole planet a footprint that is unbearable. China imports from Tibet enormous quantities of clean water, clean air, minerals, and electricity, yet Tibetans are marginalised, silenced, racially stigmatised, and not acknowledged as providers of ecosystem services, it adds. Also the Central Tibetan Administration (CTA), the government in exile headquartered in this Himachal Pradesh hill station, has expressed concern over the deteriorating environment in the highly fragile Tibetan Plateau. The latest publication of the Environment and Development Desk of the Tibet Policy Institute, 'Tibetan Perspectives on Tibet's Environment', was released here last month by CTA President Penpa Tsering. He said the book was a much-needed repository of information and facts valuable for the world to understand the environmental issues of Tibet over the last 10 years and its relevance to global climate change. According to Tsering, having such a comprehensive book written solely by Tibetan researchers, some of whom have lived the experiences of the changing ecology of Tibet, offers an important aspect to the issue that is necessary and something that he noted is rarely found in books written by non-Tibetan researchers. The book is an added value and important source of reference to the experts and researchers on Tibet's ecology, he said. Tsering reiterated that the book was equally a call out to the Tibetans in exile to understand the significance of preserving Tibet's environment as well as to act responsibly. He noted the book will be a contributing factor to those attending the forthcoming COP26 UN conference on climate change. Environment and Development Desk Executive Head Tempa Zamlha explains to IANS the background context of the book, which is a compilation of reports, papers and articles prepared from 2010-2020. Tibetan spiritual leader and Nobel laureate the Dalai Lama has been saying his homeland Tibet is currently vulnerable to climate change. He has been emphasising that "climate change is not the concern of just one or two nations. It is an issue that affects all humanity and every living being on this earth and that there is a real need for a greater sense of global responsibility based on a sense of the oneness of humanity". According to the Intergovernmental Panel on Climate Change's (IPCC) latest report, mountain and polar glaciers are committed to continue melting for decades or centuries. Glacier mass loss is a dominant contributor to global mean sea-level rise. It may also cause low-likelihood, high-impact outcomes, characterised by deep uncertainty and sometimes involving tipping points. In the context of the Hindu Kush Himalaya, the report says the mountain glaciers like in the Himalayas are included in the assessment, and human influence is responsible for the retreat of glaciers since the 20th century, and that is not only in the two poles but also mountain glaciers. (Vishal Gulati can be contacted at vishal.g@ians.in) /IANS

MSP panel: Govt seeks five names from farmers, SKM seeks more clarity
New Delhi, Nov 30 : A day after the three contentious farm laws were repealed by the Parliament, the government on Tuesday reached out to the agitatin

Now connect with people on LinkedIn in Hindi

Bihar minister boycotts assembly after his car stopped at gate

Not right to resort to Internet shutdown every time: Parliament panel

New Delhi, Dec 2 : The Standing Committee on Communications and Information Technology has recommended that the Union government should not shutdown the Internet services in every case, saying that th […]