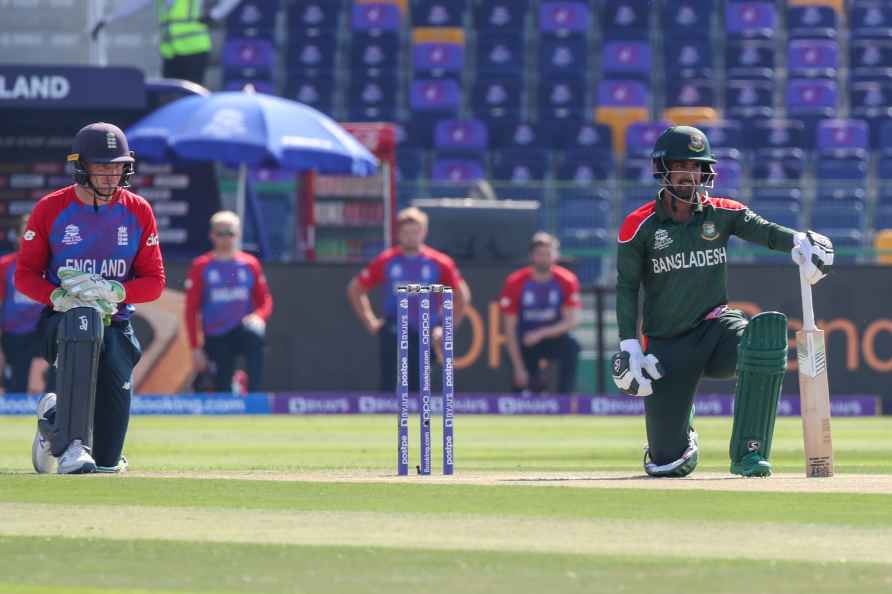 [Abu Dhabi: Bangladesh's Liton Das, right, takes a knee in support of the Black Lives Matter movement with England's Jos Buttler ahead of the Cricket Twenty20 World Cup match between England and Bangladesh in Abu Dhabi, UAE, Wednesday, Oct. 27, 2021. /PTI] Abu Dhabi, Oct 27 : The Eoin Morgan-led England will tread with caution when they take on Bangladesh in their ICC T20 World Cup 'Super 12' game at the Zayed Cricket Stadium here later on Wednesday, given that the two sides have never played a T20I game. England, who are the No.1 ranked T20I side, thus come into their match against Bangladesh with some wariness, careful not to underestimate the challenge of a side that has beaten the likes of Australia and New Zealand on home soil recently. The teams have had contrasting runs so far in the tournament. While England crushed West Indies, reducing the defending champions to 55 in their opening match, Bangladesh were rattled by Scotland before they made it to the 'Super 12', where they lost their first match to Sri Lanka despite posting a strong total. Another loss will make their hopes of progressing to the next round difficult. Bangladesh coach, Ottis Gibson, who has worked with England a few years ago and is familiar with their approach, will use that knowledge to guide his side in the crucial match. "The message is not to panic, understand that you are going to get hit," he said. "You might bowl a good ball and get hit because that's their mentality, but they also give you opportunities to take wickets." England could choose to go with an unchanged side. With Mark Wood fit and available for selection, England might be tempted to include his express pace instead of a batter. England's spin-bowling all-rounder, Moeen Ali, who was 'Player of the Match' against th West Indies for his 2/17, is coming off a successful Indian Premier League and is high on confidence. He could be effective against Bangladesh's left-handers. For Bangladesh, left-arm seamer Mustafizur Rahman has taken six wickets in the tournament so far, and while he went wicketless in the last couple of games and has struggled with his lines at times, he remains a threat with his variations. England batter Jos Buttler said, "We know the challenges we'll face. We've played against them lots in 50-over cricket. We know they are a dangerous side. They have got a lot of experience in T20 cricket as well, some very good players playing quite a specific style that is quite unique to them. We focus obviously and try to plan for the opposition but at the same time we are focusing on ourselves, trying to get our level of intensity to the place it needs to be." Bangladesh coach Gibson said, "We know that England are a very powerful line-up, and we know that we have to be on our A game if we're going to really challenge them and ultimately win the game. We know that they're going to come out hard, but we know that they also give you chances." Bangladesh probable XI: Mohammad Naim, Liton Das, Shakib Al Hasan, Mushfiqur Rahim, Mahmudullah (capt), Afif Hossain, Nurul Hasan (wk), Mahedi Hasan, Mohammad Saifuddin, Taskin Ahmed, Mustafizur Rahman. England probable XI: Jason Roy, Jos Buttler (wk), Jonny Bairstow, Liam Livingstone, Eoin Morgan, Moeen Ali, Chris Woakes, Chris Jordan, Adil Rashid, Mark Wood, Tymal Mills. /IANS

Global investors view Shehbaz's appeal as sign of imminent default on foreign debt
[Karachi: A Pakistani patient suffering from dengue fever, a mosquito-borne disease, is treated in an isolation ward, at a hospital in Karachi, Pakist

Bengaluru, Sep 23 : The inquiry of two suspected IS terrorists in Karnataka has revealed that they wanted to help establish a caliphate in India with Sharia law in place of the existing Central govern […]

By Vishnu Makhijani New Delhi, Sep 23 : A hundred and fifty years ago, Bhawal was a prosperous zamindari in the eastern part of undivided Bengal, in size and income next only to that owned by the Kh […]

New York, Sep 23 : With debt obligations drawing to a close, Pakistan Prime Minister Shehbaz Sharif has made an urgent appeal for relief in the repayment of debts from rich nations, reminding them tha […]