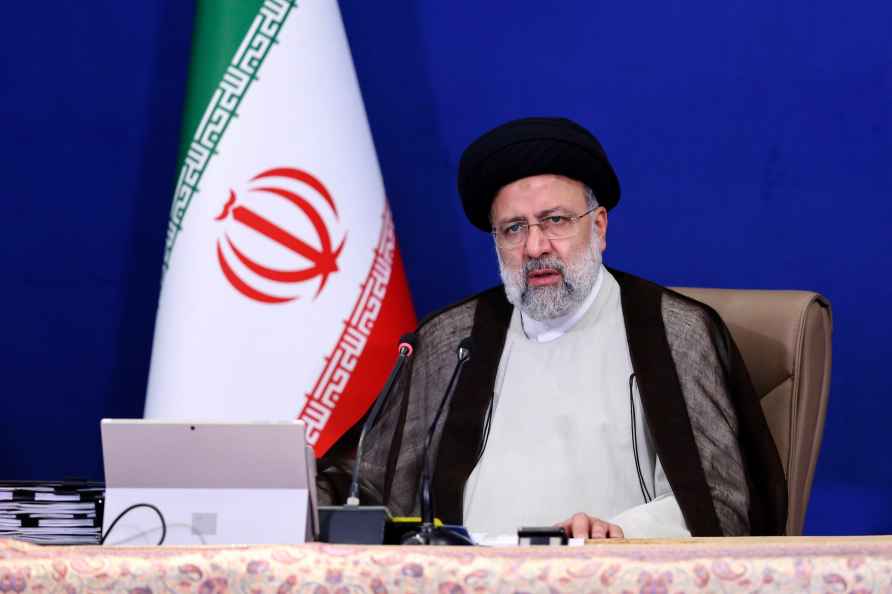 [Tehran: In this photo released by the official website of the office of the Iranian Presidency, President Ebrahim Raisi speaks during a cabinet meeting in Tehran, Iran, Wednesday, Oct. 27, 2021. Raisi said Wednesday that a cyberattack which paralyzed every gas station in the Islamic Republic was designed to get "people angry by creating disorder and disruption," as long lines still snaked around the pumps a day after the incident began. /PTI] Hyderabad, Oct 27 : Leaders of the ruling Telangana Rashtra Samithi (TRS) and the opposition, Bharatiya Janata Party (BJP) and the Congress, were engaged in hectic last-ditch effort to woo voters in Huzurabad Assembly constituency, where the campaigning for October 30 bypolls is ending Wednesday evening. Ministers Harish Rao, Srinivas Yadav, Koppula Eshwar, Gangula Kamalakar and other TRS leaders were carrying out intensive campaigning for what is billed as a prestige battle for the ruling party. Highlighting the government's welfare programmes and targeting BJP for neglecting Telangana and rising fuel prices, they were going all out for the victory of party's candidate G. Srinivas Yadav. On the other hand, BJP's central leader incharge for Telangana Tarun Chugh, Union Minister for Tourism and Culture G. Kishan Reddy, state BJP chief Bandi Sanjay and party's candidate Eatala Rajender were campaigning aggressively on the last day. The day will also see intense campaigning by state Congress chief A. Revanth Reddy, Congress Legislature Party leader Mallu Bhatti Vikramarka and MP Uttam Kumar Reddy in favour of party candidate B. Venkata Narsing Rao. The by-election was necessitated by the resignation of Eatala Rajender. He quit TRS in June, a month after he was dropped from the State Cabinet following allegations of land grabbing. He switched loyalties to BJP. Rajender, who is locked in a three-cornered contest with TRS and Congress, has been targeting TRS president and Chief Minister K. Chandrasekhar Rao for what he calls his dictatorial style of functioning. He has been calling the by-election a fight for people's self-respect. TRS leader and Finance Minister Harish Rao, who had been leading the ruling party's campaign for four months, alleged that Rajender has mortgaged the self-respect to BJP. He has been targeting the saffron party for neglecting Telangana in all the sectors and for the steep hike in prices of fuel, especially cooking gas. The TRS campaign was without its president and Chief Minister Chandrasekhar Rao and his son K.T. Rama Rao, who is a minister as well as the party's working president. The ruling party alleged that the restrictions imposed by the Election Commission of India (ECI) prevented Chandrasekhar Rao from addressing election meetings in the constituency. Addressing TRS plenary in Hyderabad on Monday, KCR had slammed ECI for crossing its limits. The TRS chief also found fault with the poll panel for stopping implementation of 'Dalit Bandhu' scheme in the constituency. During the campaign, the TRS leaders targeted the opposition parties for what they called stalling the scheme. Launched in August on pilot basis in Huzurabad, 'Dalit Bandhu' is aimed at socio-economic empowerment of Dalits by providing Rs 10 lakh grant to every Dalit family to take up any business of its choice. The government had released Rs 2,000 crore for implementing the scheme in Huzurabad. Political analysts say the outcome will be crucial for KCR, who wants to make sure that he faces no challenge to his leadership in the run-up to the 2023 polls. A win for Eatala will not only embolden other voices of dissent against KCR but will also bolster BJP's attempts to emerge as the only viable alternative to TRS. BJP is banking heavily on Rajender's popularity in the constituency. The by-election is also a battle for prestige for BJP state chief Bandi Sanjay as Huzurabad forms part of his Karimnagar Lok Sabha constituency. BJP hardly had any presence in Huzurabad. In 2018, its candidate P. Raghu polled only 1,683 votes, which was less than NOTA votes (2867). Rajender has been winning Huzurabad for TRS since 2009 when defeated his nearest rival V. Krishna Mohan Rao of Congress by 15,035 votes. In 2010 by-polls, Rajender increased his victory margin to nearly 80,000 and this time his nearest rival was M. Damodar Reddy of TDP. In the 2014 elections held just before the formation of Telangana State, Rajender retained Huzurabad with a majority of 57,037 votes. K. Sudershan Reddy of Congress was runners-up. Rajender continued his winning streak from Huzurabad in 2018, defeating his nearest rival Kaushik Reddy of Congress by 47,803 votes. The BJP is confident of repeating Dubbak performance in Huzurabad. In the by-election to Dubbak Assembly constituency held in November last year, BJP had pulled off a sensational victory to stun TRS. A month later, the saffron party came out with an impressive performance in the elections to Greater Hyderabad Municipal Corporation (GHMC). Following these victories, BJP intensified its efforts towards the goal of capturing power in the 2023 elections. However, the outcome of elections to two graduates' constituencies of Legislative Council in March and by-election in Nagarjuna Sagar came as a disappointment to the party. /IANS

Man returning from Dubai held for carrying liquor in Patna

Patna, Dec 8 : An electrical engineer returning from Dubai was arrested on charges of violating liquor ban after a wine bottle was found in his possession here, police said on Wednesday. He had […]