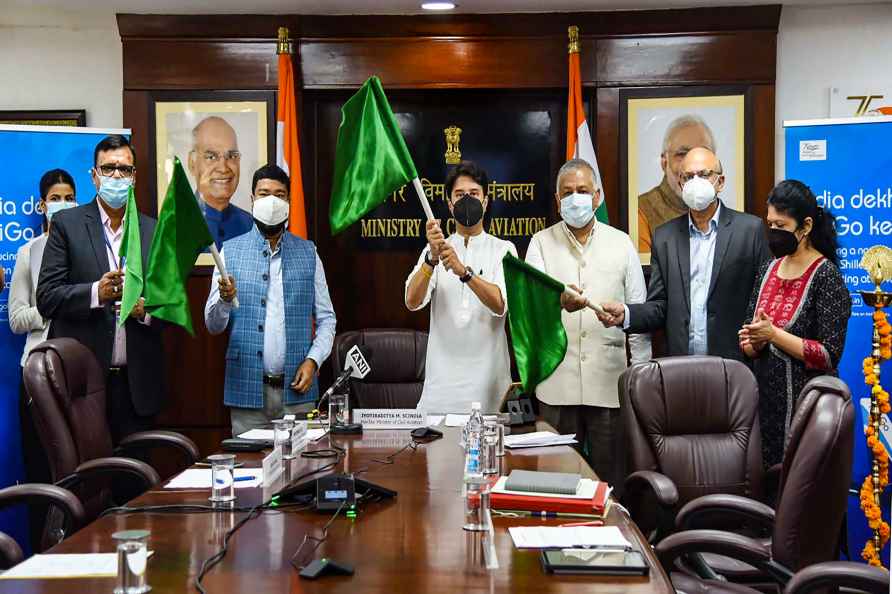 [**EDS: IMAGE MADE AVAILABLE FROM PIB** New Delhi: Union Minister for Civil Aviation Jyotiraditya M. Scindia virtually flags off the Shillong-Dibrugarh flight, in New Delhi, Tuesday, October 26, 2021. Union Minister of State for Civil Aviation General (Retd.) V.K. Singh, Minister of State for Petroleum & Natural Gas, Rameswar Teli and Ministry of Civil Aviation Secretary Rajiv Bansal are also seen. ( /PTI] New Delhi, Oct 26 : The Union Ministry of Home Affairs (MHA) will soon send Inter-Ministerial Central Teams (IMCTs) to Kerala and Uttarakhand to assess the damage caused by heavy rain and floods to standing crops and infrastructure, officials here said on Tuesday. The teams will visit the flood-affected areas in these two states and make on the spot assessment after which they will submit a report to the MHA, following which the Ministry will allocate Central assistance from the National Disaster Relief Fund, the officials added. In case of Uttarakhand, the Central government had recently approved Rs 250 crore, and also an additional Rs 749.60 crore was released to the state, the officials said. The Uttarakhand government has estimated the total damage at Rs 7,000 crore and will send a report to the Centre to seek financial assistance from it. Both states witnessed flood situation due to heavy rains and have caused substantial damage to standing crops and infrastructure, while West Bengal and Odisha also faced a similar situation with less damage and casuality. Heavy rains occurred on October 17 which lashed the hilly state for five days, killing at least 64 persons while 3,500 people have been rescued and more than 16,000 others were evacuated to safer places. Union Home Minister Amit Shah visited Uttarakhand on October 20 and 21, during which he conducted an aerial survey of the flood-affected areas with Chief Minister Pushkar Singh Dhami and other state officials. In Kerala, the toll in incidents related to the heavy rain, including landslides and flash floods, rose to 22. The officials of the Kerala government said it will send a report on the damage caused by heavy rains to the Centre. Kerala had faced a similar situation on August 18 this year, and after making an aerial tour of the flood-affected state, Prime Minister Narendra Modi announced financial assistance of Rs 500 crore to the state. /IANS

Some 1,000 refugees in Belarus ready to return to Iraq: State media

Minsk, Nov 26 : Nearly 1,000 Iraqi refugees in Belarus have expressed their readiness to return home while a group of refugees returned to Iraq by plane from Minsk airport, state media reported. […]

Xi extends condolences to Putin over coal mine accident

Beijing, Nov 26 : Chinese President Xi Jinping on Friday sent a message of condolence to Russian President Vladimir Putin over a coal mine accident in Russia that caused heavy casualties. In his […]

Hyderabad, Nov 26 : Telugu actor Pawan Kalyan, who is to appear in Krish's highly-anticipated period action drama, 'Hari Hara Veera Mallu', is prepping up for the upcoming shooting schedule. The […]