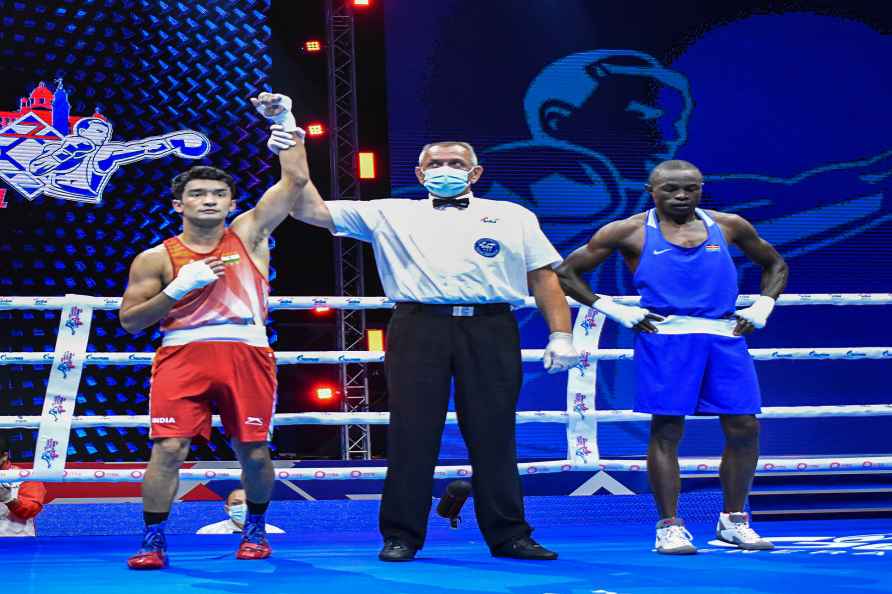 [Belgrade: Indian boxer Shiva Thapa (Red) wins at the 2021 AIBA World Boxing Championships against Kenya?s Victor Nyadera (Blue) in the 63.5kg round-of-64 match, in Belgrade, Tuesday, Oct. 26, 2021. ( /PTI] New Delhi, Oct 26 : Seasoned boxer Shiva Thapa started his campaign at the 2021 AIBA World Boxing Championships with an easy win in Belgrade, Serbia on Tuesday. The bronze medal winner of the 2015 edition and reigning national champion, Thapa looked in good touch against Kenya's Victor Nyadera in the 63.5kg round-of-64 match. With technical supremacy, the boxer from Assam kept control over his opponent throughout the bout before recording a victory by a unanimous margin. With this victory, the five-time Asian Championships medallist Thapa also extended India's unbeaten run at the prestigious tournament after Rohit Mor and Akash Sangwan won their respective opening round bouts on Day 1. Thapa will now take on Sierra Leone's John Brown in the Last-32 clash on Saturday. Later on Tuesday, three more Indians will be seen in action in their respective opening round matches. While Narender (+92kg) will fight against Poland's Oskar Safaryan, Sumit (75kg) will take on Damon O'Neill of Jamaica. On the other hand, Deepak Bhoria (51kg) will have a comparatively difficult challenge in his opening round match as he will start off against two-time Asian champion Azat Usenaliev of Kyrgyzstan on Tuesday. A 13-member Indian contingent has been competing at the 21st edition of the tournament which will go on till November 6. With the participation of 650 top boxers from more than 100 countries, the championships is being played in 13 weight categories as per AIBA's newly introduced weight divisions. The gold medallists of each category will receive $100,000 while silver and bronze medallists will be given $50,000 and $25,000 respectively. Alongside an enormous prize pool of $2.6 million, AIBA will also award the winners with designed medals, made of solid gold and silver respectively, and belts to commemorate their accomplishments. /IANS

Geneva, Nov 29 : It is not yet clear whether the Omicron Covid-19 variant is more transmissible, or causes more severe disease compared to other variants, including Delta, the World Health Organizatio […]

Dar Es Salaam, Nov 29 : Tanzanian authorities have warned that prolonged drought in parts of the country caused by climate change has resulted in water scarcity and deterioration of pasture for livest […]

5 Kurdish security members killed in IS attack in Iraq

Baghdad, Nov 29 : Five Kurdish security members known as Peshmerga were killed in an overnight attack by the militants of the extremist Islamic State (IS) group in northeastern Iraq, a Kurdish securit […]