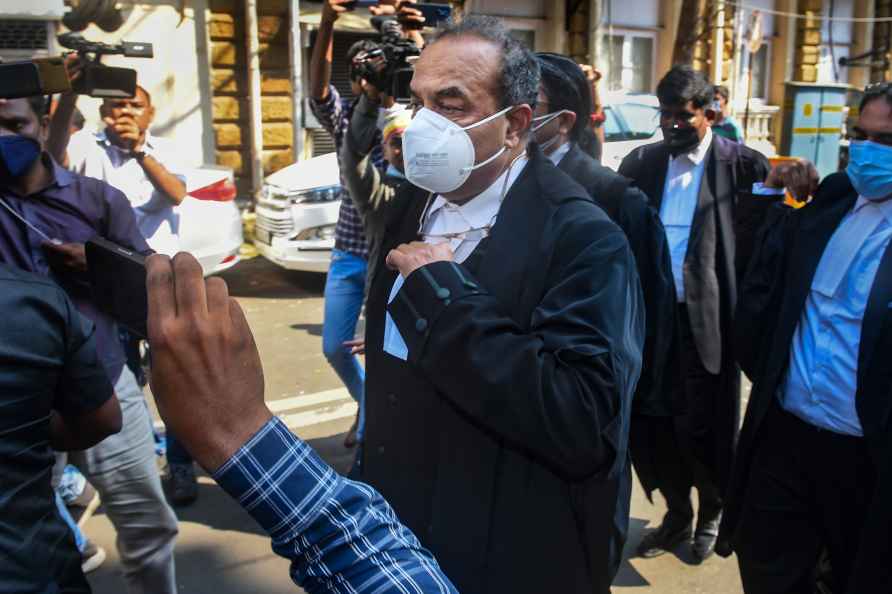 [Mumbai: Former Attorney-General of India (AGI), Mukul Rohatgi representing Aryan Khan, son of Bollywood superstar Shah Rukh Khan, in the drugs-on-cruise case, arrives at Bombay High court in Mumbai, Tuesday, Oct. 26, 2021. ( /PTI] Mumbai, Oct 26 : The Narcotics Control Bureau (NCB) on Tuesday filed its reply and strongly opposed the bail plea of Aryan Khan, son of Bollywood megastar Shah Rukh Khan, before the Bombay High Court. Contending that the bail plea is devoid of merit and must be dismissed, the NCB said that investigations have revealed Khan's international links which show that he is not a mere consumer as claimed by him, prima facie point towards illegal drug procurements. Referring to the affidavit of a 'Panch-Witness' Prabhakar Sail, the NCB termed it as "clear instances of tampering, influencing witnesses in the midst of an ongoing investigation" and Khan's bail plea should be rejected on this ground alone. It stated that Shah Rukh Khan's manager Pooja Dadlani appears to have influenced the Panch-Witness and as soon as this glaring fact came to light, the NCB immediately moved the Special NDPS Court on Monday (October 25). The NCB reply and the bail plea is now slated to be argued by Khan's lawyers, former Attorney General of India Mukul Rohatgi, along with senior advocates like Amit Desai and Satish Maneshinde. Simultaneously, besides Aryan Khan, the bail pleas of two other accused, Arbaaz Merchant and Munmun Dhamecha are also expected to come up for hearing today, as all have been sent to judicial custody till October 30 by the Special NDPS Court. /IANS

New Delhi, Nov 29 : Opposition in both Houses of Parliament has upped its ante against the government as it prepares to repeal the farm laws on Monday. Several MPs from the Congress and other parties […]

Trying to put my best foot forward as I wait for Ashes selection: Wicketkeeper Inglis

Sydney, Nov 29 : Western Australia wicketkeeper Josh Inglis has said that he is just trying to put his "best foot forward" as he waits for the Cricket Australia's (CA) selection panel to take a decisi […]

Chennai, Nov 29 : Heavy rains will shift to South Tamil Nadu on Monday and lash the southern districts till Tuesday, as per the India Meteorological Department. From Tuesday onwards, its intensi […]