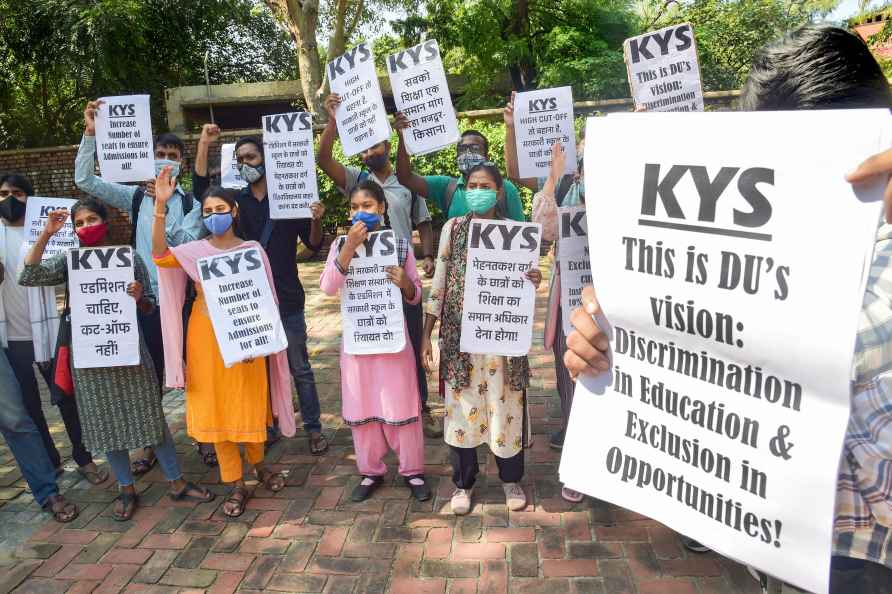 New Delhi, Oct 26 : Delhi University has released a special cut-off list only for a few eligible students, an official said. Registrar of the university, Vikas Gupta, said on Monday the special cut-off is only for those candidates who were eligible for admission on the basis of the cut-off list issued earlier but could not take admission due to some reasons. Delhi University has 70,000 seats for undergraduate course. It has so far released three cut-off lists for admission to these 70,000 seats. A total of 1,70,186 students have applied for admission on the basis of all the three cut-offs so far. Out of these, 58,000 students have got admission in various colleges of Delhi University. The specific cut-off is decided by the colleges based on the availability of vacant seats. Delhi University had released the first cut-off for enrolment on October 1. It has seen an irregular jump as compared to the previous years. As a result, students who got 99 per cent marks were also deprived of admission in many courses of reputed colleges like Hindu, Hansraj, Ramjas etc. The second and third cut-off have also been released in Delhi University. The varsity had released its third cut-off list on October 16. The first cut-off list went up to 100 per cent for several courses in various colleges in Delhi University. There was no significant difference in the second cut-off list as well. In the second list, there was an average drop of 0.25 per cent to 3 per cent in the cut-offs across various colleges. After this, there was no major drop in the third cut-off as well. /IANS

'Why should I cry when I haven't done anything?': K'taka sexual harassment survivor
By M.K. Ashoka Dakshina Kannada (Karnataka), Jan 3 : The survivors of sexual harassment usually do not speak out of fear for societal backlash. Whe

Punjab govt has been asked to fix responsibility for lapse in PM's security and take strict action: MHA.

Punjab govt has been asked to fix responsibility for lapse in PM's security and take strict action: MHA. […]

Gandhinagar, Jan 3 : Aam Admi Party (AAP) leader Ishudan Gadhvi was arrested by Gandhinagar Police on Monday for violations of the Prohibition Act. He was later released on bail after due procedure. […]