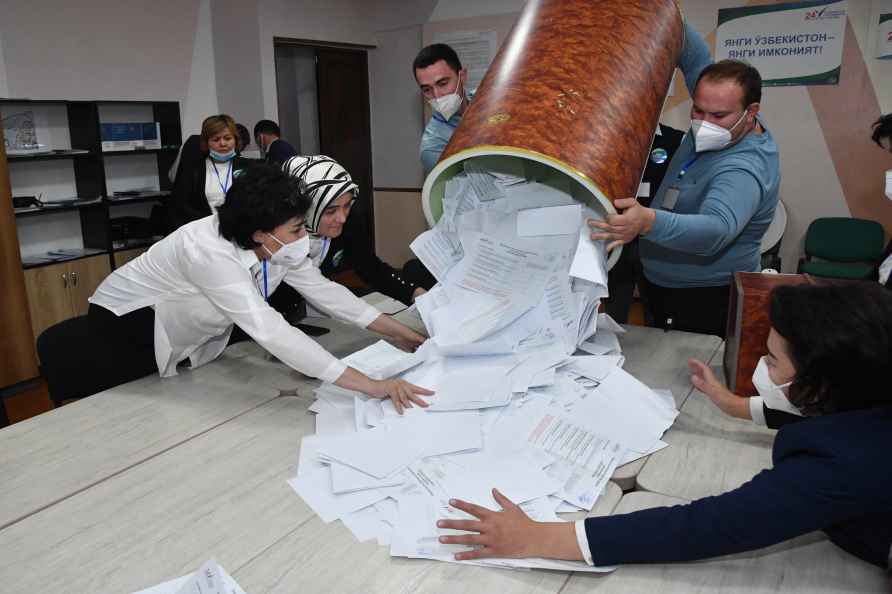 [Tashkent; Members of an election commission remove ballots from a box to count them at a polling station after the presidential election in Tashkent, Uzbekistan, Sunday, Oct. 24, 2021. Uzbekistan's President, Shavkat Mirziyoyev, who has relaxed many of the policies of his dictatorial predecessor but has made little effort at political reform, is expected to win a new term by a landslide against weak competition in an election Sunday. /PTI] Tashkent, Oct 25 : Voting for Uzbekistan's presidential election ended with over 80 per cent turnout which was described by the Central Election Commission as a historic achievement for the country. "Uzbekistan's presidential election was held in accordance with international norms, domestic legislation and in line with democratic principles, open and transparent," commission chairman Zayniddin Nizamkhodjaev said on Sunday. According to the commission, more than 19 million voters had registered for the election, with about 970 international observers and over 1,000 media representatives observing the voting. Polling stations across Uzbekistan opened at 8 a.m. on Sunday evening and closed at 8 p.m., while preliminary results are due on Monday afternoon. Incumbent President Shavkat Mirziyoyev, nominated by the ruling Uzbekistan Liberal Democratic Party, runs for a second term in office. During election campaigning, Mirziyoyev promised to continue reforms to launch more industrial projects, provide jobs and raise living standards in the populous Central Asian nation. Other candidates include Alisher Kadirov from the National Revival Democratic Party, Maksuda Varisova from the People's Democratic Party, Bahrom Abduhalimov from the Adolat (Justice) Social Democratic Party, and Narzullo Oblomurodov from the Ecological Party. /IANS

MSP panel: Govt seeks five names from farmers, SKM seeks more clarity
New Delhi, Nov 30 : A day after the three contentious farm laws were repealed by the Parliament, the government on Tuesday reached out to the agitatin

Combination of factors forced AIADMK leadership to give back cadres their right
[Pyongyang: This photo provided by the North Korean government, North Korean leader Kim Jong Un, center, attends a meeting of the Political Bureau of

Bhubaneswar: Players of Canada (Red) and United States vie for the ball during their match at FIH Odisha Hockey Men's Junior World Cup 2021, at Kalinga Stadium in Bhubaneswar, Thursday, Dec. 2, 2021. […]

Bloemfontein, Dec 1 : India A were 198/5 at stumps after bowling out South Africa A for 297 in their first innings on Day 2 of the second four-day Test, here on Wednesday. While Ishan Kishan sco […]