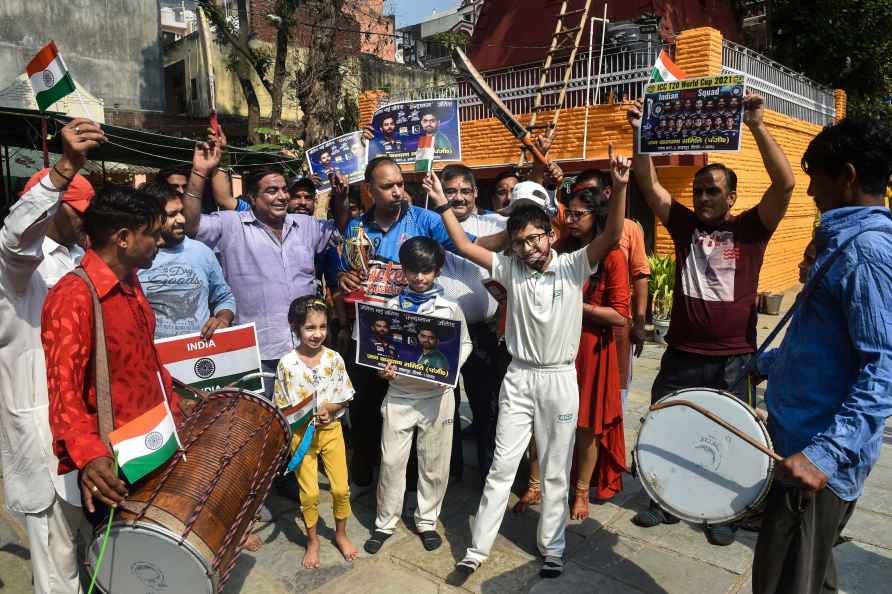 [New Delhi: Cricket fans cheer for Team India ahead of the India vs Pakistan ICC Men's T20 World Cup match in Dubai, while organising a 'yagya' for the victory of Team India, at Ganesh Nagar in East Delhi, Sunday, Oct. 24, 2021. ( /PTI] Dubai, Oct 24 : Superfan 'Chacha Chicago' aka Mohammed Bashir, is all set to cheer teams by donning his unique split India-Pakistan jersey featuring MS Dhoni as the arch-rivals lock horns in a high-octane T20 World Cup match, here on Sunday. Ahead of the mega-clash, a picture of Chacha Chicago wearing a split India-Pakistan jersey featuring Dhoni has gone viral on social media. He has also designed a mask which reads 'Welcome back Dhoni'. Notably, 'Chacha' is a huge admirer of Dhoni and the former India captain has also arranged match tickets for his loyal fan on many occasions in the past. After announcing retirement from international cricket on August 15, 2020, the Ranchi-born cricketer has returned to Team India as mentor for this edition of T20 World Cup. India won the T20 World Cup in 2007 by defeating Pakistan in the final match under Dhoni's captaincy. Both India and Pakistan have faced each other five times in the T20 World Cup and the 'Men in Blue' have won on all the occasions. The arch-rivals come into the clash with decent practice under their belt, having played two warm-up matches each. Pakistan beat West Indies by seven wickets in their first match before losing to South Africa off the last ball in the second. India, the 2007 champions, on the other hand, won both their warm-up matches, beating England and Australia. /IANS

Irula tribals staying in temple premises allege threat by DMK leader
[Gurugram: People from Hindu community perform 'hawan' at an open ground while people from the Muslim community offer 'namaz' at a corner of the same

Moon to preside over Covid response meeting amid surge

Seoul, Nov 26 : South Korean President Moon Jae-in will preside over a Covid-19 response meeting next week as the country is battling an ongoing surge in serious cases after easing some social distanc […]

How can the parties which have lost their democratic character protect democracy: Modi

New Delhi, Nov 26 : Prime Minister Narendra Modi on Friday hit out at the opposition parties and said that 'how can the parties which have lost their democratic character protect democracy'. Pri […]