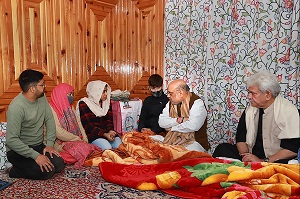 Srinagar, Oct 23 (IANS) Union Home Minister Amit Shah on Saturday met the family of J&K Police officer, Parvez Ahmad Dar, who was killed by militants in June this year. Immediately after his arrival here earlier in the day, the Minister drove to the Nowgam area on the outskirts of Srinagar where he offered condolences to Fatima, the slain officer's wife, his daughter and son. Following his visit, the Home Minister said in a tweet that the "entire nation is proud of the supreme sacrifice made by the officer". He added that the "J&K Police were working towards the fulfilment of the Prime Minister Narendra Modi's vision of a new Jammu and Kashmir". The Minister also said that Fatima has been given a government job. He was accompanied by Lt Governor Manoj Sinha, Union Minister of State (PMO) Jitendra Singh, Chief Secretary Arun Kumar Mehta and J&K Police chief Dilbag Singh. The Home Minister will also chair a high-level meeting on the security situation of the Union Territory later in the day. This is his first visit to the Union Territory after the reading down of the Article 370 from the erstwhile state of Jammu and Kashmir and also gains significance after the killings of 11 civilians in Kashmir this month. --IANS

Addis Ababa, Nov 27 : The number of confirmed Covid-19 cases in Africa reached 8,616,912 as of Friday afternoon, the Africa Centers for Disease Control and Prevention (Africa CDC) said. The Afri […]

Herat : Afghan fans looks on during a friendly buzkashi match in Herat Afghanistan, Friday, Nov. 26, 2021. Buzkashi is a traditional and the national sport of Afghanistan, where players compete to pla […]

Hong Kong, Nov 27 : The Hong Kong government has announced that the boarding and quarantine requirements for those arriving from eight countries in southern Africa will be tightened from Saturday. […]