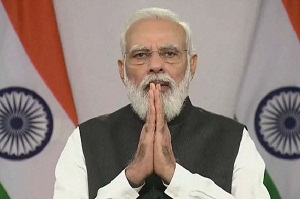 Panaji, Oct 23 (IANS) Instead of exporting raw fish from India, the focus should be on processing marine products, Prime Minister Narendra Modi said on Saturday. "India for the longest time has been exporting raw fish. Indian fish is being processed in East Asian countries after which it hits the world market. To change this reality, the fisheries sector for the first time has been given assistance at a big scale (by the central government)," Modi said, during an interactive session with Chief Minister Pramod Sawant, local bureaucrats and beneficiaries of the schemes launched under the Swayampura Bharat and Atmanirbhar Goa programme. Modi also said that the central government has also formed a separate ministry for Fisheries, while also undertakes steps to modernise fishing vessels. During his virtual interaction with a traditional fisherman from Goa Luis Cardozo, Modi urged fishermen to not limit themselves to the raw market. "Our government is making efforts to ensure that fisherfolk should not limit themselves to the raw market, but benefit from processing," Modi also said. The Prime Minister also said that over the last six to seven years, the central government had taken a lot of steps to empower fisherfolk, which includes extending the Kisan credit card to members of the fishing community, upgrading equipment and facilities in fishing boats as well as developing a special app for sailors. --IANS

Mizoram feeding 15K Myanmarese refugees, sending their kids to school
By Sujit Chakraborty Aizawl, Nov 28 : The tiny northeastern state of Mizoram has been feeding around 15,000 refugees from coup-hit Myanmar, with ab

Panaji, Nov 28 : For more than three centuries, a massive 16th century arch dedicated to adventurer Vasco da Gama served as an ornamental overhang under which Goa's newly-appointed Governors were form […]

By Sujit Chakraborty Shillong/Agartala, Nov 28 : The scientists, who recently discovered a new micro snail species with less than 2 mm in length (adult) in a Meghalaya cave, are conducting a study o […]

By Sujit Chakraborty Aizawl, Nov 28 : The tiny northeastern state of Mizoram has been feeding around 15,000 refugees from coup-hit Myanmar, with about 2,000 Myanmarese kids enrolled in Mizoram gove […]