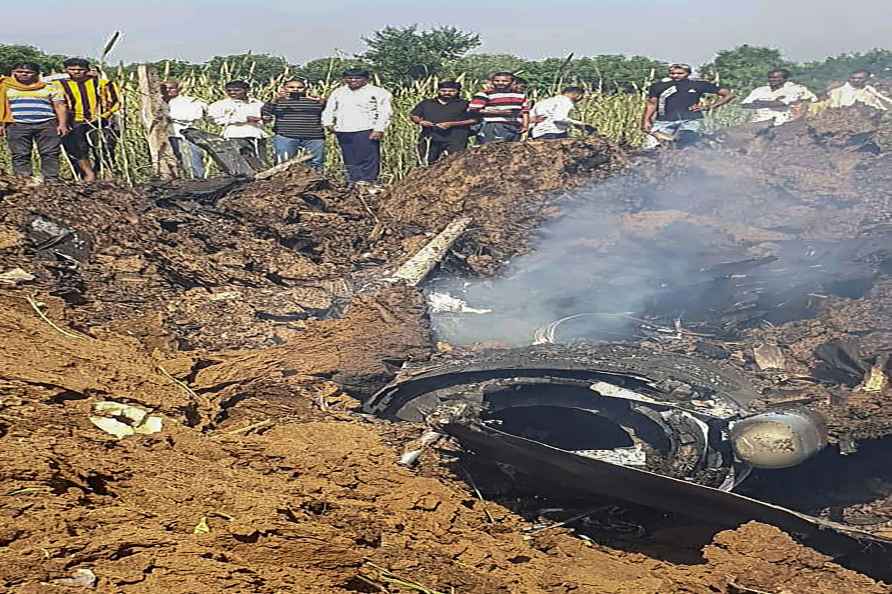 [Bhind: Wreckage of the Indian Air Force Mirage 2000 aircraft lies in a field after the crash at Mankabagh village in Bhind district, Thursday, Oct. 21, 2021. The aircraft experienced a technical malfunction during a training sortie early morning. ( /PTI] Bhopal, Oct 21 : A Mirage 2000 aircraft of the Indian Air Force (IAF) crashed in Madhya Pradesh's Bhind district on Thursday. The incident occurred at Mankabagh village near Barauli area of Bhind, which is around 500 km from state capital Bhopal. The aircraft was being flown by lieutenant Abhilash. A video taken by a local shows pilot gliding down smoothly with the help of a parachute. However, he received minor injuries. Soon after the crash, the plane caught fire, however, the pilot was ejected safely with minor injuries, said a police official in Bhind district. "Villagers spotted the aircraft and informed local police. A team rushed to the spot and started rescue operation," said a senior police official. The aircraft had taken off from Maharajpura airbase in Gwalior in the morning, a senior airport official told IANS. "An IAF Mirage 2000 aircraft experienced a technical malfunction during a training sortie in the central sector this morning. The pilot ejected safely," IAF said adding that an inquiry has been ordered to ascertain the cause of the crash. /IANS

Key Taliban members got scholarships to India
[Monaco: Prince Albert II of Monaco stands for the Monaco national anthem, during a ceremony honoring Joesphine Baker at the Monaco-Louis II Cemetery

New Delhi, Nov 30 : Congress MP Shashi Tharoor offered an apology after he posted his picture on the first day of the winter session of Parliament. Tharoor posted a selfie with six women MPs, in […]