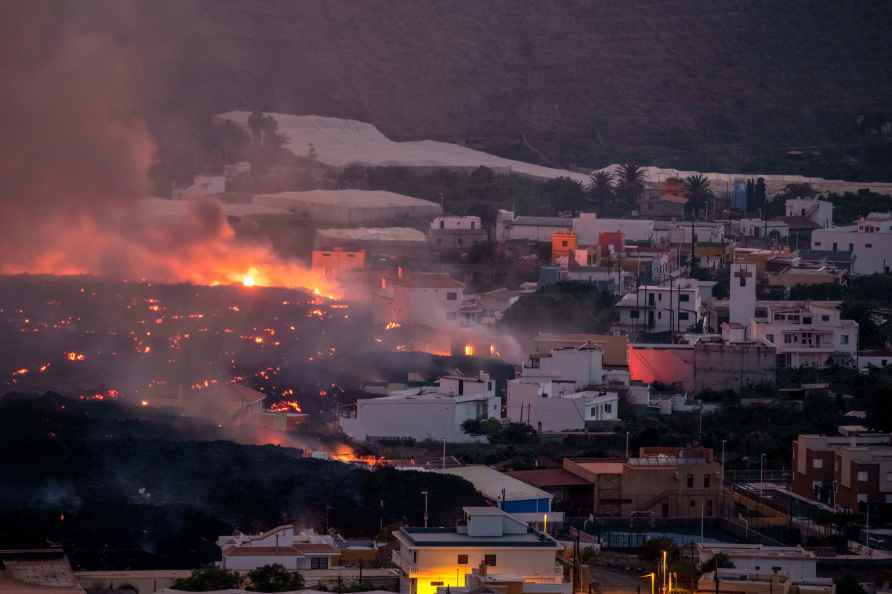 [La Palma: Lava flows from a volcano destroying houses at La Laguna neighbourhood on the Canary island of La Palma, Spain on Thursday Oct. 21, 2021. A second tongue of lava is expected to reach the Atlantic today and release more toxic gases into the atmosphere, an event which will lead to the home confinement of some nearby towns. /PTI] Madrid, Oct 21 : The eruption of the Cumbre Vieja volcano on the island of La Palma, Spain, has now continued for over a month, with experts warning that it is likely spew lava in the "short and medium term". Over 7,000 people from a total population of 85,000 have been evacuated from their homes since the beginning of the eruption on September 19, after a "swarm" of earthquakes affected La Palma in the Canary Island archipelago, reports Xinhua news agency. During its ongoing eruption, the volcano ejected 80 million cubic metres of lava covering over 800 hectares of land on the island that has a surface area of just 708.32 square km. On its route to the coast, the lava has split into four different channels and has destroyed almost 300 hectares of agricultural land, including 52 hectares of vineyards and 128 dedicated to banana plantations -- the island's main crop. Almost 2,000 buildings have been destroyed. One of the flows has reached the sea and created around 40 hectares of new land while a second flow is expected to reach the ocean "in a matter of hours". "We are doing everything that is humanly possible, almost the impossible, to limit the damage," Angel Victor Torres, the Canary Islands regional president, said on Wednesday night as lava moved through the municipality of La Laguna. Meanwhile the island continues to be shaken by constant earthquakes of which over 35,000 have been measured since the start of the event, with the strongest measuring 4.8 on the Richter Scale. An unprecedented drone operation was carried out on Wednesday to rescue stranded dogs. /IANS

Three terrorists killed in Srinagar encounter
[Srinagar: Security personnel stand guard after an encounter with militants near the Rambagh area of the city in Srinagar, Wednesday, Nov. 24, 2021. T

Be careful with banning all cryptocurrencies in India: Experts

New Delhi, Nov 24 : With the Indian government seeking to ban all private cryptocurrencies in the upcoming Crypto bill 2021, experts and leading industry players on Wednesday said that provisions rela […]

New Delhi, Nov 24 : A study has revealed that the highly transmissible Covid Delta variant can infect individuals who have been fully vaccinated against the virus. The study was conducted by the […]

Gurugram, Nov 24 : Panic gripped Delhi-bound Shatabdi express after Gurugram police received a call about a bomb being placed in the train, police said on Wednesday. "The call came to police con […]