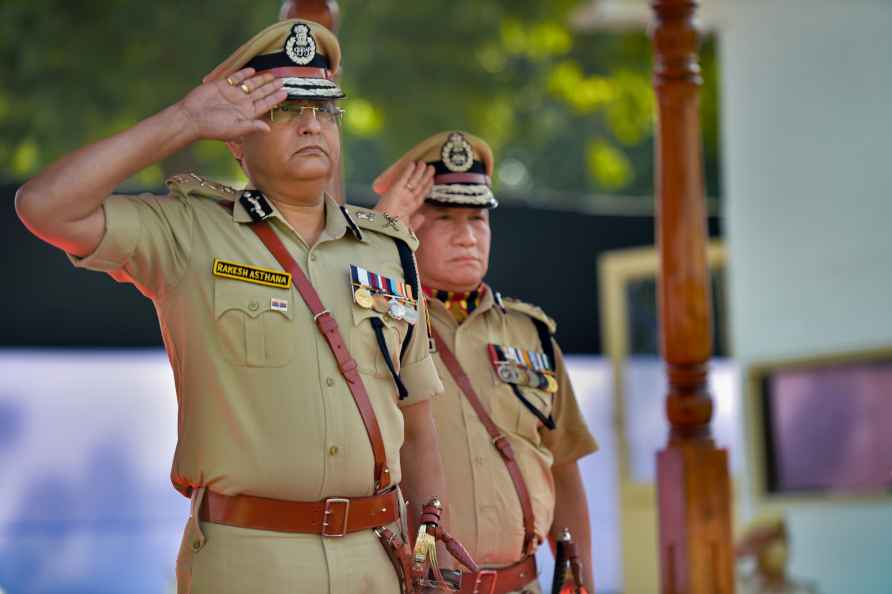 [New Delhi: Delhi Police Commissioner Rakesh Asthana inspects a Guard of Honour during the Police Commemoration Day Parade in New Delhi, Thursday, Oct. 21, 2021. ( /PTI] New Delhi, Oct 21 : Minister of State for Home Affairs Nityanand Rai on Thursday paid tributes to bravehearts at National Police Memorial (NPM) here on Police Commemoration Day 2021. The senior officials of the Central Armed Police Forces and state police forces also paid tributes at NPM on this occasion. Hailing the police forces, Rai said that whenever there is any security challenges before the nation, the police forces have fought it back with brevity. "Whenever the anti-national forces try to disrupt the peace and order in the country, our police forces have dealt it with brevity," he said. The Minister also said that the security forces have also contributed a lot to reduce the impact of the climate change by planting lakhs of trees. Speaking at the occasion, the Intelligence Bureau Director Arvind Kumar said that a total of 377 policemen have sacrificed their lives in the line of the duty while 2,458 police and Central Armed Police Force (CAPF) personnel fell prey to Covid-19 pandemic. In a message on this occasion, PM Modi said that he acknowledged the outstanding efforts made by the police forces in preserving law and order and assisting others. "I pay homage to all those police personnel who lost their lives in the line of duty," he said in a message. "The Police forces are the finest example of courage, patience and diligence. On Police Memorial Day, on behalf of the nation, I pay homage to all brave soldiers who made their supreme sacrifice to protect the nation's sovereignty. The sacrifices and dedication of every policeman inspire us to serve the nation", Union Home Minister Amit Shah said. To honour the Police personnel who sacrificed their lives in line of duty for National Security, the idea of setting up a National Police Memorial in Delhi was approved by Ministry of Home Affairs in 1992. The Prime Minister dedicated the National Police Memorial, Chanakyapuri, New Delhi, to the nation on Police Commemoration Day on October 21, 2018. Police and CAPF personnel played a significant and frontline role as Covid warriors with little regard to their own safety in 2020 and 2021. As a result, 2,458 Police and CAPF personnel fell prey to the coronavirus, in the line of duty, while contributing to Covid management and this year the Police Commemoration Day was dedicated to these police personnel. /IANS

Samsung likely to double shipments of Exynos processors in 2022

Seoul, Nov 28 : South Korean tech giant Samsung is reportedly pushing to increase the number of Galaxy phones with Exynos power. According to Android Authority, this could lead to Samsung doubli […]

New Delhi, Nov 28 : Various sectors in the Water, Sanitation and Hygiene (WASH) and Waste Management field can collectively attract $8 billion investments by 2030, up from $3 billion in 2020, and cre […]

Fatorda (Goa), Nov 28 : Having kickstarted their campaign with a win, Chennaiyin FC will look to carry forward the momentum when they take on NorthEast United FC in their second 2021-22 Indian Super L […]