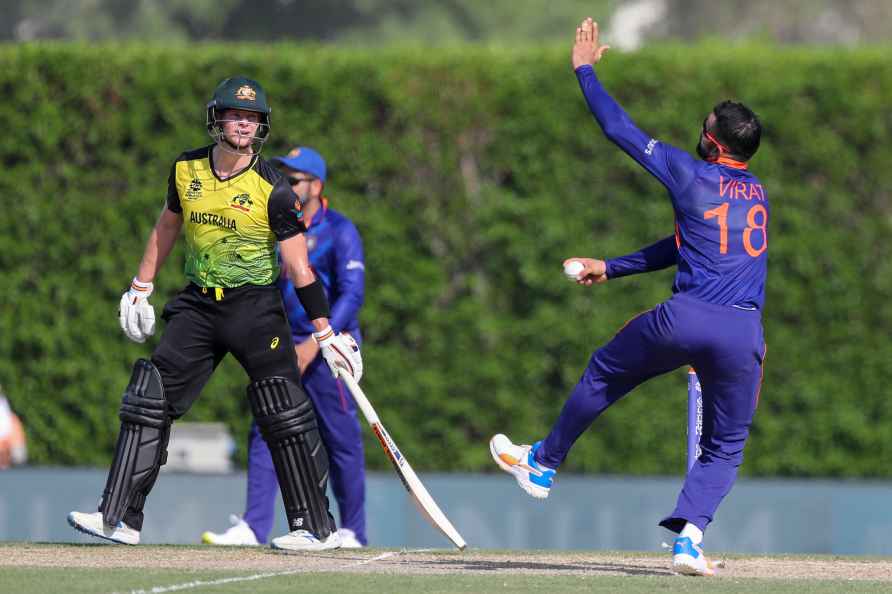 [Dubai: India's captain Virat Kohli, right, bowls as Australia's Steven Smith watches during the Cricket Twenty20 World Cup warm-up match between India and Australia in Dubai, UAE, Wednesday, Oct. 20, 2021. /PTI] Dubai, Oct 20 : India vice-captain Rohit Sharma on Wednesday said that all-rounder Hardik Pandya is coming along pretty well and he should be ready to bowl when the team starts its T20 World Cup campaign against Pakistan on October 24. The 34-year old Rohit is leading the team in the warm-up game against Australia as Virat Kohli has been rested. Apart from Kohli, pacers Jasprit Bumrah and Mohammed Shami have also rested from Wednesday's warm-up game. "Hardik is coming along pretty well, but it'll be a while before he will start to bowl. He hasn't started bowling, but he should be ready by the start of the tournament," said Rohit at the toss of the warm-up match against Australia. "We have quality in the main bowlers, but you need an option for a sixth bowler," he added. Hardik's fitness is a concern for the India team heading into the tournament as he gives the much-needed balance with his all-round ability. However, his place in the Indian squad for the ICC T20 World Cup has also been under scrutiny for a while as many former India cricketers have been questioning his inclusion just as a specialist batter as the all-rounder has not been bowling at all. He bowled a bit during India's tour of Sri Lanka but he spent the entire UAE leg of the Indian Premier League (IPL 2021) as a specialist lower middle-order batter for Mumbai. India vice-captain also mentioned that the team is not worried about the balance but it's always nice to have more options in bowling. "Possibly, we need to find that sixth option. Myself, Virat and Suryakumar, all those guys need to come in and bowl to see who can be that sixth option," Rohit said. "Not really worried about the balance. Even if you play with five bowlers, we have got the quality. But always you need that sixth option to free your bowlers, in case someone has a bad day. It's always nice to have options when you're playing a tournament as big as the World Cup," he added. India had beaten England by seven wickets in their first warm-up game on Monday. /IANS

Mumbai, Dec 4 : Popular singer Kumar Sanu recreated the song 'Yeh Kaali Kaali Ankhen' from the movie 'Baazigar' to mainly sing the rap part of the song on 'Sa Re Ga Ma Pa'. Sanu is appearing as […]