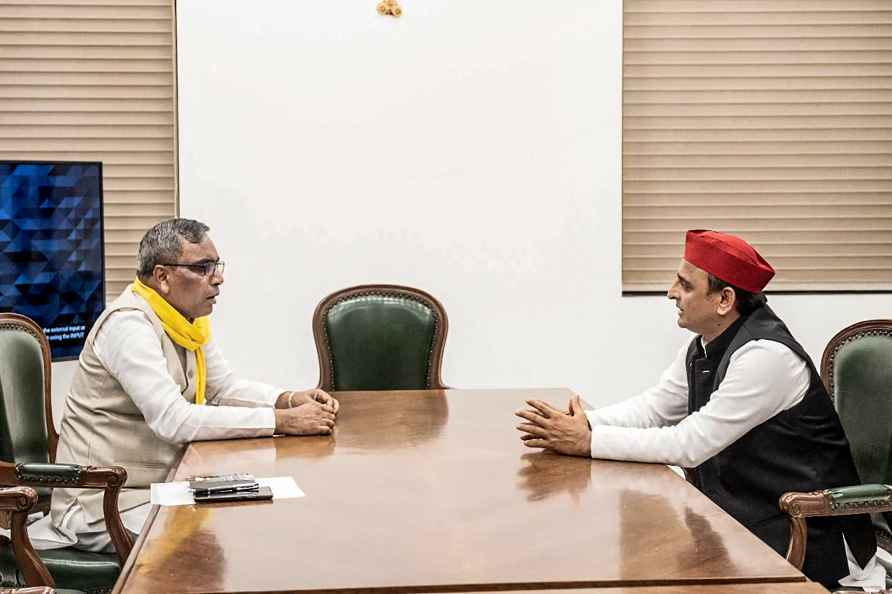 [Lucknow: Suheldev Bharatiya Samaj Party President Om Prakash Rajbhar meets Samajwadi Party President Akhilesh Yadav, in Lucknow, Wednesday, Oct 20, 2021. ( /PTI] Lucknow, Oct 20 : In another political development, Suheldev Bhartiya Samaj Party (SBSP) President and former UP minister, Om Prakash Rajbhar, had an hour-long meeting with Samajwadi Party President Akhilesh Yadav on Wednesday. Talking to reporters after the meeting, Rajbhar said that he had invited Akhilesh Yadav to his rally in Mau on October 27 and he had agreed. "I urged him that we should all contest together to defeat the politics of hatred which is being practiced by the BJP and he agreed. He also said that farmers, youth and weaker sections of society were unhappy with the state government," he said. Asked about seat adjustment, he said: "Even if he does not give us a single seat, we will still be with the SP." Rajbhar, however, was evasive when asked if the AIMIM of Asaduddin Owaisi was still a part of his Bhagidari Sankalp Morcha. "All your questions will be answered on October 27," he said. The AIMIM had reacted very strongly last week when Rajbhar said that if the BJP accepted his demands, he had no qualms about returning for an alliance. /IANS

Starc, Head in as Cummins announces his Ashes Playing XI
[Brisbane: Australian captain Pat Cummins, left, and England captain Joe Root pose with the Ashes trophy at the Gabba cricket ground ahead of the firs

Starc, Head in as Cummins announces his Ashes Playing XI