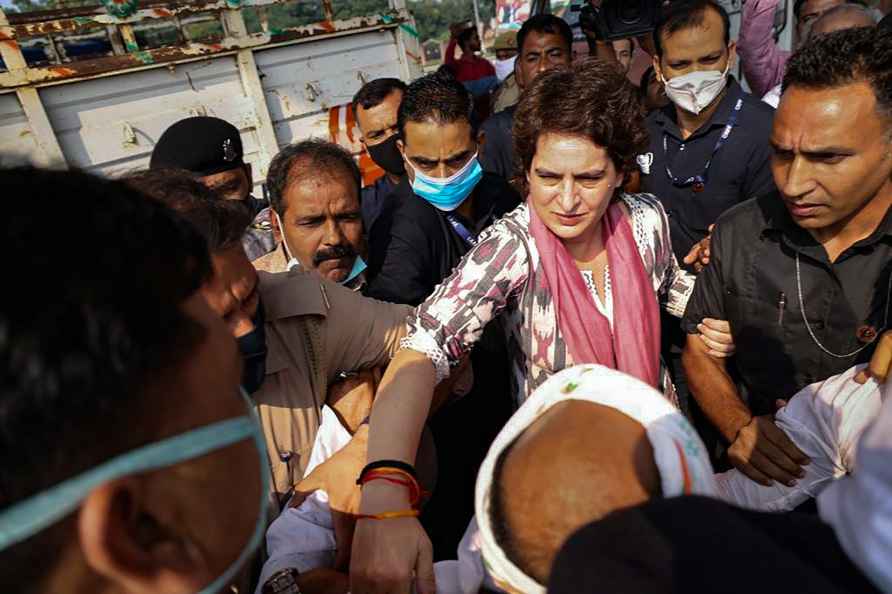 [**EDS: IMAGE POSTED BY @INCUttarPradesh** Agra: Congress General Secreatry Priyanka Gandhi Vadra on her way to meet the family of Arun Valmiki, who allegedly died in police custody, in Agra,Wednesday,Oct 20, 2021. ( /PTI] Lucknow, Oct 20 : Congress leader Priyanka Gandhi Vadra has been detained by Lucknow Police at the Lucknow Expressway while she was travelling to Agra to meet the family of a Dalit man who died in police custody. Her car was stopped at the first toll plaza on the Lucknow-Agra Expressway. Earlier this month, Priyanka had been detained in Sitapur while she was on her way to Lakhimpur to meet families of farmers killed on October 3. After she was stopped, Priyanka Gandhi Vadra tweeted: "What is the government so afraid of? Arun Valmiki died in police custody. His family is seeking justice. I want to visit that family. What is the Uttar Pradesh government afraid of? Why am I being stopped? Today is Lord Valmiki Jayanti... Prime Minister Narendra Modi spoke big on Buddha but this is attacking his message." The police spokesman said that the Congress leader was stopped as she did not have the requisite permissions. Chaotic visuals from the scene went viral on the social media showing Priyanka Gandhi surrounded by a number of people, including policemen, as she tried to make her way past the blockade. Another visual showed a police official standing in front of her vehicle, with both hands placed firmly on the hood. In a video of the conversation between the Congress leader and the police, she can be heard asking: "Wherever I go, do I have to ask for permission?" to which the officer says it is a "law and order issue". In another visual, Priyanka Gandhi is seen posing for selfies with a few women police officers as party workers can be heard shouting in the background. Earlier on Wednesday, Arun Valmiki, a 'safai karamchari', who had been arrested in connection with the theft of Rs 25 lakh from the police strong room, died after his health deteriorated during interrogation. Senior Superintendent of Police (SSP) Agra Muniraj G said he fell sick on Tuesday night while a raid was being carried out at his house. He was then taken to a hospital but doctors declared him dead, he said. Arun was accused of stealing the money on Saturday night from a building that served as the police station's evidence locker, and where he worked as a cleaner. Arun's family claimed that he died due to custodial torture. /IANS

Bhubaneswar, Nov 20 : Odisha police have seized snake venom of over 1 kg whose market value will be around Rs 1.50 crore and arrested two persons in this connection, police officials said on Saturday. […]

Rohan Solomon: Even a Grammy submission is a feeling of validation

By Durga Chakravarty New Delhi, Nov 20 : Singer-songwriter and producer Rohan Solomon's track 'We Demand Change' has been submitted for consideration for a Grammy under the 'Best Rock Performance' c […]