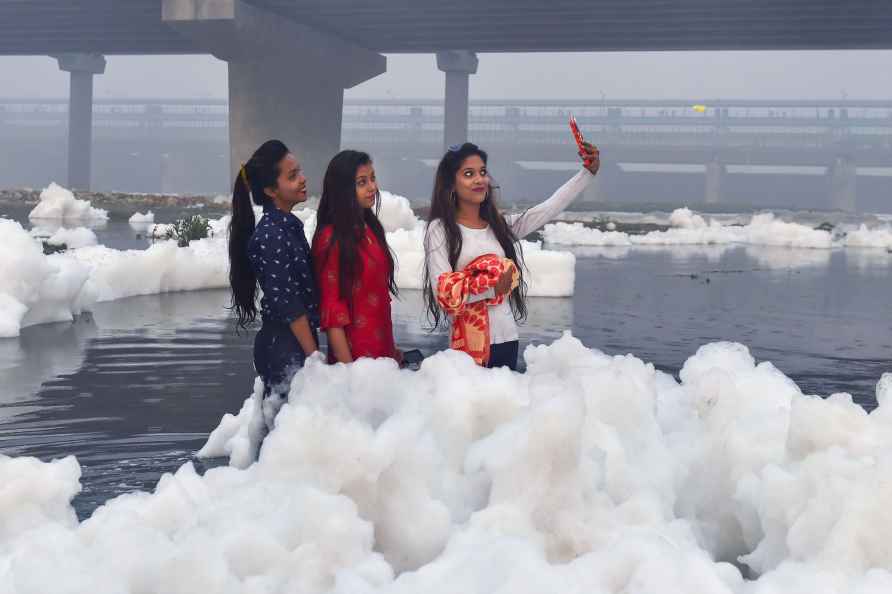 New Delhi, Oct 16 : Despite ban on idol immersion in river Yamuna along with other natural water bodies in the national capital, several Delhiites have flouted the Delhi Pollution Control Committee (DPCC) norms issued a day before the 'visarjan' (immersion) ritual. On Saturday morning, Yamuna Ghat at the ITO was found littered with idols, other religious material and waste. DPCC, the Delhi government's pollution control body, in its October 13 order said the idol immersion should not be allowed during the forthcoming Durga Puja and other festivals etc in any public place, including river Yamuna or any other water body, ponds, ghats etc. "Consequent pollution of such water bodies has been a matter of concern. In addition to silting, toxic chemicals used in making idols tend to leach out and pose serious problems of water pollution. Studies carried out to assess deterioration in water quality due to idol immersion reveal the deterioration of water quality in respect to conductivity, biochemical oxygen demand and heavy metal concentration," the order had said, adding that instead, the idol immersion ritual may be performed within the home premises in a bucket and container etc. Immersion has once again highlighted the plight of Yamuna, a river whose catchment covers parts of Uttar Pradesh, Uttarakhand, Himachal Pradesh, Haryana, Rajasthan and Madhya Pradesh in addition to that of Delhi, is most polluted in and around the national Capital. The top pollution sources emanate from Sewage Treatment Plants (STPs), untreated water from unauthorised colonies as well as sewer from authorised colonies. The DPCC order had directed District Magistrates to enforce guidelines related to idol immersion, adding that each violator will be liable to pay Rs 50,000 to the Delhi pollution control body. A clean and pollution-free Yamuna has been the poll promise of the Delhi government for more than 25 years now. The first Yamuna Action Plan (YAP) for which a loan agreement was signed in 1992 aimed at improved water quality conservation in the river and hygienic environment in the river basin. /IANS

Now Sangam to light up with 5 lakh diyas
Prayagraj, Nov 12 : After 'Deepotsav' in Ayodhya, Prayagraj will now be lit up with around five lakh diyas at the Sangam area, the confluence point of

Mumbai, Nov 15 : The Congress has nominated Dr. Pradnya Satav -- the widow of the late MP Rajeev Satav as the party candidate for the upcoming by-elections for a single seat to the Maharashtra Legisla […]

Chennai, Nov 15 : BJP national General Secretary C.T. Ravi on Monday called upon the Tamil Nadu government to provide Rs 5,000 to each family below poverty line who are affected by the incessant rains […]